A Moscow court Tuesday postponed the first hearing in the trial of the three suspects in the January acid attack on Bolshoi Ballet artistic director Sergei Filin, disappointing a swarm of media who caused a stampede when entering the courtroom.

A judge at the Meshchansky District Court delayed the hearing in the trial of Bolshoi dancer Pavel Dmitrichenko, and his two associates Yury Zarutsky and Andrei Lipatov, until next Tuesday at the request of Zarutsky and his lawyer Sergei Kupriyanov, who was absent due to participation in another trial.

"Kupriyanov is the only lawyer for Zarutsky, therefore his right to a defense will be violated if the trial begins without him," Judge Yelena Maximova said.

Also missing on Tuesday were Filin, who failed to provide an explanation for his absence, and his lawyer Tatyana Stukalova, who was on a business trip. Some witnesses also failed to appear in court. Maximova said procedural rules required all the parties to be present in order to start the trial.

About 100 Russian and foreign reporters waited more than two hours for the hearing, which opened after a 90-minute delay and lasted just 15 minutes.

The journalists spent the majority of the time in a crowd pressed against one another, but ran forward, pushing one another and screaming, when the court's press officer led them to the courtroom.

An unidentified attacker splashed acid on Filin's face outside of his apartment building late in the evening Jan. 17, damaging his skin and eyes. Filin has since undergone 23 eye surgeries, as well as a number of plastic surgeries, while recovering in Germany, restoring his skin and partially restoring his eyesight. He returned to Russia last month. 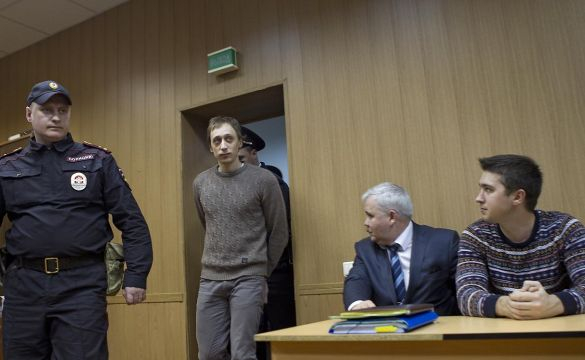 Dmitrichenko being led into the courtroom before Tuesday’s proceedings. A judge put off the start of the trial.

At previous court hearings ordering the detention of the suspects, Dmitrichenko, who is accused of organizing the attack on Filin, pleaded partially guilty. He said he had agreed to Zarutsky's offer to help him take revenge on Filin over a work dispute, but thought Zarutsky would only scare the ballet director.

"I do not admit that I am guilty," Dmitrichenko told reporters after being led into a metal courtroom cage with his two co-defendants.

Zarutsky pleaded guilty to carrying out the attack, while Lipatov admitted that he drove Zarutsky to the site of the attack but did not know what his passenger was doing there.

The three defendants face up to 12 years in prison if convicted on charges of causing grave physical injuries to Filin.

Dmitrichenko has said he talked with Zarutsky about corruption at the Bolshoi and accused Filin of playing favorites when distributing the theater's finances.

The dancer's mother, Nadezhda, who referred to Dmitrichenko as the family's most talented son, told reporters Tuesday that she and her husband Vitaly believed their child was innocent and hoped he would be acquitted.

The reputation of the Bolshoi, which has not removed Dmitrichenko's picture from its list of soloists, has suffered since the attack and saw the dismissal of longtime head Anatoly Iksanov in July.

Spokeswoman Katerina Novikova said Monday, "A crime was committed. It must be solved. If Pavel's guilt is proven, he should be punished," adding: "In any case, for us this situation is tragic — it involves our friends and colleagues."

Novikova said she was not sure to what extent Filin, who now wears dark glasses to protect his eyes, would be able to continue his work.