Prime Minister Dmitry Medvedev on Thursday appointed a former deputy defense minister to head the Federal Space Agency in a move that is part of a broader revamp of the industry.

Retired Colonel-General Oleg Ostapenko is replacing retired General Vladimir Popovkin, as the government is looking to give a shot in the arm to the country's struggling space industry plagued by humiliating launch failures. President Vladimir Putin had dismissed Ostapenko as deputy defense minister earlier on Thursday.

Medvedev made clear that he bet a lot on the new chief of the space agency, also known as Roscosmos.

“I hope that a whole number of problems that unfortunately have lately been observed in Roscosmos activities will be overcome with your arrival,” Medvedev said in a meeting with Ostapenko. “I hope that all launches, including future ones, will be carried out in accordance with our plans.”

Before Ostapenko's promotion to deputy defense minister in November, he served as commander of the space forces from June 2008.

Ostapenko's appointment appears to be the first step in a two-pronged effort to make the industry get its act together after a series of embarrassments, the latest being the fall of a Proton rocket carrying satellites just seconds after liftoff in July.

In one change, the government is aiming to strip Roscosmos of its powers to influence day-to-day business decisions at many of the industry's companies as the government's agent on their boards and management teams. The agency will hold on to its role as policymaker, dispenser of contracts, supervisor of research and operator of launch pads. 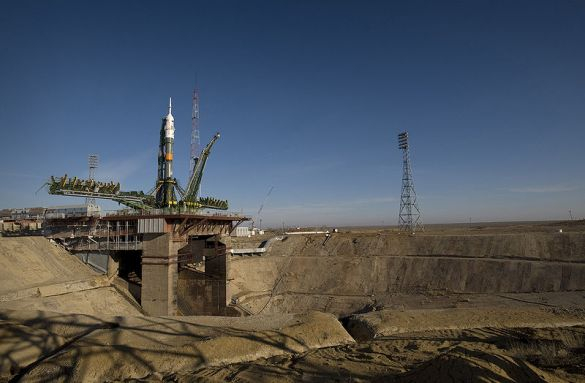 A Soyuz rocket being positioned at the Baikonur Cosmodrome in Kazakhstan in 2009.

In the other change, the government is seeking to create an enormous corporation that would soak up the majority of companies manufacturing rockets and satellites, in a move that it hopes will reduce imports of parts and give the manufacturers more of a competitive edge, compared with foreign rivals. That new entity would go by the name of United Rocket and Space Corporation.

President Vladimir Putin is considering the proposal and is expected to put the changes in motion with a decree in the near future. Deputy Prime Minister Dmitry Rogozin, who spearheads the effort to streamline the industry, said after a meeting with Putin on Wednesday that the president backed the idea.

Although the unfortunate launches underlay the drive for restructuring the industry at the start, Rogozin changed tack in his most recent pronouncements on the subject. At the meeting with Putin, he said the key task of the consolidation was to diminish the reliance on imported equipment by spurring research and development.

“Our main problem is the supply of components,” he said in a meeting with Putin on Oct. 9. “In order for us to be independent of their imports — and we understand that … certain countries use their export controls, basically, to prevent us from buying all we need — this system will allow us to concentrate the funds and research on creating our own production of these components.”

Imports account for 75 percent of parts used in building satellites.

Rogozin stressed that the amalgamation in the industry must leave room for competition of ideas about technology and design.

Dmitry Payson, the development director of the space research center at Skolkovo Foundation, said this means that the government understands the need to preserve Russia's various schools of thought on building rockets and other spacecraft.

“All this does not have to boil down to creating a supermonopoly that will give the state only one option,” he said.

Andrei Ionin, member of the think tank, the Tsiolkovsky Space Science Academy, said a lower accident rate was not the main reason for the changes. A large corporation, however, would be more likely to improve quality control in the industry than current dozens of separate players, which he described as “small” by worldwide standards.

“It is a least a precondition for a better quality of management,” he said of the possible emergence of United Rocket and Space Corporation.