Ilham Aliyev was headed to win Wednesday's presidential election in the former Soviet republic of Azerbaijan, in what some analysts say is the perfect demonstration of how oil revenues can strengthen a country's leader both domestically and internationally.

During the decade that Aliyev ruled the country after succeeding his father in 2003, Azerbaijan's economy expanded almost tenfold. Following the launch of the Baku-Tbilisi-Ceyhan pipeline in 2005, which brought Azeri oil straight to the West, Azerbaijan enjoyed the status of the fastest-growing economy in the world from 2005 to 2007.

It is in this context that Aliyev was able to secure his family's grip on the country domestically and avoid facing a tough choice between moving toward Europe or Russia.

And it seems that Aliyev's presidential victory was seen as a given ahead of the vote.

According to EurasiaNet.org, florists in Baku were already prepaid for flowers for Aliyev's inauguration ceremony at the Heydar Aliyev Center, a facility named in honor of his father, who ruled Azerbaijan from 1969 until 1982 and then from 1993 until he died in 2003.

Today, Aliyev, who presides over an extended family whose interests are spread across the globe, has managed to tread between Russia and the West. The situation has prompted some to call him Michael Corleone — as he was reportedly referred to in U.S. embassy cables — the head of the fictional Italian Corleone family in Francis Ford Coppola's film "The Godfather."

According to one analyst, Azerbaijan has an advantageous position that keeps it free from outside pressure, and Aliyev is fully aware of that strength.

"The South Caucasus is divided quite evenly: Russia is influential in Armenia, and the West has Georgia. Azerbaijan is the only neutral state that has an opportunity to balance its interests as its elites see fit," said Alexei Vlasov, executive director of the North South research center.

"Aliyev says he will not join the customs union, but he also will not rush into the partnership with the EU, as he knows very well just how long Turkey has been sitting in that waiting room," he said.

The Kremlin has been seeking to lure former Soviet states into its customs union, with Ukraine, Moldova and Georgia resisting the courtship so far. Armenia, Azerbaijan's main enemy in the Nagorno-Karabakh conflict, recently succumbed to Russia's advances.

And while Azerbaijan has kept a certain distance from Russia, some observers say ties are closer than they seem.

Russia's connections with Azerbaijan seemed to come to the foreground when Rustam Ibragimbekov, 74, tried to register as a candidate for Azerbaijan's presidential race. The Oscar-winning scriptwriter was poised to be the front-runner oppositional contender, but he was disqualified over his dual Russian-Azeri citizenship.

He requested that his Russian citizenship be revoked, but that did not happen in time for him to get back into the race, and he says the apparent delay in the process signified a deal between the two countries. He was ultimately replaced in the campaign by a history professor, Jamil Hasanli, 61. 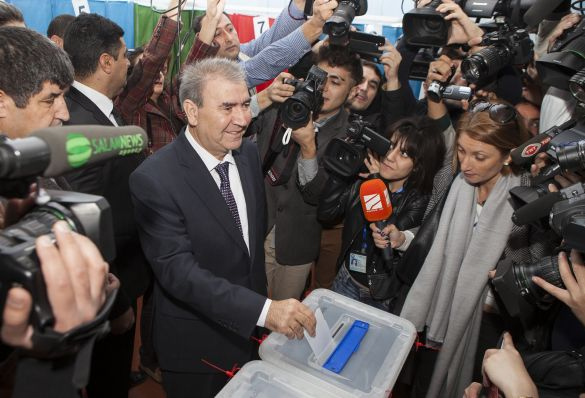 Jamil Hasanli, the opposition candidate, casting his vote on Wednesday.

"Everybody was saying that I am the Kremlin's protege, but it seems that Aliyev is the real Kremlin stooge," Ibragimbekov said over the phone from Tbilisi.

Ibragimbekov said it all boiled down to oil: Europeans will not be able to resist the temptation of having Azeri oil and thus will turn a blind eye to multiple violations in electoral procedures, he said.

"When I was running for president, I went around Europe to meet with officials. They kept saying there was nothing they could do because money is very important in Europe," he said.

Vladimir Churov, chairman of Russia's Central Elections Commission, said in Baku that "presidential elections in Azerbaijan were organized in line with international standards," according to a press release on the local Central Election Commission's website.

Thanks to the 2009 referendum that abolished term limits for presidents, Aliyev can now rule for life. But as the country becomes more prosperous, there will likely be more people among the middle class who will demand more influence over public life.

"People are more prone to protest when they can afford to have aspirations in the public sphere," Vlasov said. "Such risks exist in any country that survives by redistributing oil wealth, including Azerbaijan," he said.

In addition, while Azerbaijan will still have the ability to maintain its neutral stance and maneuver between Russia and the West, it will be under increased pressure from both sides.

"The stakes will get bigger in the South Caucasus as Russia and the West will want more from Azerbaijan. At the same time, despite the dynastic rule that makes Russia more likely as a partner,  as long as the Kremlin supports Armenia in the Nagorno-Karabakh conflict, Azerbaijan will not move closer to Moscow," said Elhan Sahinoglu, head of the Atlas political research center in Baku.

Slutsky promised to “modify” the party’s political strategy ahead of local elections in September.