High-end supermarket chain, Azbuka Vkusa, is planning to buy a chain of supermarkets in the Moscow region, the first such acquisition in Azbuka's 22-year history, a source familiar with the negotiations said Monday.

The eight stores in Azbuka's sights, which currently operate under the trade name of international retailer Spar, have a total floor area of more than 10,000 square meters in the towns of Zhukovsky, Ramensky, Dmitrov, Voskresensk and Electrostal.

Besides this, the company will gain 6,000 square meters of warehouse space and facilities for food production.

Azbuka Vkusa's CEO Vladimir Sadovin confirmed the negotiations, Vedomosti reported. The company filed a request to the Federal Anti-Monopoly Service on Monday, and the deal is set to be closed in November, Sadovin said.

Mikhail Burmistrov, head of the analytical agency Infoline-Analitika, said the deal might be worth up to $120 million, considering that the Moscow region's chain, whose stores closely match those of Azbuka Vkusa in product quality, was both debt-free and efficient. 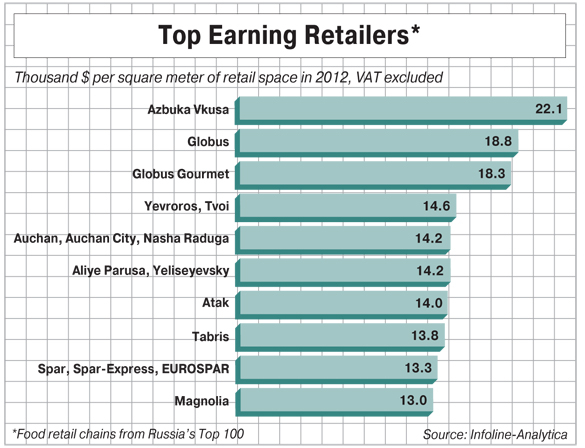 Sadovin said Azbuka Vkusa, which had revenue in 2012 of 26 billion rubles ($810 million), would be relying on its own funds for the purchase.

A spokeswoman from SVA Trading, which currently owns Spar together with SVA Region, confirmed that her company is selling the asset to Azbuka Vkusa but did not specify the reasons for the sale nor the amount of the deal.

Azbuka Vkusa started as "two tables selling chewing gum and lighters" in 1991, Sadovin said in 2006, before opening its first permanent store in 1997. While the company has mulled acquisitions before, this deal will be its first.

Prosecutors asked for Russian journalist Maria Ponomarenko to be sentenced to nine years in jail on Tuesday, the Kommersant business daily reported, citing...
Theater of the Absurd

A Russian court in the Siberian city of Chita has fined a local man for speaking to the press about the fine he had previously received for sharing a dream...