A racetrack is the only place to check the real performance of a Porsche Boxster S, a two-seat rocket on wheels. So I set my sights on the Moscow Raceway, the sole international-level circuit in Russia.

From the moment that I nudged the gas pedal of the Boxster S and heard the powerful purr of the 315-horsepower engine directly behind the leather seat, it was clear that no Moscow street could unleash the car's full potential. Upping the ante, Porsche promised that the vehicle could accelerate from 0 to 100 kilometers per hour in a mere 4.8 seconds and deliver a top speed of 277 kph.

Facts at a Glance

So I secured permission from Porsche Russland, the carmaker's local office, to put the Boxster to the test.

Several phone calls and e-mails later, the folks at Moscow Raceway agreed to give a photographer and me a couple of hours on their 4-kilometer track if we covered the cost of keeping an ambulance on standby. (The ambulance wasn't a special requirement for me; any racing enthusiasts who use the track have to pay.)

A thrill shot through me as I stood in the Moscow Raceway's pit lane on a recent Friday, the morning sun gleaming off the sleek silver Boxster and the open track begging for some action.

But first I had to drive a slow lap with a Moscow Raceway official, who pointed out the most dangerous curves ("People have the most problems crashing on this turn") and checked that no parts of the road or roadside were damaged ("Sign here to show that the track is in perfect condition").

After signing the paperwork and dropping off the raceway official, the car and track were all mine.

Shoving the pedal to the floor, another thrill rushed over me as the engine roared to life. Tires squealing, I drifted into my first turn.

The next two hours passed in a blur.

The top speed that I managed to reach was 212 kph on the longest straight stretch of the track. After a few laps, I dropped down the convertible top — and kept it down. The howling wind in my ears as the engine rumbled with a deep-throated growl served up a plate of pure adrenaline.

And, no, I didn't end up making use of the paramedics. 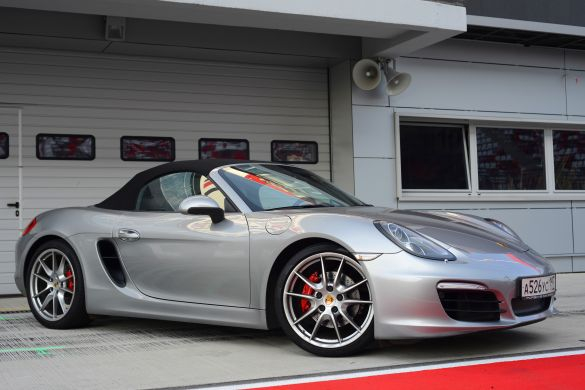 The small vehicle, pictured on the Moscow Raceway's pit lane, is easy to park, especially with its ParkAssist system.

Quite frankly, everything about the Boxster S is hot, including:

*The seven-speed Porsche Doppelkupplung, a dual-clutch transmission with manual and automatic modes.

*A 7-inch high-resolution touchscreen that is the focal point of the car's central information and communication system. It contains, among other things, a navigation system, a sound system, a parking system, Bluetooth and a DVD player, and can be controlled by voice or a press of a button or the screen.

* A high-resolution 4.6-inch color screen behind the steering wheel that provides a running stream of data from the onboard computer, including the navigation system map and alerts on various issues such as tire pressure and the distance to the curb.

* A Bose Surround Sound System with 10 loudspeakers, including a subwoofer concealed behind the dashboard.

* The convertible top, which with a flip of a switch opens or closes in just nine seconds.

Then there's the key, which also acts as a remote. The device, shaped like a toy car, contains four buttons for locking and unlocking the car and opening the front and back trunks. To start the ignition, the gadget slides into a keyhole on the left side of the steering wheel.

The Boxster S also comes with a "wow" factor. During the five-day test drive, everyone seemed to be staring with envy at the car, from the gray-suited gentleman driving a KIA van and a middle-aged woman in a hatchback to a group of Central Asian construction workers gawking at the side of the road.

The low-slung Boxster hugs the road, which looks awesome and is terrific for racing but can create a parking problem in Moscow.

My apartment courtyard offered scant opportunities for parking because the Boxster's bumpers couldn't go over the curbs.

Making matters worse, I found myself boxed in one morning by an old Volga sedan. Any ordinary car could have gotten out of the jam by backing up onto the sidewalk and pulling around the Volga. But the Boxster's low clearance meant that I spent a nerve-wracking 20 minutes inching the car backward and forward in an attempt to get out for an urgent meeting.

In this case, the car's ParkAssist system saved the day by showing the precise distance between the Boxster, the Volga, the sidewalk and another adjacent vehicle as I squirmed my way to freedom.

The solution to the parking problem would be to own a garage or a spot in a parking lot or garage.

With a sleek appearance, a roaring engine and an unquenchable thirst to race, the Boxster S boils down to three ingredients: Sexy, Sound and Speed. Perhaps that's what the "S" in its name should really represent.


Video: Go on a lap around the Moscow Raceway in this video shot from a bumper-mounted camera. (Vlad Keeko / For MT)

Democratic standards worldwide improved slightly in 2022 after the lifting of Covid-19 restrictions, but plummeted further in Russia following...
leave the past behind

Rescuers searched for survivors in the rubble of an apartment building in eastern Ukraine on Thursday after a Russian strike destroyed it, as Kyiv said...