A statue from a tragic time returned to the southern city of Volgograd on Friday as President Vladimir Putin met with bikers and World War II veterans for the unveiling of the Detskiye Khorovod (The Children's Dance) fountain.

A picture of the fountain taken by Emmanuil Yevzerikhin on Aug. 23, 1942, conveyed the devastation of the Battle of Stalingrad by juxtaposing a pastoral scene of children dancing around a playful crocodile and the city's bombed-out, burning buildings in the background.

On the day the photograph was taken, about 40,000 civilians lost their lives to Nazi air strikes, according to official statistics.

The government tore down the fountain after the war, apparently not considering it worth saving for cultural or historical value.

“One of them [the symbols] in prewar Stalingrad was this fountain and group of dancing children. It symbolized joy, life, carefreeness,” Putin said.

The president also noted that Friday marked the 70th anniversary of the end of the Battle of Kursk, in which the Red Army scored a crucial victory over Nazi forces in Kursk, a city about 500 kilometers south of Moscow. 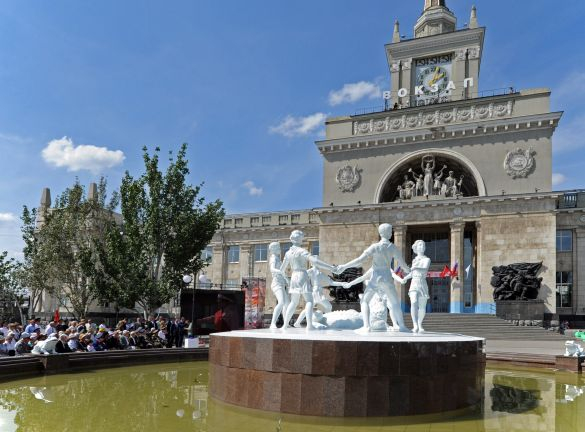 Veterans in Volgograd attending the unveiling of a replica of a fountain that survived heavy bombing during WWII.

Eminent Moscow sculptor Alexander Burganov was charged with creating an exact replica of the original fountain by referencing newsreels and war photographs where its image survived.

The bikers also gave the city a smaller copy of the monument, which was placed near the Battle of Stalingrad museum.

At the unveiling ceremony Friday, Zaldostanov told the story of the monument to the assembled veterans and to Putin, who had met many of the former soldiers during his previous visits to the city.

One woman thanked Putin for fulfilling his promise to visit Volgograd more regularly, while another asked him for help solving a problem with her building's elevator.

A Ukrainian family was reportedly told they had “been in Russia too long" by border guards.