Moscow's cultural elite seems to view the provinces as an artistic wasteland, brightened only by occasional outposts of inspiration. Indeed, cultural institutions outside the capital are limited, struggle with finances and often simply fail. However, there are bright spots which belie this seemingly dreary artistic landscape.

The annual sculpture festival "Autumn. Inspiration. Penza," held near the central Russian city of Penza, provides a rare example of a cultural event in Russia's provinces that has achieved considerable success and renown. This year, the festival is taking place from Aug. 18 to Sept. 11 and has attracted 73 artists from 23 countries, according the PenzaInform news agency.

While the first five years of the festival concentrated almost exclusively on sculpture, this year the festival aims to widen its focus and attract a broader range of artists. "While before only sculptors came and worked on the territory of the park, this year excellent artists, cinematographers and designers will be here," said Konstantin Volkov, the chairman of the festival, in an interview with RIA Novosti.

As part of these efforts, the festival includes lectures and presentations by prominent Russian and world cultural figures, such as a round table discussion on cultural politics with panelists including Russian gallery owner Marat Guelman  and Nikolai Novichkov, an adviser to the Russian culture minister. Guelman is notable for having previously attempted to bring more culture to the provinces through his support of the Perm Museum of Modern Art and the now-closed Tvertsa Gallery in Tver.

The festival hosts a range of workshops, galleries and a museum in addition to the traditional open-air sculpture exhibition. Sculpture will remain the main subject of the festival, with the theme for this year's works being "movement." 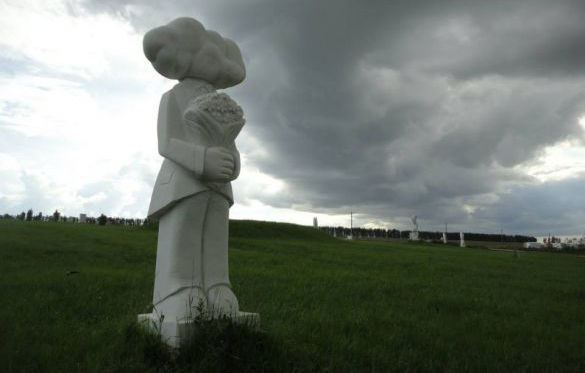 The participants traveled to Penza and created their sculptures on site, using facilities provided by the festival organizers and an array of materials including wood, glass, marble, granite, bronze, aluminum and other metals. One participant from Israel, Itzik Iluz, has even created sculptures that the festival website describes as being made of light. In addition to the sculptors, 27 painters, mostly from Russia and the former Soviet Union, will present works in the festival's galleries.

Previous years have seen a similar wealth of new creations, and all of the sculptures made for festivals in years past have remained, forming what is now known as the Legenda sculptural park.

Located at the Chistiye Prudy tourist base in Ramzai — a small town of about 2000 people 18 kilometers from Penza — the Legenda park has collected 275 different works created by 178 different artists from 59 countries. The collection of sculptures comprises what is almost certainly the largest park of its kind in Russia and one of the largest in the world.

The festival was first started in 2008 by Konstantin Volkov, a Penza businessman and owner of the Chistiye Prudy tourist base. Volkov freely admits that business motivated him to hold the festival, saying that: "You can't grow a business without marketing the territory," in an interview with the magazine SD. However, Volkov also hopes that the festival will create a new Penza, teaching Russian youth "to feel and understand art, and take pride in their homeland."

This rapidly multiplying wealth of artistic creations at the sculptural park has not failed to attract attention, despite its highly inconvenient location. The park is participating in the "Rossia 10" competition that lets voters choose their favorite cultural object in the country, and currently is in eight place with more than 500,000 votes out of a total of 44.5 million votes cast.

Novichkov expressed his surprise that the festival has achieved such success, saying that "we didn't expect anything like this from Penza" in an interview with RIA Novosti. Novichkov further stated he hoped that word spread about the festival and its base and that more foreigners would start to trickle in, "not as participants, but as tourists."

The 6th International Sculptural Symposium "Fall. Inspiration. Penza" is being held from Aug. 18 to Sept. 11 at the Chistiye Prudy hotel complex in Ramzai, Penza region.