WASHINGTON — It's the stuff of spy novels: The hunted-down protagonist wins in the end because he's got damaging documents squirreled away, a bargaining chip against the bureaucrats who want to silence him.

If National Security Agency leaker Edward Snowden thinks he's living in such a thriller, legal experts say he's got another thing coming. Nothing he has is likely to scare off American prosecutors.

Snowden, stuck at a Russian airport while he seeks asylum from several countries, has not overtly threatened the U.S. that he would release more damaging documents. But the journalist through whom he has been working, Glenn Greenwald, has said that blueprints that detail how the NSA operates would be made public if something should happen to Snowden.

Legal experts say whatever remaining documents the fugitive whistleblower has will be useless as a bargaining chip.

"This is his insurance policy," said Greenwald, a columnist with Britain's Guardian newspaper who received Snowden's initial leaks and who communicates with the former NSA systems analyst.

In a July 13 article in the Argentine newspaper La Nacion, Greenwald said, "The U.S. government should be on its knees praying every day that nothing happens to Snowden, because if something does happen, all the information would be revealed and this would be its worst nightmare."

Snowden leaked details of two top secret U.S. surveillance programs. He has been charged with three offenses, including espionage, and could face up to 30 years in prison if convicted. President Vladimir Putin has said that if Snowden releases any more of the materials, Russia will not grant him temporary asylum.

"If the Obama administration responds with an even harsher hand against me, they can be assured that they'll soon find themselves facing an equally harsh public response," Snowden said in a June 17 online question-and-answer forum.

"Snowden has information enough to cause more damage to the U.S. government in a single minute than any other person has ever had in the history of the United States," Greenwald said in the article in La Nacion. 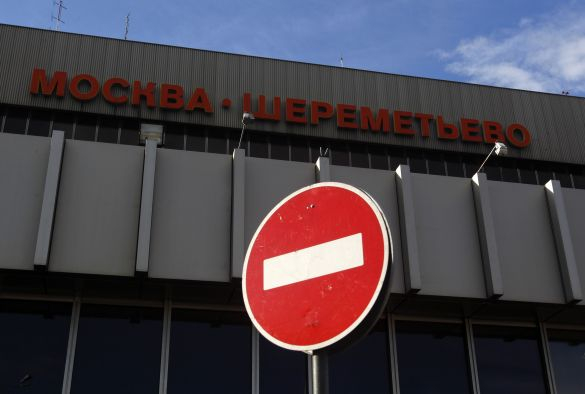 A traffic sign outside Sheremetyevo Airport, where Snowden remains.

The U.S. Justice Department is not discussing its prosecution strategy. But while the U.S. isn't eager for any more classified information to be disclosed, there's little chance Snowden will be able to use what he has as a bargaining chip to negotiate his prosecution or extradition. That's because giving into threats would risk opening the door for others to take similar action in the future.

The government must take the position: "We don't negotiate with extortionists," said Michael Chertoff, the former head of the Justice Department's criminal division and former secretary of homeland security. Chertoff said he could not recall a case in which the U.S. government had caved under this type of threat.

"I'm betting that there is virtually nothing that Snowden could do or threaten to persuade the [U.S. government] not to prosecute," said Peter Zeidenberg, a former federal prosecutor who was on the team that prosecuted I. Lewis "Scooter" Libby, the George W. Bush administration official who revealed the name of a CIA officer. Zeidenberg said doing so would send a damaging message from the U.S.: "If you are going to steal secrets, get the crown jewels; that way, the government will never dare to prosecute."

Mark Zaid, an attorney who has represented people charged with espionage, said these threats from Snowden and Greenwald are a form of graymail, a tactic in which defendants charged with spying try to force the government to drop the charges by threatening to expose U.S. secrets on the witness stand.

Zaid said every time Snowden releases more documents it could create additional criminal charges. Zaid is not working on Snowden's defense and hasn't been contacted by the leaker. But if he were representing Snowden, Zaid said, "I'd tell him to shut up" and accept a marriage proposal from Russian spy Anna Chapman. On July 3, the attractive redhead who was swept up with nine other sleeper agents and deported from the U.S. in 2010 tweeted, "Snowden, will you marry me?"

"The only thing really he's got now is either minimize the penalties going forward or work out some favorable resolution he's comfortable with somewhere in the world," Zaid said of Snowden.

And even then, it would be difficult for the U.S. government to negotiate, he said.

"Because it's not just about Snowden anymore," Zaid said. "It's about anyone who would follow in his footsteps."

Graymail is a common defense tactic, and three decades ago a law was passed to combat it. Attorneys say the law was meant to let judges sort out the classified information behind closed doors and determine what the defense genuinely needs to make public. If the judge concludes the defendant cannot get a fair trial without spilling secrets, the government can decide whether to go forward or drop the case.

But Snowden has yet to enter into court proceedings. The government is in the process of trying to extradite him to face the charges.

U.S. officials have said what Snowden already released will harm national security, though it's too early to tell what damage has been done. The U.S. intelligence community has a good idea of what other documents he has.

As Chertoff sees it, Snowden's message to the government is this: "If you do anything that Snowden doesn't like, he's going to try to hurt you by putting out information that could be damaging."

"To me, that's extortion," Chertoff said.

When Snowden arrived at Moscow's Sheremetyevo Airport on June 23, he was believed to be planning simply to transfer to a flight to Cuba and then to Venezuela to seek asylum. But the U. S. canceled his passport, stranding him. He hasn't been seen in public since, although he met with human rights activists and lawyers on July 12. He's applied for temporary asylum in Russia and has said he'd like to visit the countries that offered him permanent asylum — Venezuela, Bolivia and Nicaragua.