Dmitry Itskov gathered some of humanity's best brains — and a few robots — in New York City on Saturday to discuss how humans can get their minds to outlive their bodies. Itskov, who looks younger than his 32 years, has an aggressive timetable in which he'd like to see milestones toward that goal met:

- By 2020, robots we can control remotely with our brains.

- By 2025, a scenario familiar to watchers of sci-fi cartoon show "Futurama": the capability to transplant the brain into a life-support system, which could be a robot body. Essentially, a robot prosthesis that can replace an ailing, perhaps dying body.

- By 2035, the ability to move the mind into a computer, eliminating the need for the robot bodies to carry around wet, messy brains.

- By 2045, technology nirvana in the form of artificial brains controlling insubstantial, hologram bodies.

The testimony of the neuroscience experts invited to Itskov's Global Future 2045 conference at Lincoln Center in New York City indicate that Itskov's timetable is ambitious to the point of being unrealistic. But the gathering was a rare public airing of questions that will face us as technology progresses.

Is immortality desirable, and if so, what's the best way to get there? Do we leave behind something essentially human if we leave our bodies behind? If you send your robot copy to work, do you get paid?

Japanese robotics researcher Hiroshi Ishiguro's presentation started out with a life-size, like-like robot representation of himself on stage.

The robot moved its lips, nodded and moved it eyes while a hidden loudspeaker played up Ishiguro's voice. Apart from a stiff posture and a curious splay of the hands, the robot could be mistaken for a human, at least 10 rows from the stage. 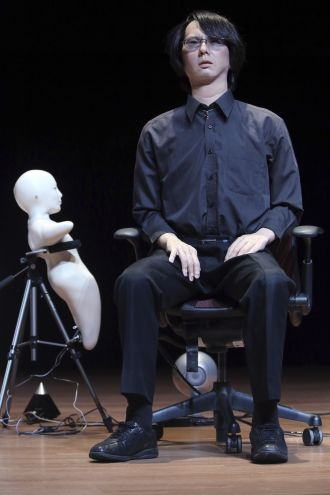 Ishiguro uses this android or "Geminoid," after the Latin word for "twin," to meet with students at a research institute two hours away from the laboratory where he also has an appointment. He controls it through the Internet and sees his students through a webcam.

"The problem is, if I use this android, the research institute says it cannot pay for me," Ishiguro said, to laughter from the audience of hundreds of journalists, academics, Buddhist monks and futurism enthusiasts.

Ishiguro flew to the U.S. with his robotic twin's head, the most valuable part, in the carry-on luggage. The body rode below, in the luggage compartment.

To Itskov, who made his money in the Russian Internet media business, the isolated achievements of inventors like Ishiguro are not enough. He wants to create a movement, involving governments and the United Nations, to work toward a common goal.

"We shouldn't just observe the wonderful entrepreneurs; we need to move ahead systematically," Itskov said in an interview. "We are really at the time when technology can affect human evolution. I want us to shape the future, bring it up for public discussion, and avoid any scenario that could damage humanity."

Itskov says he tries to eliminate his "selfishness" day by day and has spent about $3 million promoting his vision. He organized the first conference on the theme in Russia last year.

But in bringing the idea to the U.S., a cultural difference is apparent: Itskov's desire for a shared, guiding vision for humanity does not mesh well with the spirit of the American high-tech industry, which despises government involvement and prizes its freedom to pursue whatever projects it wants.

Space entrepreneur and X-Prize Chairman Peter Diamandis articulated that spirit at the conference; the freewheeling capitalist system, he said, is one of the strongest engines for effecting change.

"The rate of change is going so fast. I do not believe any of our existing government systems can handle it," he said.

Archbishop Lazar Puhalo of the Orthodox Church in America, who has a background in neurobiology and physics, offered another critique at the conference.

If it can be done, that's not necessarily a good thing either, the robed and bearded patriarch believes.

"I'm not too fond of the idea of immortality, because I think it will be deathly boring," he said, with a twinkle in his eyes. Giving up our bodies could also be problematic, he said.

"There's a lot of stuff in them that makes us human. I'm not sure they can be built into machines," Puhalo said.

Itskov acknowledges that his vision would leave part of the human experience behind. But he believes it would be worth it.

YEREVAN, Armenia — Igor landed at Yerevan’s Zvartnots airport from Moscow on Tuesday, looking bewildered after his knee-jerk decision to flee...