A tornado caused a scare outside Moscow when it passed over the decommissioned site of the world's first civilian nuclear power plant.

No injuries or major damage was reported after the storm Thursday evening in the Kaluga region town of Obninsk, 110 kilometers southwest of Moscow.

But eyewitnesses spoke of the fright that they experienced when they saw the ominous dark funnel form around 7 p.m. as the temperature dropped sharply amid a heavy rain.

"It rose from the ground, and bags of trash and two balloons swirled around in the funnel," resident Konstantin Kuznetsov told NTV television. "A column of birds could be seen struggling to fly away from it."

Another resident captured harrowing footage of the long, thin tornado slowly twisting its way through the Obninsk Nuclear Power Station, a single-reactor facility that opened in 1954 and was shuttered in 2002. The resident, Anton Lunev, said in a YouTube post that he recorded the video on his photo camera.

Some residents took a sardonic approach to the bad weather. "We have a tornado over the nuclear power station," wrote @badboyobninsk on Twitter. "It's not bad. :) At least no one died."

The nuclear plant now operates as a museum. 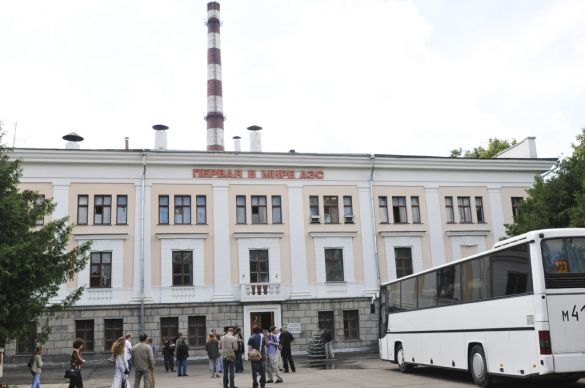 People visiting the museum at the Obninsk Nuclear Power Station in 2009. The sign on the building says, "The first nuclear power plant in the world." (RIA Novosti archive, image #409173 / Pavel Bykov / CC-BY-SA 3.0)

Another Twitter user expressed disbelief after spotting the tornado while driving from Moscow to the Tula region town of Suvorov.

"I saw a tornado like one in the American movies! It was huge!" @_pudel wrote.

Central Russia is caught in the middle of the spring rain season. Also on Thursday, the Tula governor declared a state of emergency after a windstorm a day earlier injured 20 people in the town of Yefremov, 300 kilometers south of Moscow.

The winds damaged 179 residential dwellings, five schools, two kindergartens and a number of businesses, and left more than 200 buildings without gas and power, the Emergency Situations Ministry said.