Contribute Today
By Alexander Bratersky
May 23, 2013

President Vladimir Putin, who was expected during a meeting with more than a hundred entrepreneurs on Thursday to give a nod to the State Duma to draft an amnesty act freeing thousands of imprisoned business people, said the concept needed more work, Russian television reported Thursday.

Putin said at the meeting in Voronezh — an industrial city south of Moscow — that Titov's proposal was still "rough," and should be discussed with the General Prosecutor's office and experts, "then conclusions should be made and a well-balanced decision reached."

Business ombudsman Boris Titov, who presented his proposal during the meeting, said in televised remarks that businesspeople can barely function in Russia because of "the number of obstacles that are put in their way."

Titov, a liberal-leaning former politician who has advocated such an amnesty for a long time, said earlier that 13,000 people could be freed by such a move.

The amnesty might also cover 100,000 more who received suspended sentences or huge fines or have spent lengthy terms in pretrial detention, having been accused of various economic crimes.

In many cases, investigators insist on keeping them locked up prior to trial as a form of pressure, despite legal safeguards that proscribe this, experts said.

Titov recently highlighted one of the most appalling cases in which businessman Iosif Katsyv, who was arrested in 2008, has spent five years in the pretrial detention.

The Rostov-on-Don businessman is suspected of defrauding Raffeisen Bank of about 1.3 billion rubles ($42 million) through a scheme involving illegal loans and money laundering. Katsyv denies the charges but is still in detention awaiting a trial after a local judge prolonged his arrest. 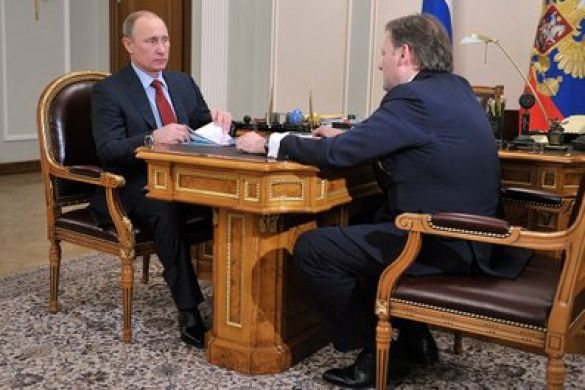 Putin meets Titov at the Kremlin in March. (kremlin.ru)

Like the majority of business people who have run afoul of the law and are on trial or serving their sentence in prison colony, Katsyv is accused under article 159 article of the Russian criminal code, which refers to "swindling."

"This article is easy for investigators to work with, since many of its passages are rather murky," trial lawyer Eduard Sukharev said.

Titov has said that economic crimes should be punished by fines, not a jail term.

Yana Yakovleva, head of Business Solidarnost, a group that helps wrongly accused entrepreneurs, said a majority of cases under article 159 were "fabricated" by rivals in order to steal business.

She said, however, that an amnesty should have "clear definitions" for law enforcement officials to act upon. "It should really define who are entrepreneurs and who are not, otherwise the whole system will be left in chaos," said Yakovleva, who herself spent several months in pretrial detention, having been suspected of selling chemical products containing narcotic elements without a license. She was fully acquitted in 2008.

Liberal-leaning United Russia party deputy Viktor Zubarev said he supports full-scale amnesty for businessmen. "Even if some criminals will also get off, it would be a small percentage. I don't buy the idea of arresting the whole crowd to catch two spies," he said.

Law enforcement officials started to use article 159 against businessmen more extensively after other laws punishing economic crimes were softened during Dmitry Medvedev's presidency in 2010.

One such amendment said those who are accused in economic crimes should not be put in detention prior to a court hearing. The changes led to a 20 percent decrease of suspects being placed in pretrial detention, according to figures released by Justice Minister Alexander Konovalov in 2010.

The same amendments helped to cut the jail sentence of Yukos founder Mikhail Khodorkovsky and his business partner Platon Lebedev from 13 to 11 years.

Experts said it was unclear if the amnesty would cover Khodorkovsky and Lebedev. Both are set to be freed by summer 2014.