Tens of thousands of people marched in central Moscow on Wednesday at a May Day rally billed as a show of support for President Vladimir Putin. But the turnout amounted to about half the number who showed up for a similar event last year.

About 90,000 people participated in the march down Tverskaya Ulitsa organized by two pro-Putin organizations, the United Russia party and the All-Russia People's Front, the police said in a statement. Police initially put the figure at 70,000 but later revised it upward.

In contrast, the march staged last May 1 attracted 150,000 people, according to police, and gave Putin a tangible boost in support as he faced growing protests ahead of his inauguration to a third term as president six days later.

‘Our workplace situation is unique, with unemployment of 0.4 percent.’
Sergei Sobyanin
Moscow Mayor

Wednesday's march also was supposed to have served as a demonstration of Putin's power, RIA-Novosti reported.

Despite the lower numbers, Andrei Bocharov, a senior official with the People's Front, remained enthusiastic about the turnout.

"There are many of us and we are all different, but we are as one," Bocharov said, according to Itar-Tass. "We must work together to fulfill the president's orders."

Marchers held banners with slogans such as "Moscow is the business capital of Russia," "Down with the slavery of loans" and "Decent wages are the foundation of progress."

Putin and Prime Minister Dmitry Medvedev, who mingled with demonstrators at last year's event, did not join senior United Russia officials at the march Wednesday.

Moscow Mayor Sergei Sobyanin was among the most senior government officials in the crowd, although he did not lead the march and hung back with a group of teachers and students. 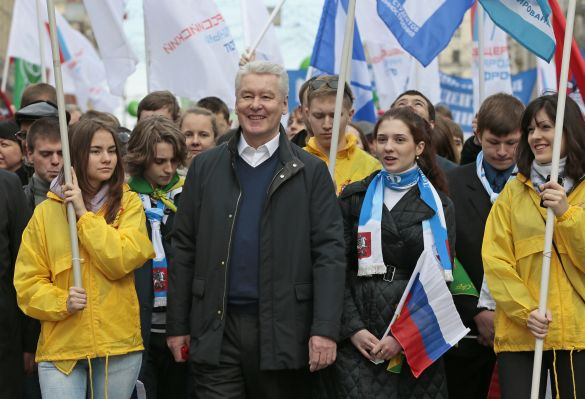 Mayor Sergei Sobyanin walking with a group of teachers and students at a May Day march down Tverskaya Ulitsa. (Mikhail Metzel / AP)

Sobyanin stressed the importance of welcoming non-Muscovite students to the city, saying they tended to stay and enrich Moscow with their talent. He also hailed the city's low unemployment rate.

"Our workplace situation is unique with an unemployment rate of only 0.4 percent," he said, according to news reports. "No other city in the world probably has a similar level."

A total of 2 million people were expected to participate in May Day rallies around the country during the public holiday, officially known as Spring and Labor Day, according to the Federation of Independent Trade Unions of Russia.

In Moscow, 14 other rallies were being staged Wednesday, City Hall said.

Communist leader Gennady Zyuganov led around 5,000 supporters on a march from Kaluzhskaya Ploshchad. People carried banners praising Lenin, Stalin and Marx and with slogans like "Hands off the glorious history of the Soviet Union!" and "Our goal is updated socialism." 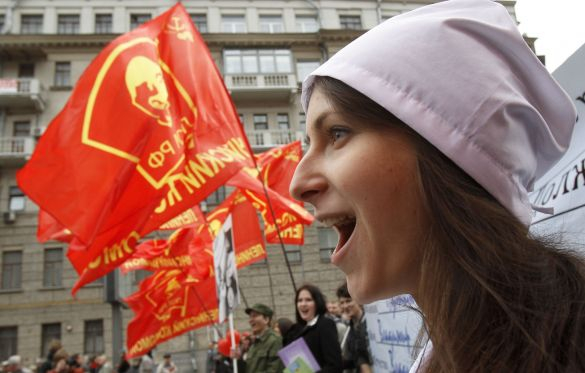 A Communist Party supporter shouting a slogan during a May Day march. (Sergei Karpukhin / Reuters)

The Liberal Democratic Party saw a similar turnout for their march from Pushkin Square toward the Kremlin.

About 300 people joined a rally by the Left Front opposition group, while 1,000 nationalists marched in support of the “Russia for Russians” platform, according to police figures. The nationalists estimated that 2,000 gathered.

More than 10,000 police officers and other law enforcement officials were deployed across the city to maintain order.

Local disturbances were minor. Police detained 15 people around 12:20 p.m. at the Tushinskaya metro station for “disrupting public order,” police said in a statement. Three were released quickly, while the others were taken to the police station to face possible charges.