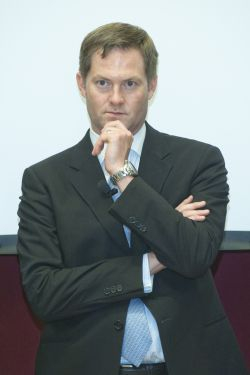 Russia is one of the key markets for our company, and it is No. 3 after the United States and Germany. It’s a very strategic and important growth market for us.

Now we can observe a new demographic situation: a growing global population, a growing proportion of elderly people, an increasing trend toward chronic “lifestyle” diseases, continuing advances in medical technology (which also drives costs up) and ongoing growth of emerging economies. Under these conditions, one of the most important parts of investments will be in pharmaceuticals and the development of a new generation of drugs.

The Russian government considers that the new control over drug prices can help drugs become more affordable to patients according to the Pharma 2020 plan. Our company has the capability to be the main provider of high-quality generic medicines to support the Russian health care system. We have one of the broadest offerings in the industry and a lot of development projects in our pipeline, many of which involve biotechnology. We also have industry-leading capabilities in new and differentiated generic products: biosimilars, injectables and respiratory products.

The health care industry will continue to grow: The long-term growth drivers remain unchanged, and generic penetration, particularly in emerging markets, is a fact waiting to happen.

Industry consolidation looks set to continue. Growth requires funding — in the wake of the crisis, there is much less of this around. Also, pricing pressure has led to a steady decline in industry profitability, at the same time as the need to invest in new capacities continues to grow. Finally, branded pharma companies are increasingly realizing that generics are a growth industry — and following the Novartis lead by investing in the future.

Biosimilars will come of age: Biologics are the medicines of the future, offering increasing therapeutic hope for chronic diseases such as cancer and autoimmune disorders. However, their complexity combines with growing demand to drive health care budgets ever higher. We would like to bring our biosimilars as soon as possible to Russia. We have seen a lot of collaboration with governments worldwide. We brought significant cost savings to them. In fact, recently in Britain, NICE — or the National Institute for Clinical Excellence, a body established in 1999 to provide authoritative guidance on current best practice in medicine and to promote high-quality, cost-effective medical treatment in the NHS — announced a recommendation for somatropin, actually for Omnitrope, the brand of our human growth hormone. And they said, “Look, it’s similar quality, similar safety [and] similar efficiency.” This is where we come in. We can provide a similar quality product at a cost of 30 percent to 40 percent less in many cases.

Last year we were continuing to increase our commercial effectiveness by adapting to changes on the market and focusing on sales. We are reinforcing our solid market positions because of the expansion of therapeutic lines. Linex, Amoksiklav, Broncho-Munal and some other brands demonstrated solid growth in 2009, especially compared with the general growth of the Russian pharmaceutical market. Released in 2009, Amoksiklav Quiktab, a new soluble form, was among the top 2009 launches, according to IMS data. This year we also have several new products, like, for example, Biol (a completely new product for us), Rispolux and Forosa. Linex now is in the top-five OTC products in Russia, also according to IMS. Persen has been voted by Russian consumers as Brand No. 1 in its category.

I can single out three strategic objectives that we see as the keys to success in today’s rapidly growing but fiercely competitive global generics market: to build on our current position as a leading global generics company by consistently being “first to market” with a broad, worldwide product portfolio; to build and maintain a cost-competitive business that allows us to be the “last to exit” our chosen markets worldwide; and to exploit our superior expertise in “differentiated” generics, particularly our pioneer role in the field of follow-on biopharmaceuticals — biosimilars.