“To offer pleasure to the eye, a city should be made up of a variety of formal shapes. It may be a site where various styles come together.”

Although Nikolai Gogol wrote those words in 1831 to describe an imaginary street, they also describe the spirit of Cosmoscow’s 2021 edition.

Cosmoscow was begun in 2010 as a way of bringing a broad spectrum of Russian contemporary art to viewers and, more importantly, buyers.

This year it was immediately clear that viewers, buyers or not, were delighted by the eclecticism of the artists presented by the 82 galleries. They could be seen buzzing around booths, or looking to add to their Instagram feed, or in some cases, to fill their living rooms with some good and cutting-edge contemporary art.

In this version of Cosmoscow, the profile of the collector is someone aged 40-45 — possibly from Saint Petersburg. The smiles on the unmasked gallerists’ faces are wide after sticking multiple red dots under the artworks — the international signal that the work on display has been purchased. Many gallerists said that sales were up compared to past editions. 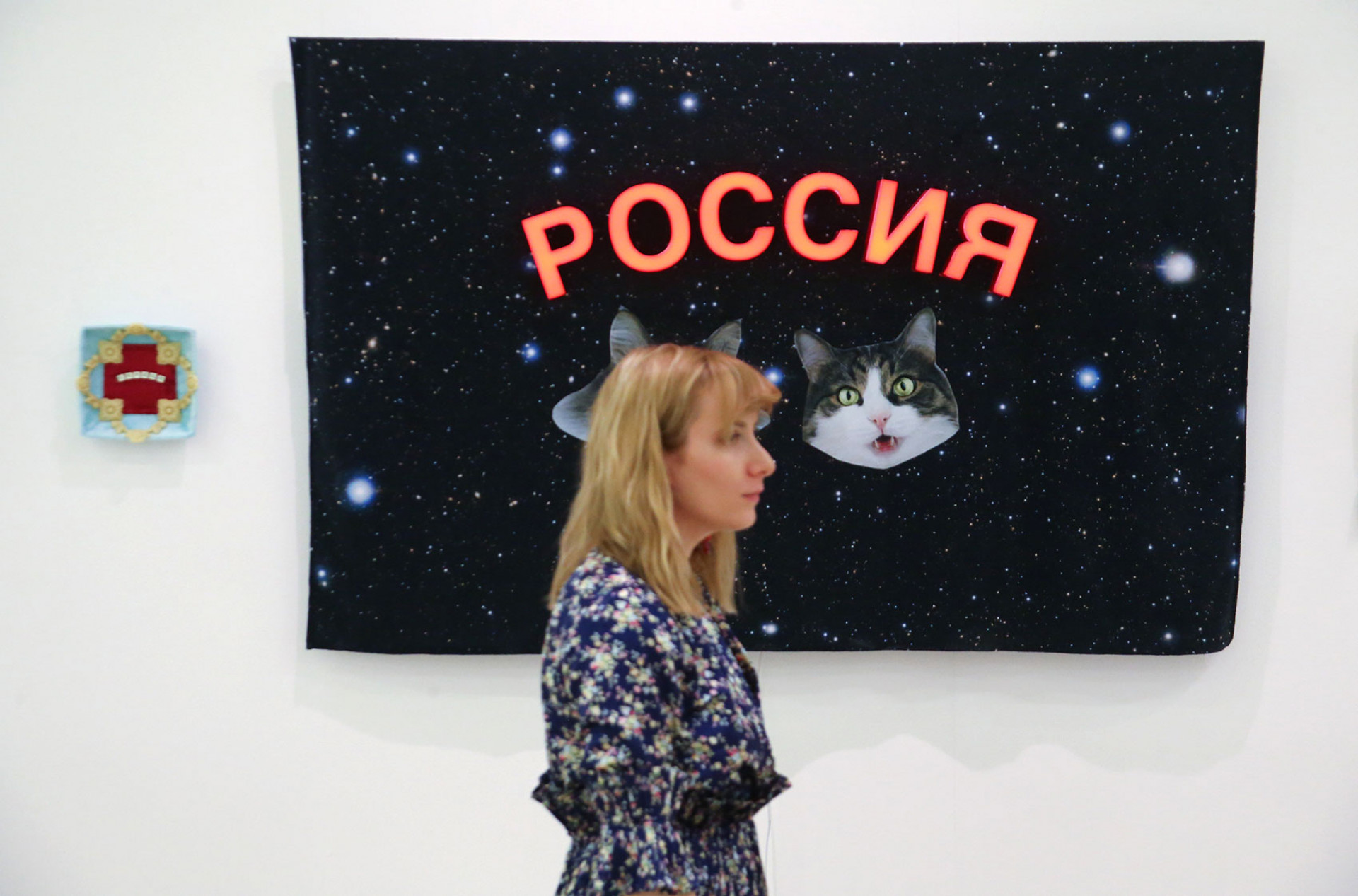 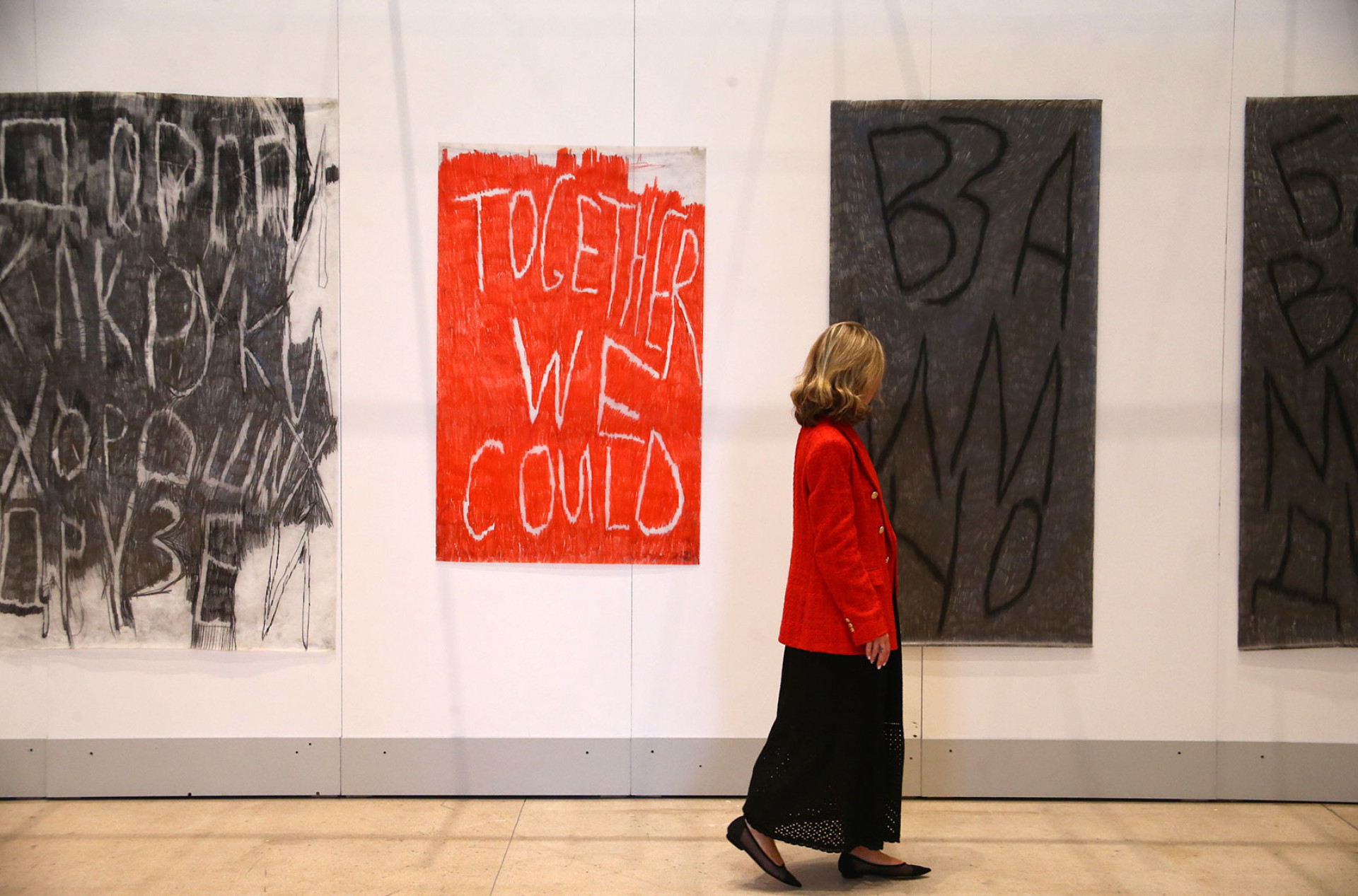 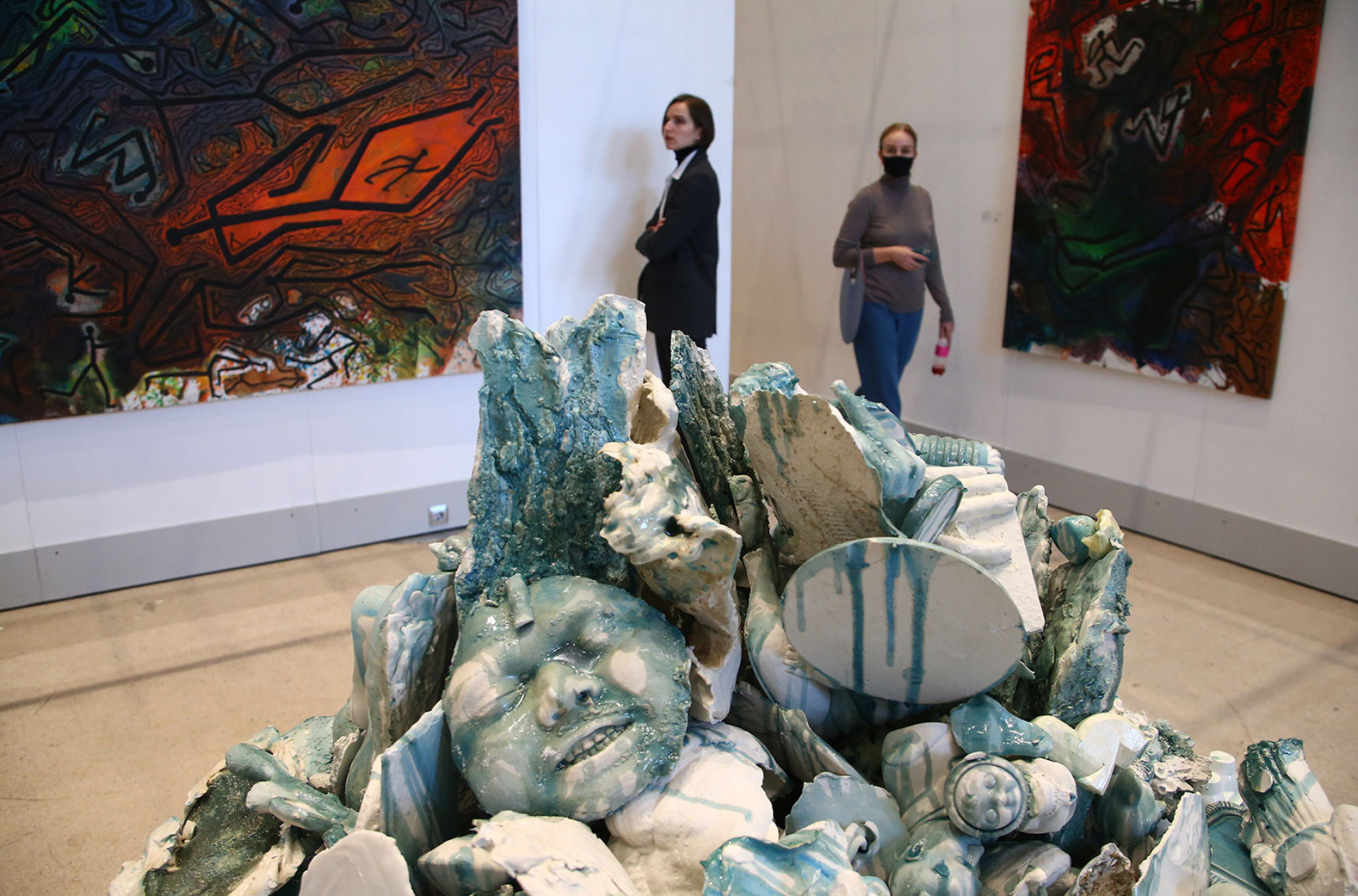 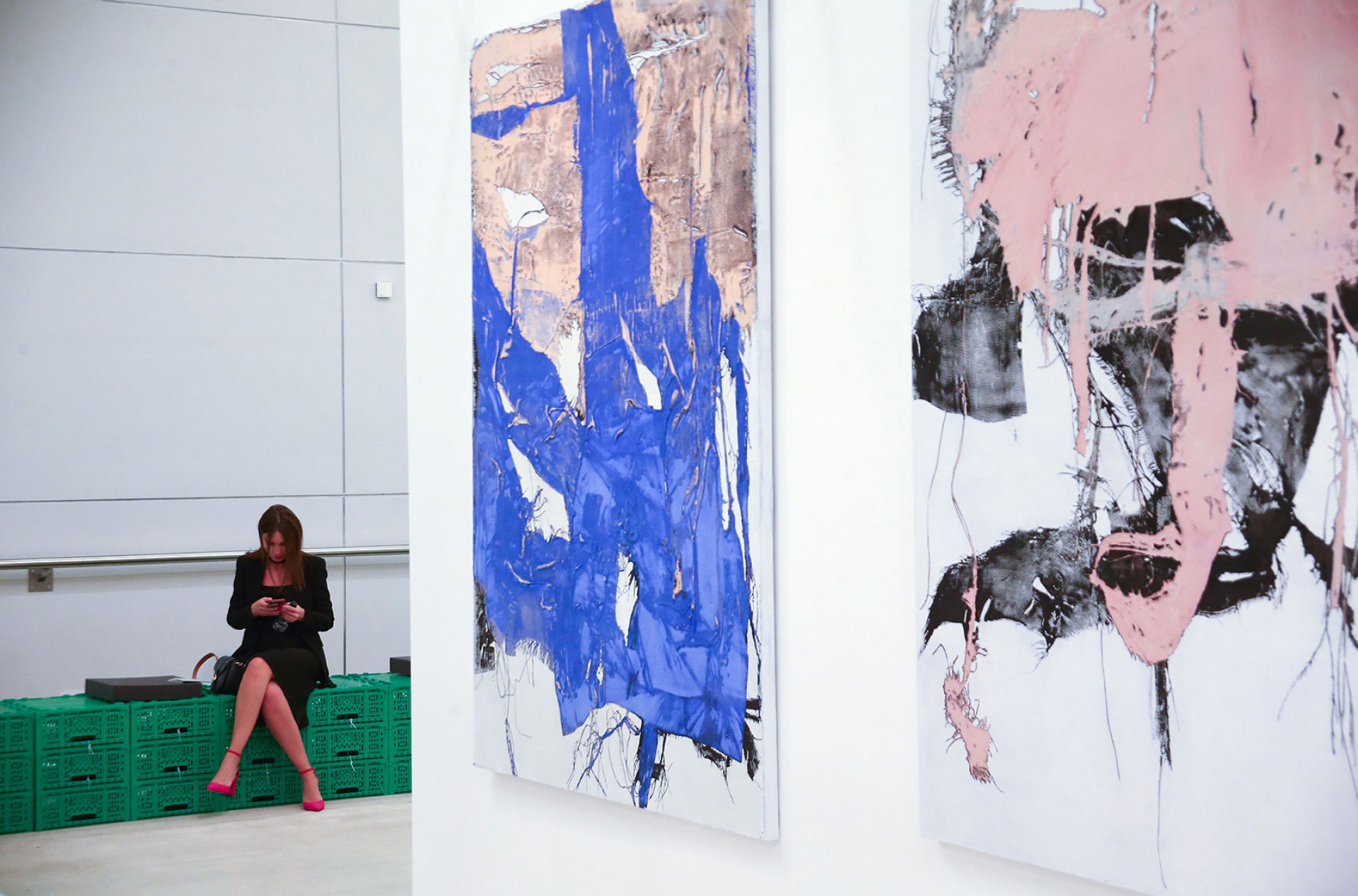 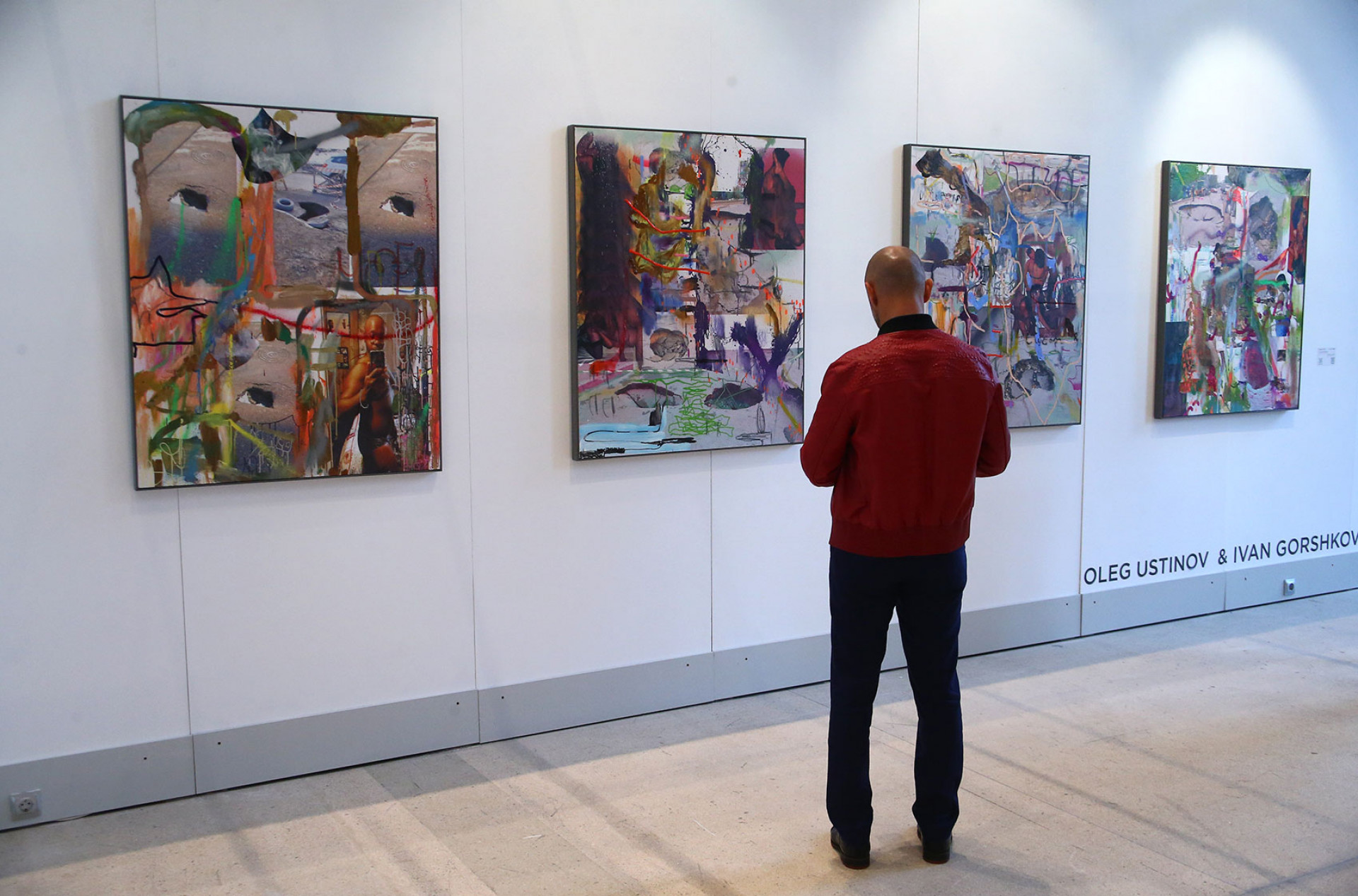 The highest-selling artists are the fair were Andrey Kuzkin, Olga Tobreluts, Irina Razumovskaya, Evgeny Granilshchikov, Olga & Oleg Tatarintsev, the surrealistic paintings of Alejandro Pasquale as well as the three-dimensional architectures of Pavel Pletnev. But that was just on-site sales. Post-fair sales bring in most of the income: Once the art fair closes, the interested collectors visit their galleries of choice for more intimate and prolonged discussions.

But the fair is the starting point. Every year the Cosmoscow Foundation chooses an “artist of the year” and provided him or her with funds to realize a project. This year it was Irina Korina, whose installation called “Razzle-Dazzle” welcomed visitors to the Manege Exhibition Hall.

Spectators were drawn to the snowy landscapes of Konstantin Batynkov, the strange outdoor miracles of Igor Elukov’s photographs, or the unsettling office buildings by Olga Chernysheva.  They also hovered around Natalia Gudovich’s AR Danae, a celebration of the post-modern canon and our addiction to technology; the ingenious and penetrating images created by Rinat Voligamsi; and the Art Agency gallery booth with the suggestive “Burning News” project by Tim Parchikov.

If you’re an ailurophile (a great lover of cats), your artist is Alina Glazoun, and if you have a penchant for street art, Vladimir Abikh is the one. If none of these options suit, you could always take refuge in “Created in Moscow,” a collaborative space were 23 selected galleries showed one sculpture. This endeavor reaffirms the main mission of the fair: to protect and promote local creation and establish links with potential buyers. The results are proving them right.

Misha Gudwin’s hipster-vandalized street furniture was the most political intervention that you could see at the art fair. The least visited part of the fair seems to have been the couple of meters of wall-space set aside for the “new kid in town”: NFTs — non fungible tokens, i.e. digital images. Despite being treated as pieces of video art — or perhaps because of it — they were considered to be nothing new.

At the very top of the Nikolay Evdokimov Gallery, a transposition of his apartment/gallery in Saint Petersburg — the furniture in his booth comes from his own living room — is the series “Ultimum astrum” by Dmitry Sirotkin. In honor of the 60th anniversary of Yuri Gagarin’s launch in the Vostok-1, he shows photographs of the ceilings of abandoned urban centers painted with an ash trail simulating a star in a gray sky.

This symbolic vision enters a graceful dialog with another tenant of the gallery: Andrei Pomulev’s acrylic classical figures under shiny constellations. Together, these works created a cosmos that seems to fit perfectly in a fair titled Cosmoscow. And they showed us another good example of the current state of Russian art — on the right track for eyes that accept a mixture of aesthetics.

What's On in Moscow This Weekend

A hot weekend in Moscow of classic Russian rock, Afisha picnic plus pre- and post-parties, cutting edge art and all things Japanese. Join in!
Contemporary art

The solo exhibition of works by Vadim Kosmatschof at the New Tretyakov Gallery will change your understanding of sculpture if you let it.
Contemporary art

Once an abandoned Soviet building transformed, Garage celebrates its tenth anniversary this year as the hub of Russia's contemporary art scene.
Contemporary art

Zvyagintsev’s drama was also nominated for the Golden Globe Award earlier this month.