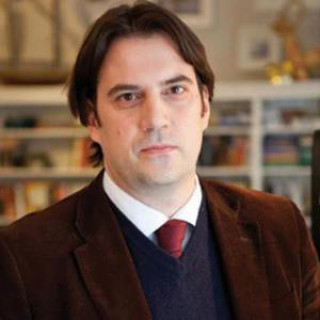 The U.S. State Department might be going through rough times but in some corners of the globe it still makes a splash. Deputy Assistant Secretary Hoyt Brian Yee, Washington’s man in the Balkans, proves the point.

In May, his last-ditch intervention brought an end to a festering crisis in Macedonia with a new, pro-Western cabinet taking the reins. Now, Yee has set his sights on Serbia, Russia’s best friend in the region.

During a recent visit to Belgrade, on Oct. 24, he aired a blunt message for his hosts: “You cannot sit on two chairs, especially if they are so far apart,” hinting at Serbia’s pursuit of EU membership while cooperating with Moscow.

The Serbian cabinet offered a mixed reaction: Some, like the EU affairs minister, played down the statement, others—including Foreign Minister Ivica Dačić and Defense Minister Aleksandar Vulin—blasted back at the U.S. envoy.

Russian Ambassador Alexander Chepurin joined the chorus, dismissing Yee as “the 75th deputy of the 24th assistant to a deputy to the foreign minister.” Even so, the American diplomat was received by Aleksandar Vučić, Serbia’s omnipotent president, and the two reportedly had a heated exchange.

The main bone of contention seems to be the Russian-Serbian Humanitarian Center, a body tasked with handling natural disasters.

Opened in 2012 by Sergei Shoigu, while he still headed Russia’s Emergency Situations Ministry, the center is viewed by many in the West as a Russian intelligence outpost. Its location in the southeastern Serbian town of Nish, not far from the borders with Kosovo, Macedonia and NATO and EU member Bulgaria, also raises eyebrows.Back in October 2014, Moscow demanded that its staff seconded to the unit, as well as the premises itself, be given diplomatic protections. The Serbian government, however, has been dragging its feet.

According to Russian Foreign Minister Sergei Lavrov, several EU governments have demanded the center’s closure. Now it appears that the story is coming to a head.

Ministers Dačić (who succeeded Slobodan Milošević as leader of the Serbian Socialists) and Vulin are doing Russia’s bidding. The U.S. stepped into the fray in August when Sen. Ron Johnson, chair of the Subcommittee on European and Regional Security Cooperation, came out against the controversial facility, saying that it would hurt Serbia’s own interests.

The truth, however, is that U.S. pressure is unlikely to put an end to Serbia’s balancing act, reminiscent of Josip Broz Tito’s equipoise between East and West.

In addition to the Nish center, Belgrade and Moscow profit from a military technical agreement dating back to 2013.

In October, Serbia received the first two MiG-29 fighter jets out of a batch of six donated by Russia. Pro-government media praised the deal as a way to even the playing field with neighboring Croatia, a NATO member since 2009.

Zagreb is acquiring new weapons systems and working to modernize its air force by phasing out Soviet-made jets inherited from former Yugoslavia. Word on the street is that President Vučić will be discussing the purchase of S-300 surface-to-air missiles and additional MiGs during his forthcoming visit to Belarus.

The U.S. has limited leverage over Serbia because the Balkans has long ceased to be a top priority for Washington. It is very rare that senior officials focus on or spend time in the region.

Vice President Mike Pence’s trip to Montenegro in June, to celebrate the country’s accession to NATO, is the exception that proves the rule.

What the world could not fail but see was U.S. President Donald Trump pushing aside Montenegrin Prime Minister Duško Marković during a NATO gathering in Brussels last May.

The EU certainly holds more cards as Serbia is aspiring to join and has been conducting accession talks for three years now. Yet European leaders prefer engaging rather than playing hardball with Belgrade in order to shore up stability in ex-Yugoslavia, particularly Kosovo and Bosnia. Stonewalling the Serbs over their flirtation with Russia is a non-starter.

That is not to suggest that Serbia is now firmly in the Russian orbit. Under the radar, it has built a robust security relationship with the U.S. and NATO.

Officials in Belgrade point out that in 2016 the Serbian armed forces conducted 200 joint activities with the alliance  (and they continue to conduct them) as opposed to just 17 with the Russians and other members of the Collective Security Treaty Organization (CSTO), in which Serbia is an observer.

A Status of Forces Agreement, or SOFA, gives NATO personnel privileges denied to the Russian staff in Nish. Since he became the prime minister in 2014, Vučić has cultivated an image of a hard-nosed economic reformer who is fully at ease with Western dignitaries such as former Vice President Joe Biden or German Chancellor Angela Merkel.

Another wrong conclusion from Yee’s mission to Belgrade would be that the West and Russia are locked in a life-and-death conflict over the future of the Balkans. The regional frictions between the two are more about Moscow fighting a low-cost rearguard campaign aimed at disrupting EU and U.S. policies.

Sure, Russia has ramped up its rhetoric against NATO and even EU expansion, and has seemingly scored some points in that standoff. Moscow’s security services were allegedly implicated in a coup attempt in Montenegro in October 2016 with the goal of preventing the country’s accession to NATO.

Across former Yugoslavia and beyond, nationalists idolize Vladimir Putin as the strong leader who is repaying the arrogant West for its past sins.

Governments court Russia for trade and investment opportunities, refusing to side with the Western sanctions. Even Croatian President Kolinda Grabar-Kitarović— who served as assistant secretary general at NATO in 2011-2014 and more recently castigated Moscow’s “hybrid warfare”— made an unprecedented three-day visit to Russia and met Vladimir Putin in Sochi.

Still, the fact of the matter is that Russia lacks a long-term strategy or ambitions in the Balkans. Neither the Eurasian Economic Union nor the CSTO will replace the EU and NATO. Moscow is emphatically uneager to bankroll countries outside the “privileged sphere of interest” it claims in the former Soviet Union.

Last but not least, there is no grand narrative undergirding Russian policy, a job once done by communist ideology. The Western Balkans are just a vulnerable periphery of the West where Russia can exert influence as part of a broader contest with the U.S and the EU.

That leaves plenty of wiggle room for local powerbrokers who profit from their connections to Russia just as much as Russia profits from them.

Over the long term, Yee might prove right about the impossibility of sitting on two chairs. But in the short term the likes of Vučić seem to be doing just fine.

Dimitar Bechev is a research fellow at the Center for Slavic, Eurasian and East European Studies at the University of North Carolina and a nonresident senior fellow at the Atlantic Council. He is the author of a new book called "Rival Power: Russia in Southeast Europe " about the political dynamics between Russia and key countries in the Balkans, as well as Greece and Turkey.