We make our way down a narrow alleyway. A four-digit code opens the heavy green door of the complex, but once inside, bolt cutters are the keys of choice. We pass several forced gates, scale a fragile wooden ladder, traverse backwards through a small hole, and exit onto the rooftop. From there, the imposing and bustling metropolis of Moscow opens up below.

Leading the urban mission is Kirill Vselensky, 23, a prominent member of the city's death-defying "roofer" community. Operating in a legal gray area and without safety equipment, roofers like Vselensky have developed a cult following in Russia, and have inspired similar movements across the world. Footage of their feats has attracted millions of web views, and some even struck sponsorship deals with multinational companies.

Defiance of authority and the rule of law is in the roofers' blood. To a significant degree, it is part of their appeal. But while the movement was at one point allowed to operate freely, a brush with politics last year led to unwanted attention from authorities. Surveillance, arrests and prison sentences followed; Vselensky was among the most high-profile of casualties.

In the days leading up to his arrest in August 2014, Vselensky had hosted Pavlo Ushivets, a Ukrainian roofer friend better known as "Mustang Wanted." Mustang is perhaps the biggest name in the urban explorer community across all of Eastern Europe, renowned for gravity-defying acrobatic antics on bridges, towers and moving trains. But in those scorching summer days, which coincided with the hottest phase of the war in eastern Ukraine, it was Mustang's nationality and roll call of Ukrainian nationalistic stunts that brought him the most attention in Russia. 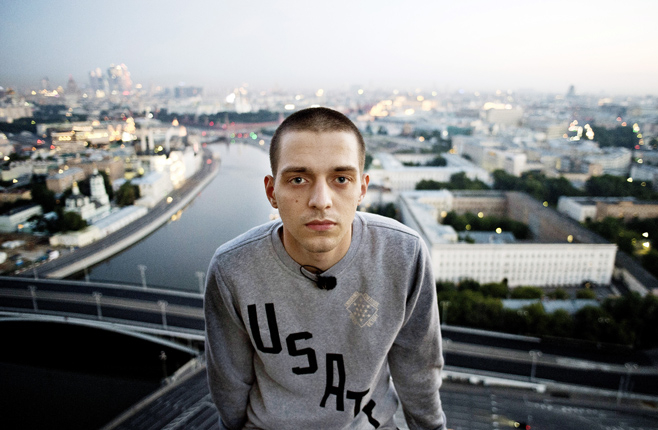 As the roofers' audience grows, many impressed viewers are keen to get involved. Many roofers make money by arranging romantic rooftop dates for couples.

It is unclear what role Vselensky played in Mustang's most famous stunt, in which the roofer led a group up one of Moscow's Seven Sisters skyscrapers and repainted its Soviet star in the Ukrainian colors of blue and yellow. Vselensky denies taking part. "I told him it was a bad idea and that it would be stupid to do something like that in Russia at that time. I advised him but he didn't listen," he says. But his association with the Ukrainian did him no favors, and after a raid by the Federal Security Service (FSB) on his home, Vselensky was sentenced to two years imprisonment.

One year and seven months later, Vselensky walks a free man. The word freedom, indeed, is emblazoned in bold lettering across the front and back of the T-shirt he is wearing. But he looks quite different from the social media photos of his younger self. His brown hair now contains the occasional shock of gray. His tired eyes are puffy, sunken.

Vselensky, too, has returned to a different Russia. Following the general crackdown on his roofer subculture, it is also now much more difficult to make a living. Before, he could get money from marketing stunts and his photo agency, Off-Limits. Nike and Chupa Chups had even written him checks. Today, such sponsorship is impossible to find. "People understand our hobby is illegal and is being targeted, so they stay away," Vselensky said. However, he has plans to resurrect his social media profile, which, despite laying dormant for nearly two years, still boasts hundreds of thousands of followers. 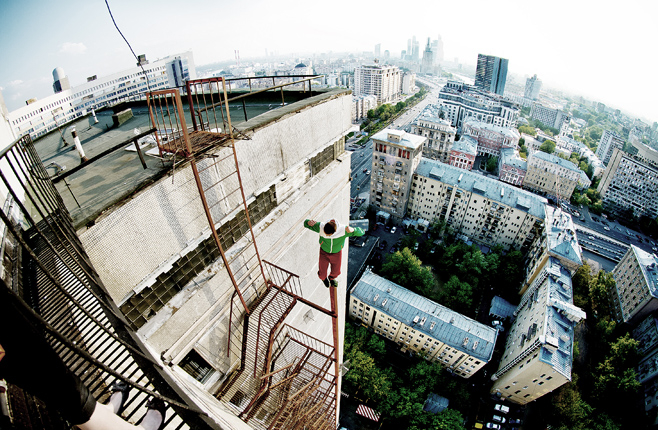 "I get so many messages from people asking me to take them roofing," Kirill Vselensky says.

Vselensky says that the roofing movement had already begun to change even before his arrest. "We had a closed group and you had to be invited, but later, more and more people became interested in what we were doing, especially after journalists started to write about us."

There are now marked differences within the sub-culture in Russia. The original roofers — the "Old School" — are the romantics of the movement. They are the photographers and the artists, choosing buildings based on aesthetic values alone. "For us, it's all about a connection with the urban landscape," Vselensky says. The newer roofers have less poetic ambitions, and are more concerned with racking up as many climbs as possible, and the taller the better.

Increased attention from authorities also means that gaining access to the urban jungle has become more complicated. Police now regularly monitor CCTV, are more ready to hand out fines, and guards have become more thorough with their patrols. As the crackdown spread, posts emerged showing roofers battered and bloodied following heavy-handed treatment by security officers. Now specifically targeted by the law, roofers often find themselves facing a night in a prison cell before being given a simple fine. 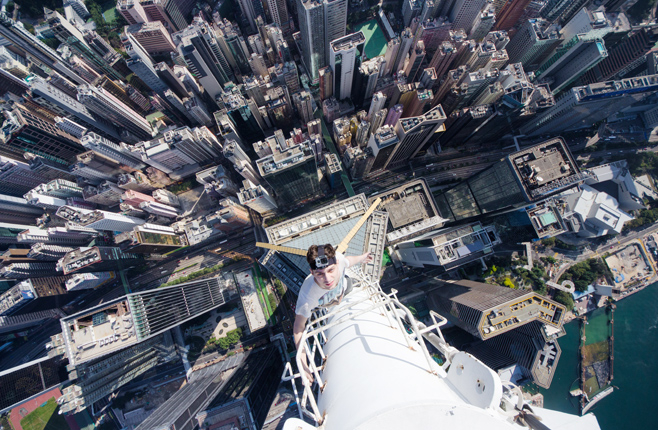 Kirill Vselensky says that new roofers don't need special equipment — only a smartphone and a sense of daring to join. Photo taken at 374 meters above Central Plaza in Hong Kong.

Ivan Kuznetsov, an elite roofer who has scaled six of the city's iconic Seven Sisters, says the new attention is not only down to politics. "I think the main reason is due to children seeing our photos taken at a great height, trying to recreate them and falling," he said.

Despite the disclaimers that usually precede YouTube roofer videos, Russia has witnessed several incidents of inexperienced amateurs trying, and failing, to recreate stunts. In 2014, Russian transport police released a gruesome video showing a 14-year-old boy balancing atop a railway bridge. As he loses his footing, the boy instinctively grabs hold of a 30,000-volt electricity cable before being knocked unconscious and falling 30 meters to his death.

Over the next two years, roofing claimed the lives of two more victims. In 2014, a schoolgirl fell from a roof in Moscow's suburbs. A year later, a young woman fell from a bridge while taking a "selfie" photograph in the Moscow City financial district. 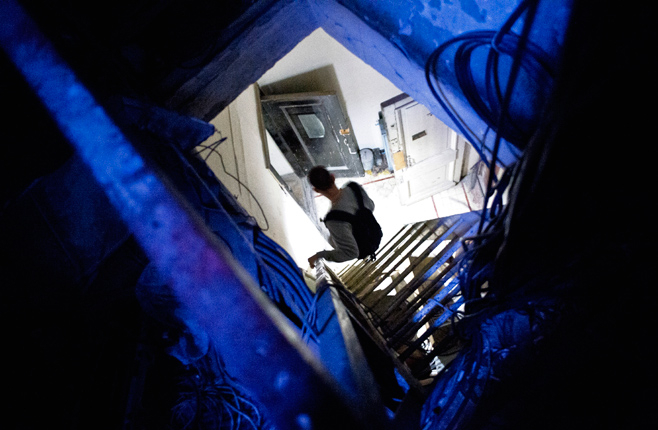 The second reason for the increased attention was, undoubtedly, politics. "It's obvious, our government doesn't want a repeat of what happened when Mustang painted the star," Kuznetsov said. As the other roofers, Kuznetsov was noncommittal when it came to the question of whether Russian roofing was at all political in essence.

On his part, Vselensky says Mustang Wanted has since apologized for implicating him in the Stalin Sister stunt. He claims not to be especially angry, but has resolved to avoid politics. "Politics are dangerous — that's my main lesson from prison," he said. "I just regret the loss of such a long part of my life."

Despite the obvious troubles, Vselensky maintains that the fallout from the Mustang affair was not particularly significant. He told The Moscow Times that roofing was simply enduring a "complicated" stage.

Other members of the movement, however, are not so sure, and blame Mustang Wanted personally for ending a golden period for the movement. "After the incident, many roofers stopped climbing as the laws became far stricter," Kuznetsov said. "It's fair to say many Russian roofers really don't like Mustang. They can see how the police started to pay attention. He changed everything."

Roofer Activist Changes His Name to 'Glory to Ukraine'

A Ukrainian roofer who painted a Soviet star on top of a Moscow landmark in his country's blue and yellow colors said he has officially changed his...
Private warning