Japanese eatery Cutfish offers sushi (from 320 rubles), various soups and a range of grill options (from 490 rubles). The beautifully crafted tuna and salmon rolls are addictive, but leave room for the grilled duck breast. The open kitchen and oriental dragon murals create a lively atmosphere for diners. Everything is high quality, but note that portions are on the smaller and pricier side. 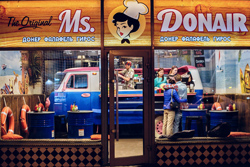 Shwarma in the center

Ms. Donair now has two locations in Moscow. Unsurprisingly, both are located in areas with buzzing nightlife. The 24/7 eatery offers a variety of doners with the type of meat and its accompaniments reflected in the nation after which the doner is named. There's a kebab for everyone — including vegetarians. At just 200 rubles they make the perfect portable snack late-night nibble. 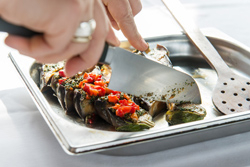 Flavorsome food on a boat

Moored behind Hotel Ukraina, Barkas (barge) was founded by television chef Lara Katsova. It specializes in the Ashkenazi cuisine of her hometown Odessa. Try the gefilte fish with horseradish (520 rubles), or fried barabulka (a type of mullet) 570 rubles. There's also hatzilim (eggplant dip), forshmak (herring salad) and, of course, matzo. 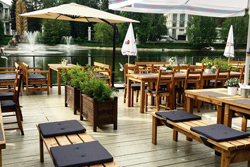 Lunch by the water

Leto is quite a walk from the VDNKh park entrance, but the view is worth it. Leto (summer) belongs to the restaurant company that owns the cafes Luch and Moloko and serves seasonal fare like shashlik (from 500 to 600 rubles) or traditional svekolnik (cold beet soup) for 300 rubles. The terrace is the perfect place to enjoy a glass of wine on a sunny day.

An interactive “Museum of Emotions” is about to open its doors in St.Petersburg, the gazeta.ru news website reported Tuesday.
news

A chorus donning black tuxedos and bowler hats twirl multicolored umbrellas as rain pours down on them from the stage rafters.
news

As the country slowly recovers from the long May holidays, so do the Moscow concert venues. This weekend offers you the perfect opportunity to sample...
Weekend Kitchen