Contribute Today
By Daria Litvinova
May 5, 2016

He lies in a glass sarcophagus. His eyes are closed, reddish beard and mustache trimmed, and his hands rest calmly on his thighs. Dressed in an austere black suit, Vladimir Lenin, the first Soviet leader, looks, on first impressions, to be sleeping. His image is so lifelike that it often scares children. Many adults assume it is a waxwork, rather than the actual body of someone who died 92 years ago.

And yet, it is Lenin's body, at least in part. If carefully monitored, nurtured and re-embalmed regularly, scientists believe it can last for centuries. During Soviet times, an extensive infrastructure was developed to ensure this happened.

The public may be divided over such a prospect, but for the time being the authorities seem committed to Lenin's care and keeping. Last month, the Federal Guard Service — territory near the Kremlin, including the mausoleum, falls into their jurisdiction — announced a tender for "medical and biological works to maintain Lenin's body" in 2016. The sum advertised was 13 million rubles ($197,000). 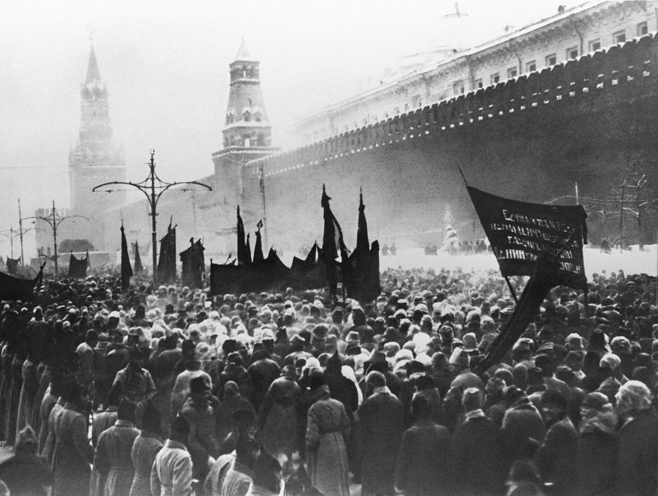 When Lenin died in January 1924, no one planned to preserve his body for this long. A renowned pathologist Alexei Abrikosov performed the usual autopsy on the body, and, among other things, cut its major arteries. "Later he would say that if he had known they would embalm the body, he wouldn't have done it," says Alexei Yurchak, professor of social anthropology at the University of California at Berkeley. "The blood-vascular system could have been used to deliver embalming chemicals to the tissue."

After the autopsy, Lenin's body was temporarily embalmed to prevent it from immediately decomposing, so that it could be put on display to give people a chance to pay their respects to the beloved Soviet leader. It was anticipated Lenin would then be buried on Red Square.

For four days, the corpse was kept in an open casket at the Union House (Dom Soyuzov) in the center of Moscow. People from all over the Soviet Union lined up to say their final goodbyes. Crowds of 50,000 people passed through the hall where the casket was placed. It was exceptionally cold outside, and, even inside, the temperature was minus 7 degrees Celsius. Contemporary accounts recall bonfires kept burning nearby to prevent visitors from freezing.

Despite the cold, more and more people, including foreign delegations, wanted to pay their respects to the deceased leader. So four days after Lenin's death, the government moved the casket to a temporary wooden mausoleum on Red Square and made it available for visitors. The corpse was kept cold and had not started to rot.

It was 56 days after Lenin's death that Soviet officials decided to preserve the body.

The first idea didn't involve embalming, but deep freezing the body. Leonid Krasin, the international trade minister at the time, was granted permission to acquire special freezing equipment in Germany. Yet in early March 1924, when preparations for freezing were gaining momentum, two well-known chemists Vladimir Vorobyov and Boris Zbarsky suggested embalming the body. They proposed using a chemical mixture that would prevent the corpse from decomposing, drying up and changing color and shape. Zbarsky argued that freezing was not the best option — decomposing would still continue even in low temperatures, he said.

At first, Vorobyov was reluctant to take part in the project. He was out of the Bolshevik government's good graces and was afraid to fail such a high-profile assignment and face retribution. However, he was one of the best in the field and had already successfully preserved several bodies using embalming techniques.

Eventually, after a series of government meetings and inspections of the body, the decision was made to give embalming a try. It was already late March — the weather was improving, temperatures were rising, and waiting longer could have caused permanent damage to the body.

The corpse had, in fact, already suffered damage by that point. Dark spots had begun to appear on the skin, including Lenin's face, and his eye sockets were deformed. So, for several months, scientists set about whitening the skin and calculating the correct chemical mixture for successful embalming. Under the pressure of reporting to Soviet officials, they worked day and night.

On Aug. 1, 1924 the mausoleum on Red Square finally opened for visitors. "Amazing! It's an absolute victory," Zbarsky was reported as saying. 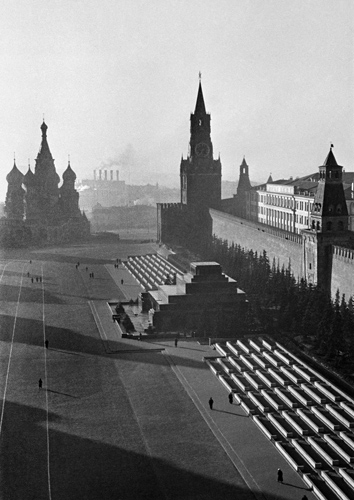 View over Red Square and Lenin's tomb, September 1941. The permanent granite mausoleum was completed in 1933.

From then on, a group of scientists has been tasked with maintaining the body. At the peak of its activity during Soviet times, the "Lenin lab" had around 200 specialists working on the project, according to Yurchak.

Today, the group is a dozen times smaller, but the work has hardly changed. Every few days scientists visit the mausoleum to check on the body, where it is preserved under carefully calculated temperature and lighting. And every 18 months the body is re-embalmed in a special facility located beneath the mausoleum. Here, scientists cautiously wash the body, immerse it in embalming liquids and inject it with the necessary chemicals.

Scientists managed to preserve Lenin's skeleton, muscles, skin and other tissues, but all internal organs have been removed, including the brain. Lenin's brain was meticulously examined by the Soviet "Brain Institute," created not long after Lenin died with the specific role of studying his "extraordinary abilities." Pieces of Lenin's brain are still preserved in the institute, which now forms part of the Neurology Center at the Russian Academy of Sciences.

In addition to ensuring the body looks natural, scientists nowadays also keep the joints working, monitor the condition of the skin, and sometimes replace damaged tissue with artificial material. Experimental treatments and new chemicals are usually tested on so-called "experimental objects" — unidentified embalmed bodies that are kept in the lab — in order not to accidentally damage Lenin.

The unique technique developed by Soviet scientists has resulted in several "customers" from abroad. Besides Lenin, the lab in Moscow also embalmed and preserved, among others, Vietnamese President Ho Chi Minh, Bulgarian leader Georgi Dimitrov, North Korean leaders Kim Il-sung and Kim Jong-il. Not to mention Soviet dictator Josef Stalin, whose embalmed body lay alongside Lenin from 1953 to 1961.

The embalming process was carried out in complete secrecy, with scientists from the lab, occasionally flying to Vietnam or North Korea to provide maintenance, reluctant to share information with their foreign colleagues. "Junior specialists — like I was at the time — weren't told any of the specifics," Vadim Milov, an embalmer who worked in the lab from 1987 to 1997, told The Moscow Times. "And yet I had enough information to travel to Vietnam to work on Ho Chi Minh's body."

Attempts by The Moscow Times to interview someone currently assigned to the lab were unsuccessful. After several written requests to provide comments, Nikolai Sidelnikov, director of the All-Russia Institute of Aromatic and Medicinal Plants, refused to provide access to the lab, saying it was "subject to commercial and state secrets."

Yurchak, who has been studying Lenin's body for years and has interviewed scientists of the lab, says such secrecy hasn't always been the case. "They gave plenty of interviews in the 1990s, one Russian television channel even filmed a detailed documentary featuring the facilities under the mausoleum. But the new management of the lab doesn't want journalists to turn their work into a joke, which they often do," the anthropologist said. It is quite likely that authorities have imposed a ban on talking to the media, he added. 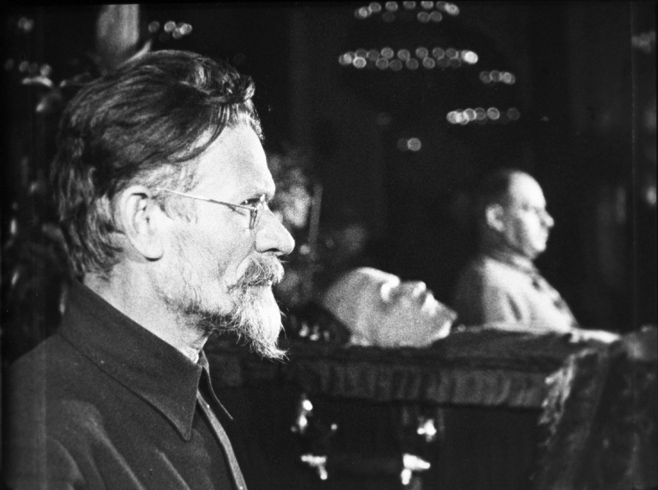 Still from the documentary "Woeful January of 1924." Bolshevik revolutionary Mikhail Kalinin stands in honor guard near Lenin's tomb. Kalinin was an ally of Stalin during the power struggle that followed Lenin's death.

Lenin's lab hit hard times after the Soviet Union collapsed. In 1991 many of Russia's new democratic rulers called for the demolition of the mausoleum, and for Lenin to be buried elsewhere. This caused a big protest, recalls Yevgeny Dorovin, State Duma deputy from the Communist Party and chair of an NGO supporting preserving the mausoleum in its current state. "A lot of people went to Red Square to protest this blasphemy," he says. "Fortunately, the commandant of the Kremlin garrison eventually came out and calmed everyone down, and told them that the mausoleum is safe."

But the government pulled the plug on the project's funding, once again putting the future of the mausoleum under question. The Communist Party responded by collecting donations to support the mausoleum and the scientists who worked on maintaining Lenin's body. "We paid for everything except gas, water and electricity," Dorovin said, though he refused to specify how much money the foundation raised and spent. The state only began funding the mausoleum again a couple years ago, he added.

The Federal Guard Service told The Moscow Times "it was impossible" to reveal how much had been allocated to preserving Lenin and the mausoleum. They also refused to specify at what time they became responsible for the mausoleum.

The bigger threat to the future of the mausoleum is generational. The scientists are getting older, and there are no young scientists willing to replace them. "Young people are not that interested in mausoleum science, it's not prestigious anymore," Yurchak says.

There is one obvious solution, but the idea of burying the Soviet icon is not a popular one among the Lenin scientists. If that were to happen, it would mean an unparalleled 92-year-long experiment will come to an end. "It would represent a loss of science, studies and discoveries — that is what scientists fear," says Yurchak.

In the meantime, the mausoleum is closed — but only temporarily: Authorities are preparing Red Square for the Victory Day Parade on May 9. It will open again on May 18, with Lenin looking as sprightly as ever.

The cost of maintaining the body of former Soviet leader Vladimir Lenin in the mausoleum on Moscow's Red Square is estimated at 13 million rubles ($197...
deadly attacks