Contribute Today
By The Moscow Times
May 5, 2016

If any city has the right to call itself the city of Chekhov, it's Moscow. Although the great playwright and short story writer was born in the south of Russia, he spent most of his adult life in Moscow and it was here that he solidified his status as one of the pillars of modern theater.

"Chaika" (The Seagull) is probably Chekhov's best-known work. It focuses on the relationships and conflicts — both artistic and romantic — between Arkadina, an aging actress, her lover celebrity writer Trigorin, her son Treplev, and their neighbor Zarechnaya.

An enduringly popular play, "The Seagull" has recently acquired a new subtext due to allegations of criminal activity concerning Prosecutor General Yury Chaika and his family. The connection became obvious when opposition pranksters installed a fake Seagull billboard in front of the Sovremennik Theater building. In another incident at the premier of "Theatrical Insomnia: The Seagull" at the Stanislavsky Electrotheater, Pussy Riot's Nadezhda Tolokonnikova wore a seagull mask advertising her new video about the prosecutor.

Whether you're a traditionalist, or a fan of modern interpretations, Chekhov's seminal play can be seen at many of Moscow's theaters. Here are our top picks.

"Theatrical Insomnia: The Seagull" at the Stanislavsky Electrotheater 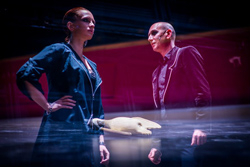 Treplev's argument with his mother about the "new forms" versus "routine theater" is taken very literally in this avant-garde performance. The "new forms," of course, win. The production is experimental in more ways than one. Firstly, you can only see the performance late at night — hence the insomnia. The play starts after midnight and during the breaks you see additional performances, including some Chekhov-inspired rap music.

Secondly, each of the three acts is the work of a different director, and all three of them are up and coming talents: Yury Muravitsky, Yury Kvyatkovsky and Kirill Vytoptov. Finally, each act in itself is an experiment. Muravitsky's interpretation of "The Seagull" is a catwalk where each of the characters is a model repeating his or her key lines from the play. Kvyatkovsky's act is a series of improvisations in which actors adopt and shed identities faster than you would have thought possible. Vytoptov's final act is set at a bar, where Chekhov's characters meet their contemporary equivalents. These include Elvis Presley and Amy Winehouse lookalikes. It's in many ways a surreal experience, but an invigorating one.

"Chekhov" at the MOST Theater 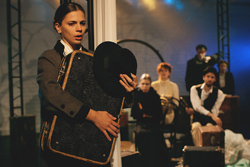 An amalgamation of Chekhov's best works

MOST stands for Moscow United Student Theater. While it may have started out as a student-led initiative, most of the actors nowadays are either semi-professional or working at the theater full time. "Chekhov" is not one but three plays: "The Seagull," "Three Sisters" and "Cherry Orchard." All three plots take place on the stage simultaneously. Director Georgiy Dolmazyan put together a jigsaw puzzle of scenes taken to conjure up a whole new Chekhov's universe.

Of course, there is no time for all the scenes from all 3 plays in one performance, but MOST's production manages to capture the central themes of each in an imaginative way. If you know Chekhov's lines well enough you will be able to distinguish where one ends and the other one begins. If not, it will look like a single seamless performance. Gradually, you come to realize that the main character is not one of the numerous people crowding the stage at any given moment, but the master himself, Chekhov. Familiar characters, problems and scenarios as well as the search for answers to life's fundamental questions invite you to delve deeper into Chekhov's creative world.

"The Seagull" at the Satirikon Theater 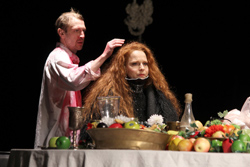 Vast in proportion and possibility

One of the best-known interpretations of "The Seagull" is by the critically acclaimed director Yury Butusov from St. Petersburg, played at the Satirikon Theater. A peculiarity of Butusov's performances is the repetition of the same scene, each time performed in a different mood. This technique is used generously in "The Seagull." Zarechnaya's monologue when she meets Treplev after being gone for two years goes from psychotic to calm, from tragic to cheery, all played one after the other.

Butusov also employs unusual choices for his actresses. Zarechnaya is played by an older woman, while Arkadina by a younger one. There's quite a bit of confusion about which actors are playing which at points because characters switch from one to the other more than once. The performance features an upbeat soundtrack and plenty of dancing, with Butusov himself leading the way. It's one of the longest versions of "The Seagull," lasting more than four hours with three intermissions.

"The Seagull" at the Tabakov Theater 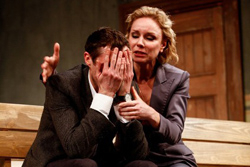 Director Konstantin Bogomolov, known for his scandalous interpretations of classics by such writers as Oscar Wilde and Fyodor Dostoevsky, sticks to the letter in this traditional version of "The Seagull." Yet Bogomolov still finds ways to insert interesting elements even in a completely traditional performance. To begin with, stage arrangements are quite unusual. The whole first half is performed on benches which in turns face the audience and away from it. The backdrop itself is a screen with a projection of the action onstage. Except that on the screen there is an actual curtain, absent on the real stage. This setup casts the whole production in a somewhat surreal, post-modernist light. To add to the feeling sometimes there is a text on the backdrop notifying where and when the action is taking place ("Tree," "Day of departure," etc.). The second act, in total contrast to the first, uses traditional stage decorations — the interior of a house complete with cupboard, table, and chairs. Another twist is that Zarechnaya is played by one actress in the first act and a different one in the second. First part's Zarechnaya is a young flirty girl, while the second act's Zarechnaya is a hollowed out, grim middle-aged woman.