Not two months have passed since President Vladimir Putin declared mission accomplished in Syria, and again the war-ravaged nation is on the brink. Russia's partial withdrawal coincided with the launch of a new round of UN-mediated talks in Geneva. But with negotiations falling apart, the status quo of full-blown civil war appears poised to return in the absence of a political settlement.

On April 21, representatives of the Syrian opposition walked out of the Geneva talks, citing continued attacks on civilians in the rebel stronghold of Aleppo, situated in northern Syria. As fighting flares up again, the United States and Russia appear to be losing what little control they had over the situation.

"Both sides are frustrated with the Geneva talks," says Yury Barmin, a Russian political analyst. "Russia sees that the United States failed to keep the [Syrian opposition] at the negotiating table, while the United States is frustrated with the buildup of Russian weapons near Aleppo." The situation is quickly reverting to pre-Geneva form, and Moscow faces the possibility of being stuck in Syria for the long term.

U.S. officials have expressed concern that Syrian President Bashar Assad is preparing a new assault on opposition territory, and The Wall Street Journal reported on April 20 that Russian artillery units were moving in, potentially to support a renewed offensive. But Barmin doubts this is the intent. Instead, "Russia's buildup is a means to send a signal that it is in the opposition's interests to stay at the talks."

Moscow is likewise frustrated at what it perceives to be a failure by the U.S.-backed opposition to distance themselves from Syria's local al-Qaida affiliate, the al-Nusra Front. The organization is not covered by the current, faltering cease-fire. The Syrian air force has used this as an excuse to hammer Aleppo with air strikes in recent days, and U.S.-backed opposition fighters and civilians have been hit by these attacks. 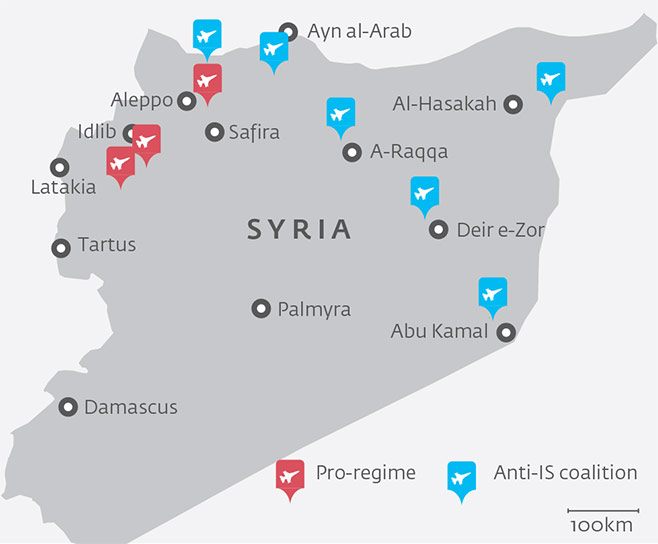 Source: Institute for the Study of War

"There was a hope that once both sides were in Geneva, they would be able to start discussing political transition in Syria," Barmin says. Agreeing to a cease-fire, however, is easier than agreeing on the political future of the country, and on this a settlement has not been forthcoming. Fundamental differences continue to drive the conflict, and Assad appears to be in the driver's seat — not Putin.

It is in Moscow's best interest for talks to continue. Assad's military is weak, and continued fighting risks a regime collapse. Putin needs Assad's regime to survive to protect Russian military bases and other interests in Syria. But it also needs Assad to compromise, so that Russia can present itself as a crucial partner to the West in facilitating an end to the civil war.

The Syrian leader has shown little sign of backing down. "Assad has essentially shrugged off Moscow's interests, and he believes that Russia has no choice but to support the regime no matter how intransigent he gets in peace talks," says Vladimir Frolov, a Russian international affairs expert. "And he has been proven correct, for the moment. Moscow is kind of stuck in Syria."

Assad's obstinate stance risks creating real dilemmas for Russia. At times, it appears the embattled leader believes he can once again be ruler of all Syria. He has rejected several proposals calling for the federalization of Syria, or his stepping down as its leader. This position has complicated Moscow's support for Syrian Kurds, largely proffered to spite Turkey.

If Assad resumes offensives against opposition groups, especially in Aleppo, it will ultimately undermine Moscow's broader objective in Syria That is, to present itself as a useful and invaluable partner in the peace process. The more it appears that Putin doesn't have full control over the situation, the less valuable Moscow becomes for the peace process — leaving its place at the negotiating table increasingly vulnerable.

"The best strategy for Moscow," says Frolov, "would be to adopt a defensive posture in Syria: Protect its positions in Latakia and Tartus, while launching air strikes elsewhere only as a warning and only when Assad's position is seriously weakened."

Even this, of course, would be a tacit recognition by Putin that his mission has not been accomplished and that Assad is, in fact, the president driving events in Syria.