The Novodevichy convent is a rare glimpse of tranquility in Russia's bustling capital. Perched on the banks of the Bolshoi Novodevichny Lake, the convent's golden domes and soaring bell towers have given refuge to Moscow's needy since the 16th century. When cultural and scientific agency UNESCO designated it a world heritage site in 2004, no one doubted its place among Russia's cultural gems. After surviving both the purges of Napoleon and Stalin, the convent's future finally appeared secure.

The fire came suddenly, on a dark March night in 2015. Gathering crowds of onlookers jostled with firefighter crews as the blaze lit up a gloomy sky. Flames had originated in one of the convent towers under restoration, quickly spreading along the rows of scaffolding that surrounded the historical monument. The fire was blamed on the inexperienced restoration company, which was consequently fined 1 million rubles for damages.

But despite being extinguished within hours, and although no serious damage had been done to the tower itself, the incident has had serious repercussions. On March 15, 2016, exactly one year after the Novodevichy fire, Russia's Federal Security Service (FSB) raided the Culture Ministry at their offices in Kitai-Gorod. Deputy Culture Minister Grigory Pirumov was arrested, along with other officials and the chief of the Baltstroi construction company. The charge: embezzlement, in a scheme involving a number of priceless heritage sites — including the Ivanovsky convent, the State Hermitage in St. Petersburg, and the Izborskaya fortress in Pskov.

According to prosecutors, money set aside for the restoration of Russian heritage sites had been diverted into the pockets of Pirumov and others.

Currently, investigators are trying to prove that the Baltstroi construction company, which has executed dozens of government restoration contracts, collaborated with ministry officials to carry out the scheme.

Konstantin Mikhailov, head of the Archnadzor activist movement — an organization which helps preserve and safeguard historical monuments — has dubbed the scandal RosOkhranGate, or, RussianPreservationGate. He is one of many activists and restoration experts who say that they have been sounding the alarm for years, and that the current case is just the tip of the iceberg.

Aside from allegedly siphoning off of public funds, the Culture Ministry is responsible for hiring unqualified companies whose poor quality renovations have irreparably damaged Russia's cultural legacy. Reports in 2013 from the town of Pskov detail the disappointment of local residents with the restoration of the Izborsk fortress, a 14th-century stone castle in one of Russia's most ancient towns. When they asked conservation and restoration experts from across Russia to come and evaluate the restoration, a team led by Mikhail Milchik — architect, art historian, and member of the St. Petersburg government council for the preservation of cultural heritage — promptly headed to the city.

What they found was a disaster. The work was careless; the materials and methods used were unsuitable. The damage spurred the expert commission to write to the Culture Ministry in early 2014.

Yet the restoration efforts continued. Two of Pskov's churches from the Middle Ages were deemed restored, but their walls developed colorful fungus within a year, the result of unsuitable materials.

Pskov is just one of many such examples, according to Mikhailov.

At the Avraamiyev-Bogoyavlensky monastery in Rostov, works intended to save the monument caused a large piece of the ancient building to collapse. Although the company responsible was fined, nothing can compensate for the loss of Russia's first 12th-century church with multiple chapels.

At Tambov's Aseev manor — an elegant building of gleaming-white Art Nouveau facades crafted by renowned architect Lev Kekushev — recent restoration cost about 400 million rubles. The work was an utter waste of money, as the poorly chosen construction materials refused to adhere to the original structure, Mikhailov said. Another series of restoration works will be needed to repair the damage.

A fortified monastery, dating from the 15th century, can be found on the Solovetsky Islands in northern Russia's White Sea. Last year, architects, restoration experts and preservation activists petitioned a UNESCO commission to intervene in a new project commissioned by the Culture Ministry which would see the construction of a new building just 200 meters from the Solovetsky Monastery, destroying the integrity of the heritage site. Despite government promises that work would stop, construction continues. "UNESCO hasn't seen that yet," says Mikhailov. 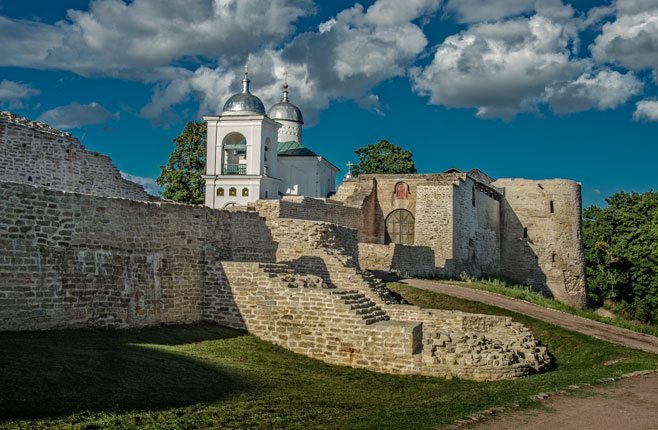 At the Izborsk fortress, work worth 186 million rubles — more than half of the funds assigned to the project —was never completed.

When discussing Russia's current restoration woes, experts consider management the problem. Many believe the current system — where both construction and restoration work are controlled by the same deputy minister — is the cause of the trouble.

Pozhigailo, head of the Khranitely Nasledia (Guardians of Heritage) activist movement, and deputy culture minister in 2006-2008, insists that that the two fields must be kept separate.

"New construction is more profitable than restoration," he says, adding that the Culture Ministry would prefer the former.

Other challenges for experts include the public tender system: a bidding process open to all licensed companies, where a bid is supposedly chosen after weighing the merits of cost against quality.

Pozhigailo, however, believes that successful bids for restoration projects are determined solely on cost.

These winners are frequently giant construction companies, such as Baltstroi, who have little if no experience in restoration, but cost little — unlike smaller companies with qualified experts. "Only large companies can compete in such a market," says Pozhigailo.

"If you want a good architect and a qualified expert to be invited, you should conduct personal contests, not contests for the lowest [price]," he says.

As a result, restoration work is often carried out by builders. Mudrov says that he has witnessed cases where monuments were in better condition before restoration than after it. "Ninety percent of the conservation-restoration happening at historical buildings is actually just renovation-style reconstruction," he says. He's often seen some contractors adding modern elements such as suspended ceilings or linoleum flooring. "In general," he says, "restoration has become part of the construction field."

The situation is exacerbated by inflexible current laws. The scope of work — or the price quoted for a project — cannot be amended after a government contract is signed. Yet experts stress that re-evaluation is an essential part of the restoration process. The discovery of culturally significant remains can add untold historical insight into a building. Such findings require that the project be re-evaluated and plans amended.

Art conservation experts, architects and activists are currently campaigning for more transparency and public participation in decisions made about historical restorations and preserving cultural heritage throughout Russia.

What Milchik and other campaigners want most of all is a separate agency that would curate conservation and restoration. For now, his dreams are a more modest. The current tender commission is composed almost entirely of ministry officials: Milchik and his colleagues want amendments that require the commission to include experts from different fields, and the annual restoration report to include independent organizations, not only local officials. As the embezzlement enquiry rumbles on, it is a matter of small, steady steps. 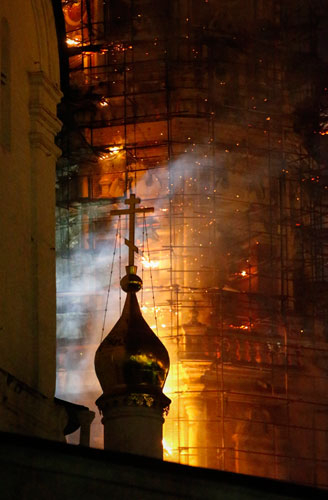 The bell tower of the Novodevichy convent burns in March 2015. The UNESCO world heritage site was undergoing restoration work at the time, and the inexperienced company responsible for the building work was fined.

"In order solve the challenges the field is facing, we should be talking about dismantling the entire system," says architect and conservation expert Natalya Dushkina.

She and other experts in her field gathered to discuss the uncertain future of Russia's cultural heritage last week. The atmosphere was grim — all participants have long been aware of the systemic problems and hope that that the Culture Ministry's embezzlement scandal will serve as a wake-up call for both the government and the media. They agree that concrete steps must be taken swiftly to prevent any further damage.

Times could be changing. At the end of March, the Culture Ministry temporarily halted the restoration of the Koporye fortress in the Leningrad region following objections by 11 experts. According to protesters, the cost of the work was overstated by the contractor by at least 50 million rubles.

Mikhailov hopes that this kind of action will no longer be the exception for such cases. He is hopeful as he notes that, in light of the recent scandal; the Culture Ministry has begun preparing a number of amendments that will soon be revealed to the public.

Yet, for now at least, such action remains rare — and for many of Russia's prized cultural monuments, it has come too late.

Moscow will spend up to 4 million rubles ($79,000) replacing the paving of a pedestrian square in front of the Kremlin that was chewed up by tank treads...
upheld sentence

He now faces up to three and a half years in prison at a court hearing into his 2014 Yves Rocher fraud sentence after his appeal was dismissed.