Springtime in the disputed territory of Nagorno-Karabakh is predictable enough. As sure as the plane trees begin to flower, skirmishes break out between Azeri and Armenian troops.

On April 2, however, the typically short-lasting, day-long ritual morphed into the makings of a serious international crisis.

Armenia and Azerbaijan have been fighting over Nagorno-Karabakh since 1988, when the Soviet Union began to collapse. As Moscow started to lose control of its extremities, the largely ethnically Armenian Nagorno-Karabakh tried to split from Azerbaijan. The conflict that erupted claimed 30,000 lives and displaced up to one million people, before a Russia-brokered cease-fire agreement was signed in 1994.

The war may have ended, but peace was never secured. Both sides dug in, and constructed miles upon miles of trenches. Across a no-man's land of barbed-wire and mines, 20,000 Armenian and Azeri soldiers stare each other down. Over the past year, both sides have added heavier and heavier equipment.

The clear takeaway from this weekend's hostilities is that the conflict Nagorno-Karabakh is ready to boil over. The fighting was the worst seen since the 1994 cease-fire, and claimed at least 50 lives, including several civilians. But the most significant difference between the clashes that sparked on April 2 and all previous skirmishes was their length and intensity.

Azerbaijan appears to have struck first, responding to an unspecified provocation across the entire line of contact. "It was a strategy designed to seize, secure and hold parts of the occupied territories," says Richard Giragosian, director of the Yerevan-based Regional Studies Center, an independent think tank.

Armenia claimed to have retaken territory seized by Azerbaijan. By the time both sides stopped shooting at each other on April 5, it indeed appeared that the previous status quo has been more-or-less preserved.

Azerbaijan is frustrated with the de facto occupation of its sovereign territory, but changes in domestic politics are the major driver on the Azeri side. The collapse in global oil prices has hit the Azeri economy hard and President Ilham Aliev is under pressure to pursue victories in Karabakh. "War is the best distraction," says Simon Saradzhyan, a fellow at Harvard University and native of Karabakh. 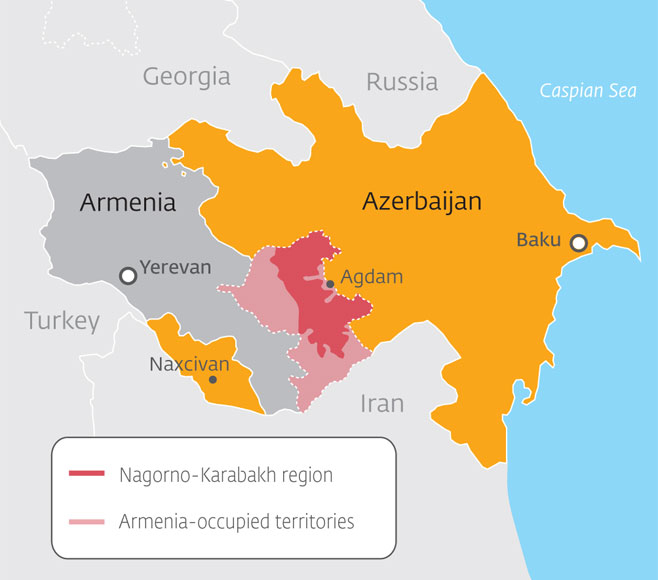 Then, there is Turkey. Moscow's feud with Ankara has further complicated an already tense situation in the southern Caucasus, which is flanked by Russia and Turkey. Azerbaijan is ethnically tied to Turkey, and there is no love lost between the Turks and Armenians. On April 3, Turkish President Recep Erdogan blustered that Turkey's Azeri brothers would triumph over Armenia and retake the occupied territories.

Armenia, in fact, has the upper hand in the conflict, in that it still controls the high ground in Karabakh. On one level, Turkey is antagonizing the situation. On another, it might, just might, get drawn into a deeper war. "Erdogan too is politically obligated to support Azerbaijan against Armenia," says Saradzhyan.

On the other side of that equation is Russia — a close ally of Armenia and obligated to protect it from foreign military aggression. The good news is that Russia has far more ability to influence the situation than Turkey has. It has strong economic ties with both Baku and Yerevan, and is home to strong diasporas from both countries. Azerbaijan is also a large buyer of Russian arms, spending around $4 billion in recent years.

Russia is pushing for both sides to lay down their arms and set terms for a renewed cease-fire. Putin held a phone conference with the leaders of Azerbaijan and Armenia on April 5. On April 7, Prime Minister Dmitry Medvedev is due to fly to Yerevan, while Foreign Minister Sergei Lavrov heads to Baku. Russia's Defense Ministry is also reportedly in touch with its counterparts.

That this coincides with similar delegations from OSCE members like the United States and France would indicate the international community is coordinating efforts to prevent another destabilizing crisis.

But bad blood runs deep in the South Caucasus. A war may have been prevented on April 5, but the can has simply been kicked down the road. The intractable conflict for Nagorno-Karabakh has not come any closer to a peaceful resolution. Instead, a precedent has been set: weapons like flamethrower-tanks and indiscriminate heavy rocket artillery are now fair game.

War has a nasty logic of its own, says Saradzhyan.

The April 1 line of contact may be restored by negotiations in the coming days, but Nagorno-Karabakh will remain an unrecognized self-governing state populated by Armenian Christians.

It will still be surrounded by a predominantly Muslim Azerbaijan that is becoming rapidly dissatisfied with the Armenian occupation of 17 percent of its territory.

Something, eventually, will have to give.

Turkish President Recep Erdogan predicted that the breakaway region of Nagorno-Karabakh will one day return to its “original owner” — Azerbaijan...
opinion

What’s Behind the Flare-up in Nagorno-Karabakh? (Op-Ed)

The Nagorno-Karabakh conflict has long been regarded as a tinderbox in the heart of the South Caucasus — with serious implications for the wider region...
news

A cease-fire ending the violence in the disputed Nagorno-Karabakh region was agreed in Moscow on Tuesday, the RBC news agency reported Wednesday, citing...
Ongoing Battle