Battle of the machines

What better way to spend your evening than watching incredible hulks of metal battle annihilate one another? Bronebot season will kick off on Sunday with a much anticipated robot-battle between Britain and Russia. The international competition is judged by an independent panel on criteria such as the robots' aggression, damage to the enemy and overall strategy. The 3-day event will feature over 30 battles and expects to attract 40,000 spectators. 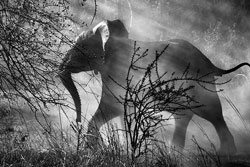 "Genesis" is the latest project from internationally-renowned photographer Sebastião Salgado. He has spent the last eight years traveling the world and documenting the wildlife and landscapes he encounters. The exhibition, which showcases remote regions as yet untouched by humankind, aims to highlight the environmental issues we are currently facing as a planet. The black and white images have already toured widely and are currently on display at Moscow's Mouravieff-Apostol Museum.

Ramona, like all of the best romances, tells the story of two star-crossed lovers. The twist? They are steam engines. Prepare to be dazzled by the innovative and logic-defying effects of the skillful puppeteers in this charming marionette performance at the Museum of Moscow. A wonderful evening of alternative theater from Rezo Gabriadze's puppet theatre. 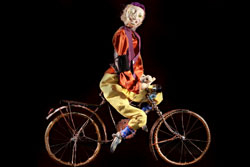 A second offering from Gabriadze. Stalingrad is not so much a dramatization of the battle but a sweeping tale of life's eccentricities told by an astounding lineup of puppets. Surreal to the extreme, we wouldn't recommend attending if you're a stickler for historical accuracy. A unique interpretation of events brought to life by a dazzling production. 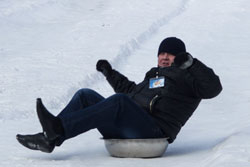 A celebration of the weird and the wonderful

On Tuesday Sokolniki Park will play host to its fourth annual Battle of the Sleds. The event celebrates the wacky creations of sledding enthusiasts, allowing them to put their innovative designs to the test. Although it's too late to enter, you can enjoy watching participants slide down the run on their inventions at breakneck speed. The icing on the cake? This year's competition is intergalactic-themed. 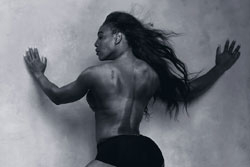 The Multimedia Art Museum (MAMM) just kicked off the 2016 Moscow Biennale of Photography. The event will be taking place over the next seven months with dozens of shows at various locations throughout the city. Over the weekend, check out three shows that span the centuries at MAMM. Start with works by William Carrick and John MacGregor, pioneers in ethnographic photography, whose pictures are collected here in "The Russian Empire: 1860-1870." Next, see life under the Bolsheviks in a show of Mikhail Smodor's works, called "A Regional Town of Galich: 1900-1930." And end your day at the exhibition of the 43rd Pirelli calendar, this year an unexpected series portraits of powerful women done by Annie Leibovitz.

A selection of Moscow restaurants opened this week.
news

What To Do With Your Kids on a Long Moscow Weekend?

What do you want to be when you grow up? This is the question that KidZania, a lavishly realized indoor city for children, asks the miniature workers who...
news

If you're working on a Russian schedule, this will be a long weekend, but a weekend that will only start on Saturday night. This holiday weekend marks...
weekend kitchen

Flash back to childhood or discover adult delights with these classic mid-century sweet pastry treats.