When Prime Minister Dmitry Medvedev took to the stage at the Munich security conference, he left no doubt as to who had sent him.

"Before coming to this conference, I met with President Putin," he said, looking down at his notes. With a nervous sweep of his arm he continued: "We talked about his speech in 2007 … [about] ideological stereotypes, double standards and unilateral actions."

The hall fell silent. Those who had come to see the soft side of Russian diplomacy realized they might have been given the wrong briefing notes.

Putin's relations with the West have been fraught with tension ever since Russia's annexation of Crimea in March 2014. But in the month before Munich, there had been hope that Russia was looking to compromise with the West — forced to the negotiating table on the back of plunging oil prices and a stalling domestic economy.

There were some promising signs. On Jan. 11, Putin unexpectedly sent his envoy Boris Gryzlov to Kiev to meet with Ukrainian President Petro Poroshenko. Four days later, his special advisor on Ukraine, Vladislav Surkov met with the U.S. State Department's top European hand, Victoria Nuland. The subject of Ukraine had also long disappeared from the attack agendas of Russian state television.

The West offered clear prospects for a relaxation of the sanctions regime in July 2016. Speaking at the Davos summit on Jan. 22, U.S. Secretary of State John Kerry said it was "possible" that "in the next months … [we will] get to a place where sanctions can be appropriately … removed." French Prime Minister Manuel Valls even traveled to Moscow to discuss movement on sanctions.

Most onlookers assumed that the Russians were serious about demonstrating a "soft" side in exchange for sanctions relief. Putin's decision to send Medvedev to Munich, rather than more hawkish members of the Kremlin elite, was seen in this light.

In Munich, Medvedev issued a clear and contrary message. Russia would not be held hostage to the West's demands, he said: If sanctions were lifted, it would be because the West realized their mistake, not because Russia had stooped to its demands.

Kerry responded in kind, by reiterating there could be no talk of easing sanctions until Russia and its proxies played ball. "Russia has a simple choice: Fully implement Minsk or continue to face economically damaging sanctions," he said.

The situation on the ground suggests full implementation of the Minsk agreement will not happen soon. Since the new year, international monitors have recorded the regular use of heavy artillery by both sides, including "grad" missile systems.

Meanwhile, in an interview to the Russian "Profile" magazine on Feb. 15, Russian Deputy Foreign Minister Grigory Karasin cast doubt on the prospect of returning Ukrainian control to its eastern border — another key condition of agreement.

Speaking to The Moscow Times, political analyst and Kremlin ally Alexei Chesnakov said that implementation of Minsk was already of the order of "complete fantasy."

Chesnakov claimed that Moscow's position on Ukraine had not, in fact, changed: "All the signals that Moscow has sent in recent times have been not about any softening of its position, but about widening the field for dialogue. Moscow has not signaled a readiness to make compromises, and its demands have remained unchanged. What we need are changes to the Constitution, legislation on the special status of Donetsk and Luhansk, and legislation on elections. And we're at a dead end on all of these."

With Ukraine teetering on the brink of political collapse, President Petro Poroshenko is indeed unlikely to be able to deliver on any of these fronts.

The issue of constitutional changes, particularly controversial in Kiev, is for the time being a no-go. The last time it was discussed, four national guardsmen were killed outside parliament when a live grenade was thrown during disturbances. In January, Kiev introduced a thinly veiled holding tactic, referring the timing of the commitment to the country's Constitutional Court. 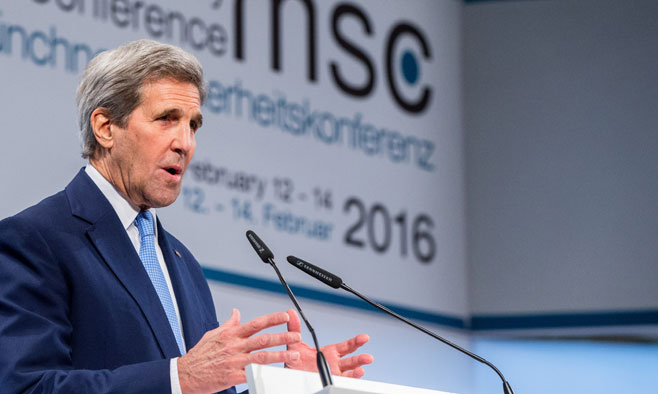 U.S. Secretary of State John Kerry said in Munich that the cease-fire agreement for Syria was "ambitious" and the real test would be actions on the ground.

Any illusions about an accommodating attitude of Russian foreign policy were also shot down by assertive positions on Syria.

While The Moscow Times has learned that Medvedev changed the wording of Syria sections of his speech following the Munich agreement, there is little sign Russia is prepared to change its military operation in Syria.

In the weeks leading up to Munich, Russian bombers helped the regime of Syrian President Bashar Assad launch an onslaught on the city of Aleppo and its suburbs, a former rebel stronghold. Panic spread as tens of thousands of civilians fled Syria's largest city towards the Turkish border.

Western leaders denounced the strikes amid concern it would exacerbate the humanitarian crisis and refugee flows to Europe. The deal brokered between the United States, Russia, Iran, Turkey, Saudi Arabia and other countries on the eve of the Munich conference was hailed by Kerry as "ambitious." Others, such as U.S. Senator John McCain, suggested it was delusional.

For Russian international affairs expert Vladimir Frolov, the timing of the truce deal was no accident, and came at a time when Moscow's bargaining position on Syria was strong.

Russian aerial forces had helped the forces of Assad deliver a crushing blow to the opposition, weakening their bargaining power ahead of the talks. It also increased pressure on the West to accept Assad as part of the solution, rather than the problem.

Frolov says the Russian negotiating tactics reflect a "fight as you talk" arrangement. This approach shares many similarities with Ukraine, where Russia and its allies went into discussions from a position of military strength: first in September 2014, following crushing reverses for the Ukrainian side in Ilovaisk and elsewhere; and again in February 2015, when Ukrainian soldiers were essentially encircled in Debaltseve. 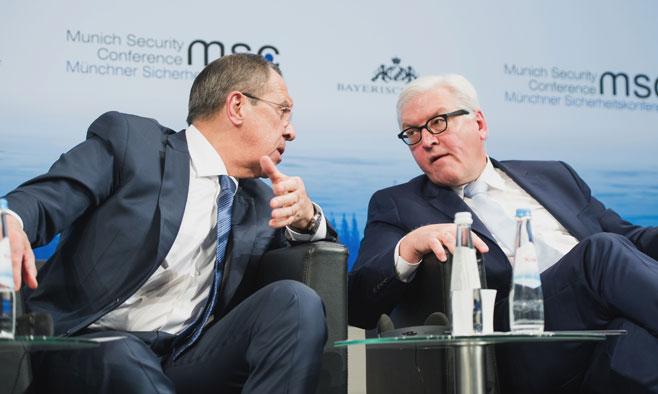 Russian Foreign Minister Sergei Lavrov and his German counterpart Frank-Walter Steinmeier speaking on a panel at the security conference in Munich.

Critics have noted the amount of wriggle room contained within the Munich declaration, which, they argue, undermines the value of any "ceasefire." The agreement, for example, exempts any action taken against "terrorists." But if the West targets terrorist groups — such as Islamic State and al-Nusra — Russia's definition of terrorists is much more flexible. It includes more moderate opposition groups that receive U.S. backing.

Further complicating matters, many of the warring factions have intermingled on the battlefield. That provides Russia with cover to continue its air campaigns, even under a cease-fire deal.

"They are all bandits and terrorists," Medvedev told Time magazine a day after the deal was announced. Those "who run around with automatic weapons" are fair targets, he added.

Few of those speaking at the Munich conference expressed confidence that the Syria deal would hold. Even before the officials left German soil, cautious optimism had given way to further distrust.

Lavrov said he thought there was a "49 percent" chance the Munich deal would be successful. His German counterpart Frank-Walter Steinmeier put the odds at 51 percent. Britain's Philip Hammond quipped that, considering Lavrov's remarks, the success rate was more likely to be zero.

From Russia's perspective, what matters is not whether the cease-fire holds, but who is seen to be the bad guy if it fails.

"If Moscow is seen as the aggressor and antagonist, then there is some political cost," says security analyst Mark Galeotti. "If, however, the blame can be pinned on Turkey, or IS, then Moscow can fake dismay and resume its bombardments." It remains to be seen whether Russia's Syrian operations will continue to come at little cost to the Russian regime.

French political expert Marie Mendras says that the Syrian campaign is inherently much riskier than any previous operations in Ukraine. "There are more nasty players involved and the situation is much more uncontrollable and unpredictable than in eastern Ukraine," she said.

Galeotti agreed that there are few givens when it comes to Syria. Despite Russia's success in helping Assad regain some of his fighting power, outright military victory remained unlikely, he said.

At the same time, Russia has shown that it will follow what it sees as the military need, regardless of the political or economic cost. How long this can continue given its nosediving economy is another question.

Russian Prime Minister Dmitry Medvedev in a speech at the Munich Security Conference urged Western countries to end confrontation with Russia and instead...
news

Russia's official delegation will be led by Prime Minister Dmitry Medvedev — the message seems to be that Russia is ready to talk about sanctions relief...
opinion

Lessons From Munich: We Need Cooperation, Not Confrontation

Politicians and scholars from all over the world recently gathered at the Munich Security Conference (MSC) to discuss global security issues.
Evacuation Plan

The United States is not "at this time" organizing an evacuation of American citizens from Ukraine.