Four years ago, 18-year-old Vitaly Danilenko was conscripted into the Russian military after his family returned to Siberia from Alaska. Raised in America, the young conscript spoke very little Russian, and was unable to communicate with his comrades and superiors.

This state of affairs lasted a mere two weeks before Danilenko went AWOL, deserting his post — a violation of Russian law that threatens up to seven years in prison — and going on the run. According to Russian media reports, his family said he fled because of the language barrier.

No one was sure what to do with the young conscript. Russian military service laws, according to one Russian media report from the time, simply did not recognize inability to communicate in Russian as grounds for dismissal. No reports exist of his arrest.

Danilenko's story serves as a cautionary tale to both the Russian military and foreigners who might be interested in joining its ranks and fighting in actual combat — an opportunity highlighted by President Vladimir Putin on Jan. 2, 2015, when he signed an order allowing foreigners to enlist.

According to the Defense Ministry's official guidelines for foreign recruitment, any foreigner between the ages of 18 and 30 can enlist in the Russian military under a five-year contract, provided they can present proof from a Russian institution that they speak Russian, have no criminal record, and can pass a series of professional, psychological and medical exams administered by an official recruiter in Russia.

The change was aimed at formalizing working relationships between the Russian military and citizens of Central Asian and former Soviet nations where Moscow has stationed troops and maintains bases, but does not explicitly deny Americans, or citizens of any nation, from joining.

Despite well-documented instances of brutal hazing in the Russian military and the relatively low levels of pay enjoyed by Russian soldiers, news of Putin's foreign legion fell on receptive ears far beyond the borders of the former Soviet Union.

For the past year, The Moscow Times has received regular emails from readers interested in joining the Russian military and requesting assistance with speaking to a recruiter. In one instance, a reader appeared to believe a Moscow Times reporter was a recruiter for Russian intelligence. 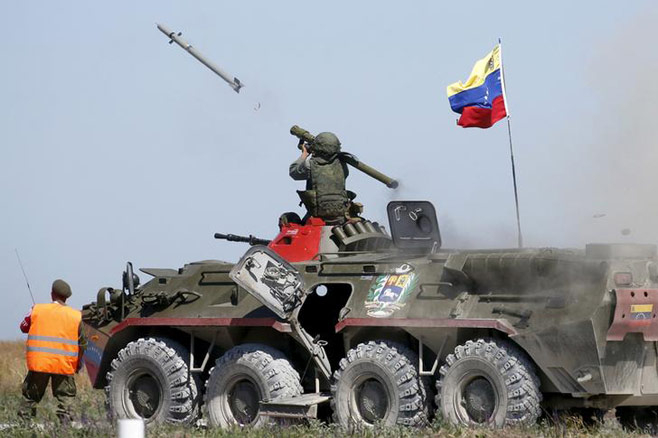 A serviceman from Venezuela fires an antiaircraft missile during the Air defense battle masters competition as part of the International Army Games 2015 in the port town of Yeysk, Russia, Aug. 9, 2015.

Playing to the Fringe

Broadly speaking, those Westerners interested in joining up appeared to hold relatively anti-establishment views — members of an audience that Russian foreign media outlets like RT deliberately target — or echoed positions championed by politicians such as Donald Trump and Nigel Farage.

In this way, the allure of serving in Putin's military fits within the larger narrative of the Kremlin's success in engaging with and appealing to fringe elements of Western societies — taking advantage of their diverse nature by playing to the margins, where individuals often define themselves in opposition to the majority.

The formation of counter-cultures is a natural, oftentimes harmless process. But it is also one that drives Westerners to join the ranks of the Islamic State — a terrorist organization outlawed in Russia — and in this case, inspire them to seek service in Putin's military.

"Clearly, they [the Kremlin] are going for the fringes everywhere," said Peter Pomerantsev, an expert on Russian media and propaganda efforts. "Especially in the Anglo-Saxon countries, where there's never been a great love for Russia."

And the fringes are growing — as evidenced by the continued success of Trump and like-minded candidates in Europe.

"There has generally been an emasculation of Western culture [and] the White Man is quite a scared being," said Pomerantsev. "That's what Trump is all about. In an emasculated culture where the White Man sees himself to be under threat, I guess Putin is like the last white man standing."

But not every interested foreigner is a Trump supporter. Some — like Rachel, an 18-year-old girl from the American Midwest — just considered the opportunity a good way to take a stand against what they see as imperialist U.S. foreign policy.

Rachel turned her attention to Russia's foreign contractor program after striking out with the pro-Russian separatists fighting in eastern Ukraine. She explained that they turned her away "due to my gender and my intermediate level knowledge of the language."

"To me, Russia represented a bulwark against American globalist interests. So, I tried to join the [pro-Russian] rebels in a foolish attempt to fight against this too. But that went belly up. I looked into the Russian military after that … but I was ineligible for that too," Rachel said.

Rachel is a self-described idealist, who, during the course of the media frenzy surrounding events in Ukraine over the past two years, found herself increasingly sympathetic to the Russian cause, as she saw it, to counter U.S. hegemony.

"I saw my nation's interests, the United States, as malignant and immoral. I believed fervently that every nation has a right to self determination, and the United States seemed to ignore this belief of mine most flagrantly. Today, I find it ironic that I put the Kremlin on a pedestal for that reason," she said.

The Defense Ministry's comparable language requirements have not stemmed interest from those who don't even have intermediate Russian, at least anecdotally.

A former British Royal Air Force serviceman named Mark, who now resides in Australia, said that despite knowing just a handful of Russian phrases, he was "willing to take the oath [of service] for the Russian government and serve it well."

"President Putin is a man with a country that is not going to be bullied by the west or intimidated," Mark said. Though he sent his documents to the Defense Ministry, he has not heard back from them about his chances for recruitment.

A former U.S. soldier named Will, who served in the U.S. army for eight years, explained by email that he missed being a soldier. "I love my country, BUT, I am very upset by the path my government has taken," he said.

"Our founding fathers are rolling in their grave, I miss America and the values it ONCE stood for. The things [the U.S. government] makes our men and women fight for is not why our military was created. We were created for the American people. Putin is for the Russian people and his country, not for the rest of the world," he concluded.

Westerners are far from the only ones seeking to enlist.

"I come from a very poor family," said John from Gambia told The Moscow Times. "I am single and want to help get my parents out of poverty [but] I've been jobless since graduating from high school in 2010. I don't want to remain like this for the rest of my life … and the salary is quite a bit compared to jobs here."

Kristoffer, a 30-year-old Indian who was educated in his nation's military academies before serving in the Indian military, wrote that he wanted to know if he could join the Russian special forces after completing the 5-year foreign contractor stint.

Kristoffer stressed that he didn't feel joining the Russian military would be an act of treason or malice toward his own nation, since "India and Russia are best of friends in world politics and defense exchanges," referring to officer exchange programs between the two militaries.

Since Russia began considering allowing foreigners to apply for combat roles five years ago, an entire online community dedicated to foreigners hoping to join the Russian military has popped up — Russiadefense.net.

Though Russian military leadership may entertain foreigners in their ranks, ordinary conscripts might not. As one soldier on the social networking site VKontakte told The Moscow Times: "Foreigners have no place in the Russian army!"

President Vladimir Putin admitted for the first time to the presence of Russian military personnel in east Ukraine during his annual press conference on...
news

A court in Moscow has softened its stance on Russian army ground forces ex-deputy chief Vladimir Chirkin, and changed his corruption sentence from 5...
official census

Most of Russia’s 47 officially recognized small indigenous ethnic minority groups are shrinking in size, according to a report published by independent...