Local residents claim that during Soviet times, old U.S.-made sneakers could be found on this beach — washed ashore by strong oceanic streams. For struggling locals these shabby shoes were a valuable find.

Decades on from the days of men wearing these ragged — but American and therefore considered cool — running shoes on the streets of gloomy Petropavlovsk-Kamchatsky, the region's capital, Khalaktyrsky beach is experiencing a reincarnation. It is now home to local surfers who ride the waves not only in the warmth of summer, but in winter's freezing cold.

"Some years ago people here didn't care about the ocean — the beach was completely empty. You could meet young guys here who had lived their whole lives in Petropavlovsk, but had never even seen the ocean," says Anton Morozov, firebrand of the Kamchatka surfers and owner of the local Snowave snowboarding and surfing school.

Morozov, 33, admits that life in Kamchatka is expensive and there are multiple infrastructure problems, but surfing is his life and he will not be discouraged. Especially now that surfing in Kamchatka has grown increasingly popular and begun attracting tourists. 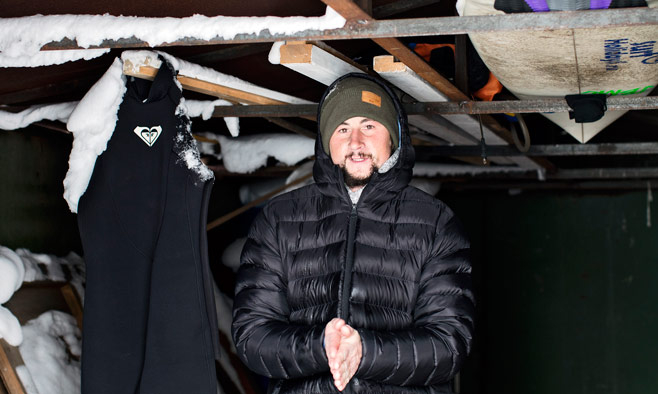 Anton Morozov tried winter surfing five years ago and fell in love with beauty of it.

Russians were surprised two years ago to discover that surfing was possible in one of the coldest parts of the country. The Surf in Siberia team — a collection of surfing enthusiasts from around Russia who make colorful films about their world travels — snagged the spotlight with its first film, which was devoted to Kamchatka and surfing during winter.

"Kamchatka is an incredible place," Konstantin Kokorev, Surf in Siberia's founder and director of the film, says in the video. "I've been here before several times — saw the ocean, the gulf, I saw ships sailing, but I had no idea you could surf here. People who live here have no clue they have world-class surfing opportunities!"

In addition to stunning landscapes, the 15-minute film depicts two surfers — Morozov and Kokorev, 34, — as they rush into the ocean right off the snow-covered shore.

"For me personally [winter surfing] is much brighter, if we talk about emotions. It's much more difficult and dangerous — and it's attractive because of that," Kokorev, a Muscovite with eight years of surfing experience, told The Moscow Times.

"After we released the film some two years ago [on the project website], we got lots of feedback and questions about it," Kokorev said. Both local and national media reported about the exotic sport back then, raising interest in it.

Since then, the overall number of tourists to Kamchatka had significantly increased, agreed Morozov. "People have been coming to see volcanoes, and the ocean, and I think we contributed to that a little," he said. 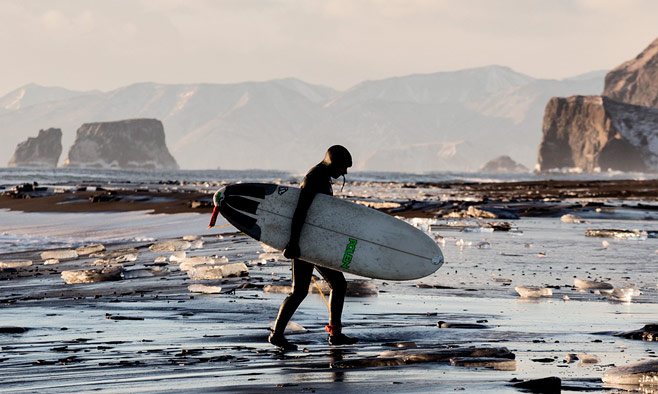 Surfing fanatics are not afraid of the bonechilling cold. In fact, surfers find that the water temperature is sometimes higher than that of the

air. However, this makes changing in and out of your diving suit difficult.

Morozov started surfing more than 10 years ago. "I'd always wanted to try, but back then there was nothing that would help me … All we could do was watch movies and documentaries and try to figure out how to surf," he recalled.

When he tried for the first time — in the summer — he used a borrowed wetsuit and an old surfboard his Moscow friend had left him.

"The suit was no good for surfing," Morozov says with a smile. "And we had no idea whatsoever how to do it — when to go to get nice waves, how far to swim. It took me months to learn all these things," he said.

Morozov and other enthusiasts gradually accumulated enough information and experience to enjoy their new hobby. Eventually, they thought to try surfing in the winter.

His first winter experience was excruciating without a surfing wetsuit, gloves and boots, suitable for the winter.

"Although I was wearing two pairs of [surfing] gloves, my hands quickly went numb in the water. I ran out of the ocean screaming in pain and was afraid I wouldn't be able to ever warm them again," Morozov said.

Despite the bone-chilling cold, he managed to appreciate the beautiful scenery and fell in love with winter surfing. "We went to the ocean in the morning, right before the sunrise. It was unbelievable — because of the low temperature the air was crystal clear, the sun was rising from the water, our black diving suits contrasting with the white snow," Morozov said.

This is his fifth surfing winter. Morozov and his fellow surfers now have the necessary gear and surf 3-4 times a week. "That feeling — when you struggle with yourself in cold water, and at some point the struggle ceases and leaves pure joy in its place — is special for me," he added. 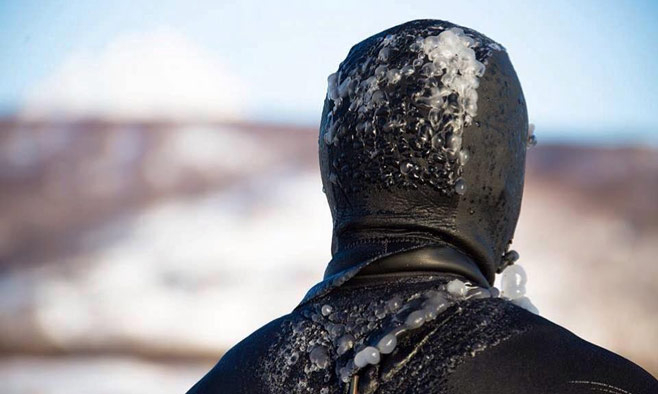 His friend Lyudmila Tanachyova, 28, loves to surf, but finds the cold a particular challenge — she surfs in the winter out of necessity. "Here in Kamchatka we have only three months of summer, and if you take a break for the other nine months, the next summer you will have to learn things from the start all over again," she said.

Tanachyova, a rock-climbing instructor, has been surfing for just two years and first tried riding the waves in the snow last winter. "I caught the wave and started falling, imagining the moment I would go underwater and thinking 'Oh my God, here comes hell,'" she recalls of her first experience.

Initially Tanachyova had to prepare herself psychologically two days in advance of entering the water, but within months she acclimated. "If you have the right equipment — a warm wetsuit is paramount — there will be no problems at all," she said.

The most important thing, she says, is to notice when you begin to freeze in the water and get out. During winter, the water measures 2 degrees Celsius on average, with an average air temperature of minus 15 degrees Celsius.

Both she and Morozov agree that their greatest obstacle in winter is not the cold but the lack of infrastructure. When snow buries the road to the beach, one can only reach it with a snowmobile, and a small beach-hut provides insufficient protection from the elements. "It's pure torture to put on a diving suit in the cold," Tanachyova said.

Yet, this surfer girl perseveres no matter the season. "[Surfing] is a constant struggle with yourself. But the feeling you get when you slide down the wave is worth it," she said. 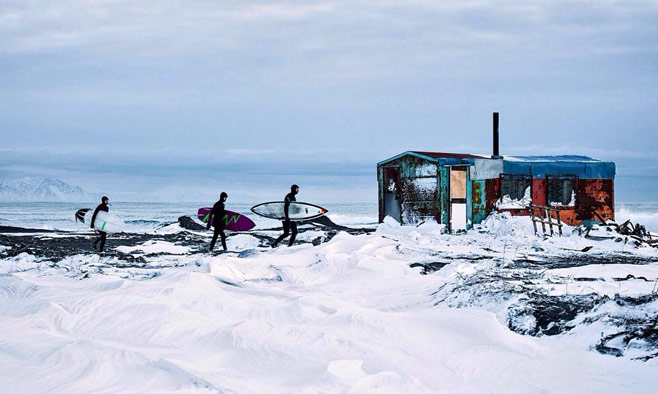 In his Snowave school Morozov teaches people of all ages to snowboard in the winter and to surf in the summer, when the Khalaktyrsky beach transforms into a camp with tents and food cooking over open fires.

His students have expressed an interest in winter surfing, and he hopes to establish a year-round camp of surfing enthusiasts.

The summer camp, according to Morozov, attract tourists from all over the world. A lesson, lasting 2-3 hours, costs 2,500 rubles ($32) in the summer and 3,000 rubles ($38) in the winter. The price includes surfboard and wetsuit rental.

Morozov claims that you can easily learn to stand on the board in the water during the first lesson. "It's not that hard, … The most interesting stuff starts on the next level — when you're eager to improve your skills," he said.

The first summer he launched Snowave he had 20 students, but that number has multiplied. "Some of them are five or seven years old," Morozov says proudly. "When parents see their children in the ocean, surfing, it impresses them deeply," he adds.

Despite his love of winter surfing, Morozov recommends that beginners steer clear during cold months. "Surfing in general is a difficult sport, and in winter it's twice [as hard]," he said.

A request for comment on whether surfers contribute to boosting tourism in the region, sent by The Moscow Times to the Kamchatka government, went unanswered by the time this article went to press.

According to Morozov, the regional government supports the Snowave school through grants. "We bought our first diving suits for kids with government money and are waiting for a piece of land to be allocated to us on the beach," he said.

As for the difficulty of access to wetsuits, boards and other equipment — the problem was solved in 2014 when Quiksilver, the famous surfing and snowboarding brand, opened a franchise store in Petropavlovsk-Kamchatsky.

Sergei Rasshivayev, a professional surfer and head of the Russian Surfing Federation also believes that winter surfing is the most attractive and interesting direction the sport has taken.

"It's a great way of challenging yourself, of experiencing completely different emotions. Surfing among palm trees is not intriguing anyone these days — surfing against a background of volcanoes and glaciers is," he told The Moscow Times.

He has been to Kamchatka several times to surf, and says he would love to return and relive the experience. "When I first came there, the beauty of this place literally took my breath away," Rasshivayev said.

Rasshivayev — who founded Surfholidays, a worldwide network of surf schools — believes Kamchatka shows promise despite its need for infrastructure modernization and its remote location that results in pricy plane tickets. "I think there is potential, and it's quite significant. Kamchatka needs modernization, that's true, but it's not completely shabby either," he said.

Morozov says "potential" does not even begin to cover it. "I study many things about surfing — climate, landscapes, weather conditions, winds, streams, and I'm positive there are many amazing places for surfing in Kamchatka that simply have not yet been discovered. But at some point we will," he said.

What do you do if it's cold outside? You stay indoors, have a hot shower or maybe even a nice long bath. Unless you're Russian, of course.
news

Russian Athletics: Kicked Out for Being a Bad Sport

This year Russia was caught in the biggest doping scandal in the history of athletics.
Further-reaching impact

The EU insurance and reinsurance ban comes as Moscow seeks to ramp up sales to China and India to help offset the embargo.
Active efforts

"We are trying to build relations with the political forces that control the situation," Putin said during a visit to Tajikistan.