More than 350,000 people were convicted in Russia during the first half of 2015, according to Supreme Court data. Of those many thousands, only about 1,500 people were acquitted, and charges against about 6,000 people were dropped, statistics show.

The Moscow Times reviewed the most high-profile court cases and rulings of the year.

Prison Term for a Protest

Status: Convicted to 3 years in prison in December 2015

The first ever prison term for violating protest laws was handed out at the end of the year to Moscow activist Ildar Dadin, who conducted several single-person pickets throughout the year. Violating these laws is usually punishable by an administrative fine or a suspended sentence. The young man was sentenced to three years at a penal colony for "repeatedly" breaking Russian protest laws, despite the prosecution calling for a two-year sentence.

Dadin had previously faced 10 years in prison after allegedly striking a policeman who detained him and other activists walking along Moscow's Arbat Street with a banner reading: "Hitler also went after gays first. Say no to fascism in Russia," in October 2013. 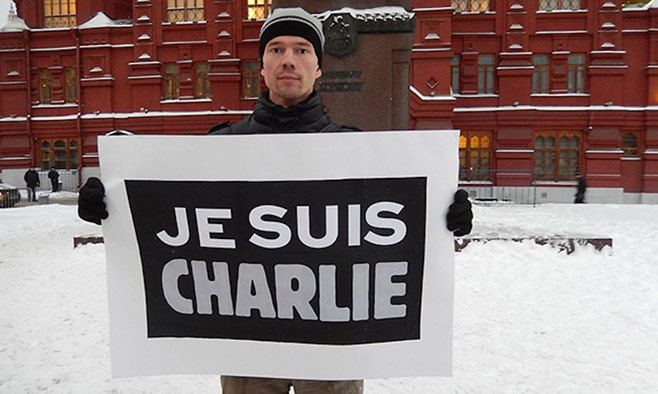 Ildar Dadin's case marked the first ever felony sentence for taking part in protest rallies.  A few days later, a second activist, Vladimir Ionov, was tried on the same charge, but he fled to Ukraine.

In July of the same year, he was detained after protesting against Russia's "gay propaganda" laws, reportedly introduced to protect minors, in front of the Central Children's Library in Moscow.

By the time of publication he was the third person to be convicted for "repeated breaches of laws regulating the organization and conduct of gatherings, rallies, demonstrations, marches and pickets" since it was made a criminal offense in July 2014, but the first person to receive a prison term.

Another activist, Alexander Kolchenko, 26, stood trial alongside Sentsov, accused of carrying out terrorist attacks in Crimea as a member of the organization Sentsov allegedly headed.

Both Sentsov and Kolchenko were tried in a military court in Rostov-on-Don. During the trial Sentsov claimed he was tortured while in custody, but his complaints were dismissed by the prosecution. 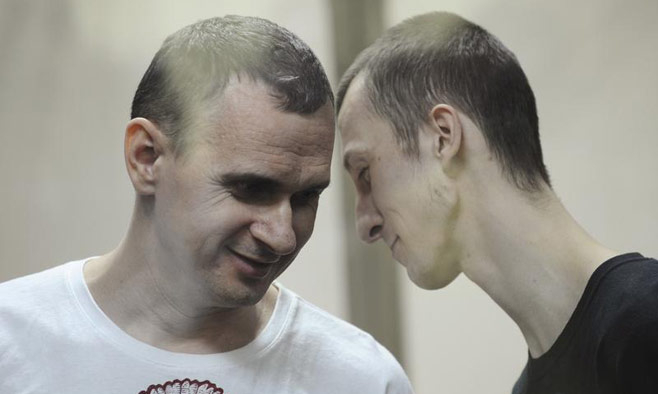 Some of the most prominent figures of the international art scene voiced their support for Oleg Sentsov and Alexander Kolchenko, but it didn't produce any results.

No pleas to release the activists produced any results. In August Sentsov and Kolchenko were sentenced to 20 and 10 years in prison respectively. After the sentences were announced, both sang the Ukrainian anthem.

In November, flamboyant artist Pyotr Pavlensky set the front door of the headquarters of Russia's Federal Security Service on fire. He was arrested and accused of vandalism, which carries a sentence of only three years behind bars. In court Pavlensky demanded to be charged with terrorism, comparing himself and his deed to Sentsov and Kolchenko.

Fastest Parole for a Corrupt Millionaire

On the same day Sentsov and Kolchenko were sentenced to lengthy prison terms, Yevgenia Vasilyeva — former Defense Ministry property manager convicted to five years in prison for mass embezzlement in May — got her parole approved after spending just a month in a penal colony, four days after her sentence officially came into  force.

The move sparked outrage among human rights advocates and ordinary Russians. Vasilyeva, 36, was reported to  be romantically involved with former Defense Minister Anatoly Serdyukov, who was also investigated for  misusing army funds, but later amnestied.

She became the anti-hero of the most high profile anti-corruption case of the decade, fueling speculation that her ties to Serdyukov and overall wealth bought her preferential treatment by law enforcement.

During the investigation and trial, Vasilyeva was kept under house arrest in her luxurious apartment in the center of Moscow. During that time she was allowed to leave her home for several hours a day, time she often spent shopping for designer clothes and jewelry, according to media reports.

She made headlines again in July, when media reported that a woman resembling her was seen walking into a bank in the upscale Patriarch's Ponds area of central Moscow, while she was supposedly serving her sentence in a penal colony.

Only two weeks later Russia's Federal Prison Service stated Vasilyeva was in a colony in the Vladimir region. Officials claimed she was kept in the same conditions as all other convicts and even had a job as a janitor in a local school.

Murderer in Russia, Martyr in Ukraine

The case of Nadezhda Savchenko, a 34-year-old Ukrainian military pilot, is expected to be end in a conviction by the end of the year — Russian authorities have already hinted the sentence will be "tough."

According to the prosecution, Savchenko was spotting for a Ukrainian mortar crew that allegedly killed two Russian journalists in war-torn eastern Ukraine. She was arrested after illegally crossing the Russian border, the investigation alleged. Savchenko maintains she was kidnapped on Ukrainian territory by separatist rebels, forcibly brought to Russia and handed over to the authorities. 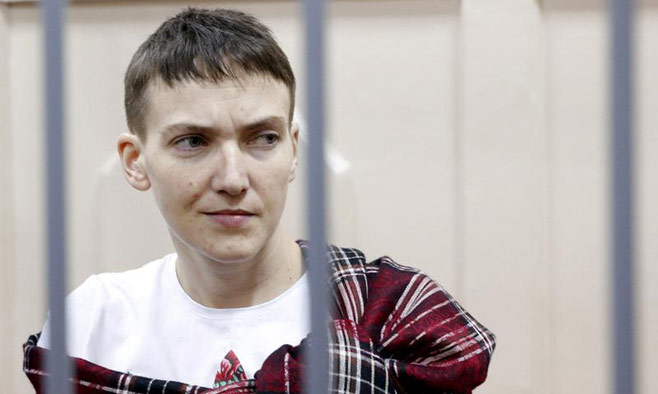 President Vladimir Putin didn't deny exchanging Savchenko for Russians convicted in Ukraine was a possibility, but noted that any such exchange should be fair and mutual.

While in custody, Savchenko spent 83 days on a hunger strike. She denies all the charges. Currently the pilot is on trial in the Russian city of Donetsk, and the verdict may be reached by the end of the year, resulting in a "tough" sentence, Russia's Investigative Committee spokesman Vladimir Markin said earlier this month, according to media reports.

Savchenko's lawyers say they will not appeal the sentence handed out by a Russian court, because doing so would create a false impression that she has any trust in Russia's judiciary system. Instead, the defense hopes that Western nations — whose governments and activists have been urging Moscow to release Savchenko — will respond with additional sanctions and pressure on Russia, her lawyer Ilya Novikov said.

Another hope of the defense is that Savchenko will be exchanged for Russians convicted in Ukraine and transferred back to Ukraine.

The case of Svetlana Davydova, 37, accused of high treason, elicited the loudest public outcry this year.

The mother of seven children, including a two-month-old girl, Davydova was arrested in January after making a phone call to the Ukrainian Embassy in Moscow in April 2014 to report that Russian troops stationed near her home in the town of Vyazma in the western Smolensk region had left their barracks and could be on their way to fight in Ukraine.

Soon after, she was charged with treason and — upon the advice of her court-appointed lawyer — confessed to the crime to get a lighter sentence. The case, coming in the wake of worsening relations between Russia and Ukraine, quickly gripped the public imagination. More than 40,000 people signed a petition supporting Davydova that was submitted to the Kremlin.

Ivan Pavlov, a prominent lawyer specializing in treason cases, took the case together with several other lawyers, and Davydova withdrew her confession. On Feb. 2 she was released with a written agreement not to leave her place of residence. Two weeks later the Moscow City Court declared her arrest unlawful. On March 16 the charges against Davydova were officially dropped.

14 Years in Prison for a Job Application

Status: Sentenced to 14 years in September 2015

In September, another treason conviction resonated in Russian society. Gennady Kravtsov, a former engineer specializing in satellites who worked for Russia's GRU military intelligence agency between 1990 and 2005, was arrested after he sent a job application letter to a Swedish defense company in 2010. By sending this letter, the prosecution claimed, he revealed information that was considered a state secret.

Kravtsov repeatedly denied his guilt, as did his wife, who insisted the scientist wanted simply to get a job where his talents would be appreciated. "He is a scientist and he is not equipped for daily life," she said in an interview with The Moscow Times earlier this year. "He is not capable of falsehood or treachery … he would never have done anything against his country."

The trial went on behind closed doors, and, as Kravtsov's lawyers Ivan Pavlov and Yevgeny Smirnov said later, the defense wasn't given any opportunity to argue its case. The scientist was convicted to 14 years in prison, which was one year less than prosecutors asked for. The judge said he had taken into account the fact that Kravtsov had two young children aged 4 and 8 when determining the sentence. Kravtsov's lawyers plan to appeal the ruling.

Moscow student Varvara Karaulova, 19, was thrown into the spotlight after her unsuccessful attempt to join the Islamic State (banned in Russia) in Syria earlier this year.

Karaulova, a student at Moscow State University, took an interest in Arabic culture, Islam and studied the Arabic language. After she went missing in May, her parents found out she had worn a hijab to university and had an online relationship with a man who turned out to be a recruiter for the terrorist group.

The young girl was detained on the Turkish border and brought back to Moscow. In July, the Investigative Committee claimed it didn't plan to open a criminal case against her. 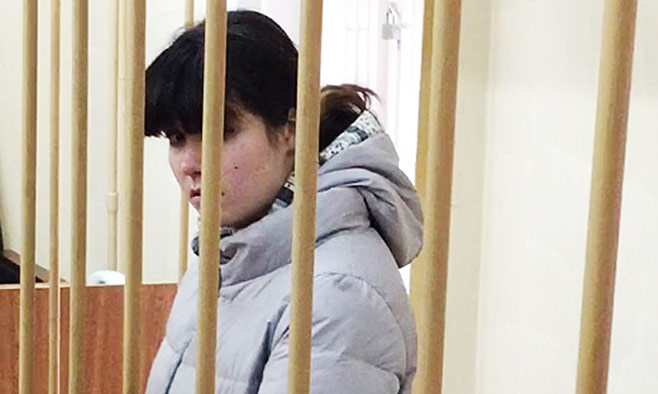 Karaulova's lawyers confirm she was in touch with an IS member but it was approved by the special security services and went on under their strict supervision.

But in October she was suddenly arrested and put in pretrial detention on suspicion of attempting to join IS. She is also suspected of recruiting Russians to join the militant group. According to the investigation, she was still in touch with a member of the group and planned to buy a fake passport.

In several interviews, Karaulova's mother confirmed that and said that her daughter was undergoing rehabilitation and did not plan to take another attempt at joining the group.

Karaulova faces up to 10 years in prison if convicted. She pled guilty, but then fired her lawyers.

Captured Ukrainian Pilot Savchenko to Go Back on Hunger Strike

Captured Ukrainian pilot Nadezhda Savchenko, who went on trial in southern Russia's Rostov region on Sep. 22, has pledged to go on hunger strike, her lawyers...
news

The military division of the Russian Supreme Court has upheld the verdict against Ukrainian filmmaker Oleg Sentsov and his associate Alexander Kolchenko...
opinion

Russia in 2015: Eternal Winter In a Solitary Cell (Op-Ed)

Microsoft halted new sales in Russia and is significantly scaling down operations there due to the war in Ukraine.