Expat Dan Madden has turned his passion into a new profession with the help of a Russian friend.

Moscow's craft beer scene is exploding. In just over a year, the city's handful of joints specializing in artisan ales have multiplied to some 40 to 50 locations, and local brewers are so far behind demand that craft beer bars are importing from abroad.

See the Photo Gallery: What's That You're Drinking? Craft Beer Made in Moscow

In the midst of this explosion is Dan Madden, a reformed plastic resin salesman from Los Angeles who reinvented himself as a craft beer guru after dropping everything and moving to Moscow in 2008.

"I got divorced, and didn't have any kids. After 20 years of driving in Los Angeles I wanted to live in a city where I could just take the metro everywhere, and I always liked Moscow," said Madden.

Seven years later, the 49-year-old Madden speaks fluent Russian and has a Russian wife and a child. Uninspired by the plastic resin business, Madden was looking for a more interesting and rewarding career.

The inspiration to brew craft beer struck him two years ago in a pub during a visa run to Dublin.

"The bartender told me about a big exhibition at the ­expo center about craft beer. So I went over there, and got enthus­ed about it … I always liked beer, and being an American I knew a lot about craft beer already," he said.

Madden returned to Moscow with renewed purpose. "I studied my butt off. First I read [about brewing craft beer], and then I read some more," he said, "and then I went to the Internet to find craft brewers here in Moscow."

The timing was serendipitous. While Madden hit the books, a challenge to Moscow's mainstream bar scene — notorious for expensive cocktails, generic beers, and frustrating face control — began to rise in the city's back alleys and corner venues.

Though it has been possible to find craft beer in Moscow for several years, they were few and far between. In the last year, the city has seen an astonishing explosion of bars and restaurants selling craft beer.

According to a website maintained by a group of ­Russian craft beer enthusiasts calling themselves the "First Beer Club," there are nearly 60 locations specializing in local micro-­brews in Moscow alone. Similar movements can be found in other major cities like St. Petersburg and Yekaterinburg.

In Moscow, one of the major craft breweries is Stamm Beer, founded in 2011 by a young Russian entrepreneur, Andrei Ivanov.

Four years on, the 36-year-old Ivanov's line of Stamm Beers can be found in many of Moscow's craft bars. 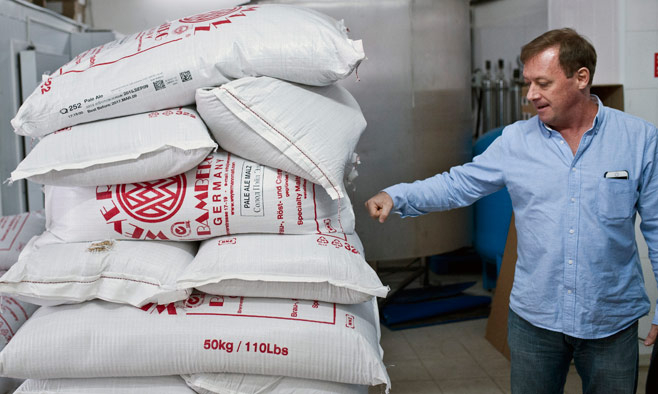 While giving a tour of his brewery, located about 20 kilometers outside Moscow's MKAD ring road and decked out with state-of-the-art brewing equipment imported largely from Hungary, Ivanov described the Russian craft movement as so­mething of a repeat of the American movement in the 1980s.

The craft movement in America is generally credited with being pioneered by Ken Grossman and Paul Camusi, two home-brewers from California who founded Sierra Nevada, today a household brand.

The American craft focus, as explained by Ivanov, is on hop-heavy beers such as India Pale Ales (IPAs) and double IPAs. With no strong brewing tradition of their own to call on, Russian craft brewers have largely followed this style, Ivanov said.

But the Russian craft scene has also called on Belgian- and German-style yeast-driven beers, he said. "In those beers," Ivanov explained, "ingredients like malts and hops are important, but the flavor is driven by the yeast. In most American beers, the yeast is essentially flavorless.

"At Stamm, we make a lot of beers based on that yeast-driven flavor profile, and then American hop-driven beers like Red River and El Dorado," he added.

Stamm has seen nearly 250 percent growth in production output since its founding in 2011 — a growth rate driven by a level of demand the brewer never could have dreamed of. Taken as a whole, craft brewers are now putting out 300,000 liters a year in Russia, Ivanov said.

Madden and Ivanov would eventually cross paths in 2014, but first the would-be American craft brewer had to come up with a game plan to enter the scene.

In 2013, Madden visited Boston with his Russian friend, a surgeon named Alexander Ivanov (no relation to Andrei). The two were sitting in a bar, marveling at the variety of beers, and Ivanov, known to his friends as "Dok," lamented the lack of variety in Russia.

The two resolved to found a beer company in Russia. They incorporated in Moscow in November 2014 under the name Dok-n-Dan Beer Brewing Company.

Madden explained that he is responsible for most of the brewing and management legwork, while Dok is something of the company's mascot. The surgeon specializes in removing vascular tumors from Russian children, and Madden and Dok have pledged to donate a portion of their proceeds to charities that fund the surgeries. 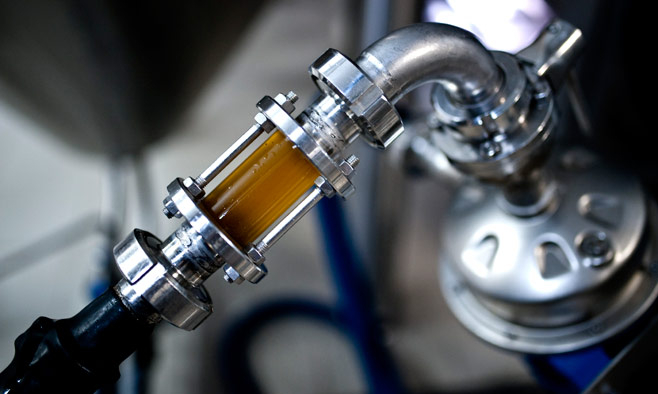 Unfiltered beer passing through a filter to remove sediment and produce a clear beer.

Madden's search for a local brewer who might rent him a brewing tank led him to Ivanov's Stamm Beer. He cold called the Russian to propose a partnership.

"It was actually pretty funny. I called his secretary and she was like, 'Who are you? Just some American guy? I'm not sure he is going to want to talk to you.' But he came to the phone, we started talking, and he was into it," he said.

Ivanov allowed Madden to rent out a tank, and Dok-n-Dan set to work on its "first and flagship beer," known as Rockefeller Elite Cream Bock Ale, which Madden described as "my own recipe and a mix of different beer styles, including U.S. Cream Ale and German Maibock."

After several unsuccessful small batch experiments, the first 2,000-liter batch of Rockefeller was finally brewed in March this year.

Rockefeller is being marketed as a high-end craft beer, ­selling at about 500 to 600 rubles ($8-10) per half-liter. Dok-n-Dan is now brewing cheaper beers, such as an American-style Witbier known as White Gold, "and we plan to brew both a dry stout and a session IPA this winter," said Madden.

Madden is already selling his company's beers in the city's bars. Though things are going well, the American said he has to constantly visit locations where his beers are sold to make sure competitors have not sabotaged his equipment — a real threat that resulted in his beers at one bar going flat.

Though still in the early stages, Madden has big plans for his company.

"I see myself in one year owning my own brewery, with Ivanov's help and the help of the whole team," Madden said. "I already have distributors onboard, and everyone's excited about it."

Madden's partnership with Stamm Beer will likely factor heavily into his ability to succeed in establishing his own brewery, since Stamm has nearly five years of experience in brewing. But Madden has also been valuable to his Russian comrades as an information middle man. 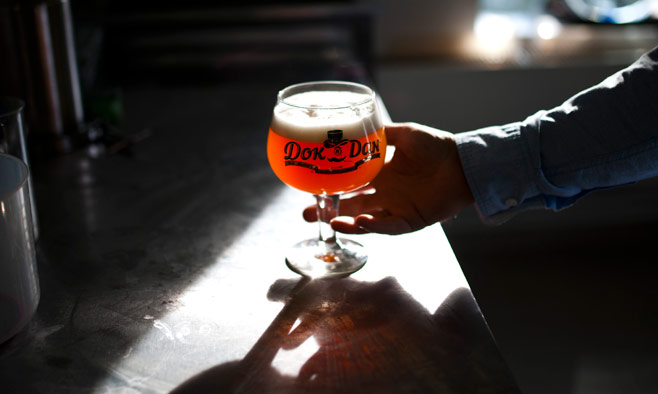 Madden showing off his new high-end Rockefeller craft beer, which sells for around 600 rubles ($9.60) a glass.

"The biggest advantage for me, because I just started this two years ago, is the English language," said Madden. "For those guys, it's a lot more difficult to learn about craft and ­related things."

For an English-speaking brewer, there is a wealth of knowledge stored online from the American movement made available through YouTube videos, books, webinars, and even subscription services to online craft brewing courses.

Madden has done his best to pass lessons along to his Russian friends as a token of gratitude for allowing him to rent a tank at Stamm — which Ivanov said can't keep up with demand for its own beers.

"I've been able to help them out in return by even ­bringing back certain yeast strains from the U.S. that he might not have access to, like liquid yeasts," said Madden.

With no domestic industry growing quality hops and yeast strains, Russian craft brewers like Stamm rely heavily on imports from places like the U.S., Germany and Belgium, and a craft brewer in St. Petersburg has set up an import business for these essentials.

To Americans unfamiliar with the origins of craft beer in the United States, it might come as a surprise to know that a familiar national brand such as Sierra Nevada was once a scrappy upstart that shook an industry monopolized by large producers.

That kind of market penetration is still a long way off for Russia's nascent but rapidly growing craft beer movement. Sitting in a bar built out in front of Ivanov's Stamm Brewery, the Russian and American craft brewers had differing opinions of where all this is going.

Stamm Beer can't meet the demand for craft beer. Despite this, Ivanov believes there is a limit to how far the movement can go, citing the Russian consumer's relative lack of taste for good beer and focus on price.

But in his U.S. colleague's view, this is just the beginning: The market for craft beer is already growing faster than it did in the U.S. in 1981 and 1982.

Where to Go for Craft Beer in Moscow

Located down in alley off of Pushkin Square, Beer Market is an older craft bar. In addition to a selection of local craft beer on tap, Beer Market sells an expansive variety of bottled beers. Prices are cheap, but the place is often crowded.

This craft venue recently opened a second location at Chistiye Prudy in addition to its original location near the Novo­kuz­nets­ka­ya and Tretyakovskaya metro stations. The new location features a minimalist interior decor, with quick service across a long bar. Spacious, but not a lot of sitting room. Mostly a stand-up bar.

Located across from 35MM cinema, Bottle, Mug and Kettle opened its doors earlier this year, and is a great location to try out up-and-coming craft beers  — though they still sell staples of the scene such as those brewed by Jaws. Like GlavPivMag, the interior is relatively minimalist, but there is ample seating and space.

There is perhaps no better embodiment of the craft beer movement than Krapiva, which has replaced Ogonyok, a charmless, now-closed cocktail bar on Potapovskiy Pereulok. Perhaps Moscow entrepreneurs have realized that overpriced drinks in loud and dark places do not draw the crowds that they used to.

Traditional British cask beer will hit the pubs of Moscow by the barrel load as part of the capital's first ever British Beer Festival, taking place...
news

Russia's beer market dropped by 9 percent in the first three months of this year compared to the same period last year, according to a report issued...
Home Front