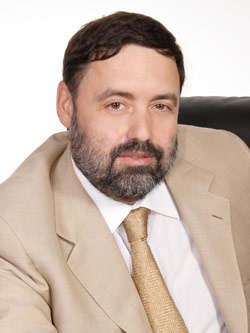 Your company is one of the largest developers in Russia. KORTROS is considered one of the most reliable regional developers among those that have survived numerous crises. What, in your opinion, is the secret of the company's success in the development market in Russia?

The company has never assumed unnecessary risks, including currency risks, and has always weighed potential sales volumes against the pace of development. We have a balanced portfolio in the land bank.

Finally, the most important point is that the company develops mainly long-term projects, projects involving the integrated development of a whole land plot. And this product involves a significant period for implementation. In this way it is possible, having received the site, designed it properly, set up communications and so on, to regulate the pace of development, to tailor it to the needs of the market, the social environment, the communication environment. Therefore, by reducing the pace of development in these projects by one or two years, we do not lose the project and don't end up in a situation that is fraught with negative repercussions for the Company.

The market in real estate development develops in cycles and no one knows at what point it will reach its peak. To smooth this effect you need pretty long-term projects and that is what we do.

People are now talking about a fall in demand for residential real estate for the majority of developers of around 40 percent. How do you assess the situation on the market? What predictions can you give in the short and medium term? And, on this basis, what strategy have you chosen for your company this year?

As for the fall in demand: a 40 percent drop is not characteristic of all Russian cities. In certain areas, yes, there is such a decline, but with regard to Moscow, the Moscow region and even in Yekaterinburg, there is no such effect, just as in Krasnodar, Rostov, St. Petersburg and a series of other big cities.

Another issue is that we have to predict what decline there will be next year, because developers now are extremely cautious about entering into new projects, if not to say that many have slowed down the pace of entering into them. We intend to continue building and have not stopped work on a single site to-date. As regards the pace of development itself and supply to the market of this or that volume of housing, I would say that we stay in sync with the market and here, too, we have the possibility of adjusting. In particular, in Yekaterinburg we are selling mainly pre-fab housing, so we can vary the volume of this construction backlog up or down. And in the event of unpredictable market behaviour, to go on sale DDU, knowing that the reputation of the company and its financial airbag does not give rise to our clients, our consumers are not afraid of unfinished projects. We never have and, I'm sure, never will deceive investors.

We're entering into a number of interesting projects this year. For example, this project of the 179th district in Perm, is a totally unique large-scale project of integrated development, which shares the main characteristics of our projects, such as environmental friendliness and energy-efficient technologies.

For our project in St. Petersburg, "Peter's Island", we have received the building permit. This project is also in the active stage of development. Our projects in the Moscow region, Yaroslavl, Yekaterinburg continue to develop dynamically.

In your opinion, how does the current crisis differ from the crisis of 2008? What real consequences await developers from an atmosphere of declining GDP growth and international isolation?

The difference from the 2008 crisis is that that crisis was undoubtedly short, whereas now we have entered into what is evidently a relatively long period of market stagnation.

The second point difference is that, after all the experience they had in the 2008 crisis, the government adopted a series of timely measures, above all the timely reduction in mortgage rates, which allowed the market to hold together, because in Russia housing sales are closely linked, especially in the economy class segment, to mortgage lending. And now we are talking about a further reduction in interest rates.

The third difference is that there are bigger players operating on the market now than back in 2008, and there is not the same devil-may-care attitude to debt financing. I think that there are few companies in the real estate sector who are sitting on foreign currency loans today and are heavily dependent on exchange rate fluctuations. Also, I do not think that there is such an inflated bubble linked to excess supply in the market, and when it comes to the economy class segment, the state is actively supporting the particular categories of citizens that determine consumer demand.

Finally, to address the part of the question linked to international isolation, it is simply a macroeconomic effect, which is understandable: the lower that living standards are, the harder it is for a consumer to buy real estate. But on the other hand, after food, accommodation is still the primary need of every family, and so I believe that this market is relatively stable. Volumes can decline for some period of time, but the market cannot die out completely, and it cannot fall sharply either. Even from the point of view of the social responsibilities of the state and the behavior of the state in such times that our country is experiencing, I think the market looks quite secure.

Finally, regarding import substitution, the volume of imported goods and materials in construction does not exceed 15-20 percent, so here too it is hardly like something critical is happening.

A lot has already been said about the development of PPPs in Russia. What do you as a representative of business with extensive experience in the public sector think about adopting a federal law on PPPs?

We expected that construction would be among the sectors to which the law on PPPs would extend. But it turned out differently. Everyone understands that the construction sector is an engine of the economy in the sense that it is linked to so many industries and has a decisive influence on employment and taxation.

But the PPP law forgot about us, despite the fact that this issue has been discussed with the relevant ministry several times and had been supported by the Government.

I think that this is a huge problem, because no major project in the field of development today is possible without state support. And as soon as we do not define the rules of the game in this sector, we run the risk that we do not implement advanced technologies and methodologies in the sector, and that we do not define the way in which we are protected against risks from the state in this area. We do not get large integrated development projects, because they are designed to be implemented over a long period and require infrastructure cooperation with the state in any case. This applies to social services, roads, infrastructure and migration flows. This has a profound effect on macro-economic processes in the state. And so I really hope that at the very least amendments will be made to change the law in the right direction.

In 2015, you mark 10 years since becoming president of the company. How, in your opinion, should the head of a large real estate development business focus his strategy on managing his team during a crisis? What non-financial motivation tools are used in your company?

Firstly, the very stability of the company is always an extra motivation for any person working in it. When a company is not exposed to volatility, hysteria and the like, working for it becomes easy and prestigious, calm and promising.

There is a whole set of motivational tools that can be used that are not related to financial compensation. Here I'd note the publication of corporate newspapers, rewarding the best employees with special recognition, holding sports tournaments and competitions. In the company we have different ways to boost your qualifications. For example, recently in Sochi, where we built the largest hotel in Europe, we held a corporate training session, and this is also an incentive to look into the future with optimism, to have the ability to both work and relax, being an employee of one of the best companies in the country.

Finally, the company implements unique projects, and that means it helps employees to acquire unique skills. It develops market leaders.

Moscow has repeatedly accused Ukrainian forces of carrying out strikes on its soil since the start of the war, particularly in the Belgorod region.
focus on kherson

Three warplanes equipped with hypersonic missiles will be on "round-the-clock combat duty."