A family of Iraqi-Syrian asylum seekers has been stuck in Moscow's Sheremetyevo Airport for nearly three weeks after Russian border guards confiscated their passports on suspicion they were fake.

Human rights activists say as asylum seekers fleeing violence at home, the family should be allowed into Russia regardless of any doubt over their travel documents.

Hasan Abdo Ahmad, a Syrian Kurd, his wife Gulistan Shaho and their four children aged 3 to 13 stepped off the plane from Istanbul into the airport on Sept. 10.

A Russian border guard promptly took away their passports, saying they might be fake, Shaho and the family lawyer, Roza Akhmedova, told The Moscow Times.

The Federal Security Service (FSB) then opened a criminal investigation into the family for attempting to cross the border illegally, and the family has been living in airport custody facilities ever since.

Last Thursday, a court in the Moscow region town of Khimki agreed to release the family on bail of 50,000 rubles ($800) per person, said Akhmedova. Shaho's sister Tamara — a Russian citizen — paid the money.

But as of Monday evening, the family was still stuck in the airport's transit zone. If they step outside of it, it will constitute an illegal crossing of the border, a crime punishable by up to six years in prison if committed deliberately by a group.

The family is waiting for a visit from Federal Migration Service officials, after which they hope the criminal investigation against them will be closed, meaning they can leave the airport.

They are currently surviving on pre-cooked food passed from the outside by Shaho 's sister, as the transit zone restaurants are too expensive, Shaho told The Moscow Times by phone on Monday. They sleep on chairs or on the floor, she said.

"I wanted to go to the parenting room with my small daughter, but they would not let me in because I did not have my passport and boarding card. The border guards took our passports," she said.

Shaho said that the family lived in the city of Erbil, the capital of Iraqi Kurdistan. Her husband worked in a printing house there, while Shaho herself — a native of Kazakhstan who married Ahmad in 2002 — stayed at home to look after their three sons and daughter. Ahmad and Shaho each hold both Syrian and Iraqi citizenship, she said.

Erbil and the surrounding area is now on the front line of the conflict with the Islamic State, which has repeatedly sent suicide bombers to the city in recent months.

"When the terrorists came we were really scared. My children were too afraid to go to school and for almost a year they stayed at home with me," said Shaho.

The family decided to flee to Russia.

"Four of us had Iraqi passports, but two of the children didn't have a passport," said Shaho. Iraqi officials told them that they were not issuing new passports at that time, she said, and so the family applied for and obtained Syrian passports instead.

The family then obtained Russian visas from the Russian Consulate in Iraq, crossed the border into Turkey and boarded a plane to Moscow in Istanbul.

"If our passports were fake, how could we cross borders?" said Shaho.

The FSB has not issued any comments on the case. 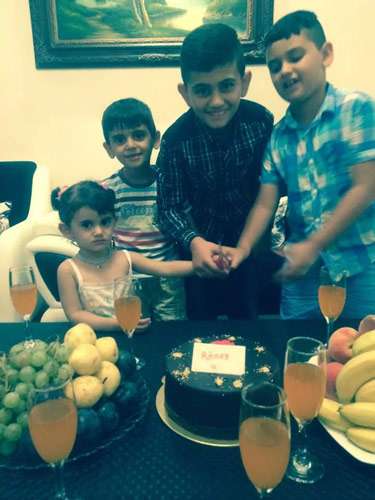 Ahmad worked in a printing house there, while his wife Shaho stayed at home to look after their three sons and daughter.

Now the ball is with the migration authorities, said Akhmedova, the lawyer.

The lawyer said that when an FMS officer eventually comes to the airport to meet with the Ahmads, she will demand that the FSB closes the case against the family on the grounds that they have officially applied for asylum in Russia, rendering the issue of their documents irrelevant. In theory, she said, this will allow them to cross the border into Russia.

"But the FMS people don't come. And I am not sure if the FSB will listen to them," said Akhmedova.

A request for comment sent to the FMS federal headquarters went unanswered by the time of publication.

The family should be allowed to cross into Russia regardless of their status of their travel documents, Svetlana Gannushkina, head of the Civil Assistance Committee, an NGO that helps migrants, told The Moscow Times on Monday.

According to the UN convention on refugees, asylum seekers who cannot return to their home country because of threats to their lives there cannot be prosecuted even if they cross borders illegally, she said.

Gannushkina suggested that the low level of Russian officials' professional qualifications and poor knowledge of international laws are to blame for the family's trials and tribulations.

Akhmedova, the lawyer, said that reality does not resemble the law.

Last week, she said, she attended a court hearing in Moscow where a young Syrian refugee seeker accused of illegally crossing the Russian border was fined 10,000 rubles ($150). After the trial he decided not to wait for asylum status here and left Russia.

"An FMS officer told the judge there that it is quiet in Syria now and the man can go home. But the man is from Aleppo! [Syria's largest city that has been devastated by the civil war.] How it can be quiet there?" she said.

Shaho said she will not return home and doesn't plan to go anywhere else.

"I came here for the sake of my children and I will stay," she said, adding that she and her sister Tamara plan to open a small shop in the southern city of Samara where the latter lives with her husband.

A total of 912 refugees from Syria asked for temporary asylum or refugee status in Russia in January-August this year, the Izvestia newspaper reported last week, citing the FMS.

That statistic does not reflect the real numbers of people who are fleeing to Russia from the conflict in the Middle East, Yelena Burtina, deputy head of the Civil Assistance Committee, told The Moscow Times.

The official statistics only comprise people who managed to get registered in the system after a cumbersome procedure — a feat that many newcomers fail to achieve, she said.