Launched under the leadership of then-President Dmitry Medvedev in 2011, the Skolkovo Institute of Science and Technology (Skoltech) was intended to be a beacon of hope for Russia’s scientific community. The idea was to create a new university in Russia to attract domestic and foreign talent into the fields of science and technology and serve as an engine for the country’s economic modernization.

Skoltech’s president is U.S. aerospace engineer Edward Crawley, a professor at the Massachusetts Institute of Technology who has been actively involved in education entrepreneurship and, in his capacity as an expert in the field of aerospace and spaceflight, was a senior adviser on several NASA advisory committees.

The Moscow Times sat down with Professor Crawley to talk about the project and his involvement in it. 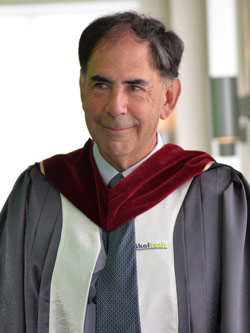 Q: Why are you leading this project, and what skills did you bring to the table?

A: I think there are three aspects of why I came to Russia. One is that I was very interested in Russia. I’ve been coming here since I was an undergraduate student, I studied in Leningrad [now St. Petersburg] in 1975. One of the main reasons I’ve been interested in Russia — both in my career and in my personal life — was an interest in the Soviet and then Russian space program, and an interest in the opportunity to work with them.

The second reason is that I am deeply interested in education. Over the past 15 years or so I’ve started five academic programs, including one university: the International Space University in Strasbourg.

I also founded an international education program called CDIO [Conceive, Design, Implement, Operate] which has actually been broadly incorporated into the reform of engineering education in Russia.

The third aspect of why I am here is an interest in founding things. I believe there are founders and then runners, and both are important. You need people to found institutions and then people to run them well. I like to think of it as the guys who make the trains run on time, and the guys who put down the tracks: I’m a guy who puts down the tracks, and [Skoltech] was a marvelous opportunity in that regard.

Q: When you arrived in Russia to lead Skoltech, what were your major goals? Where did you envision this project going?

A: The blueprint for Skoltech was first developed by MIT and implemented in the first year of our partnership with that university. It envisioned by 2020 a university with 200 professors, 1,200 students, and around 350 researchers and post-docs.

The research conducted by the university is focused in areas that were aligned with then-President Dmitry Medvedev’s goals for the reform of the Russian economy, such as biomedicine, energy, information technology and what we call smart machines — things like spacecraft and robots. So we have pretty much focused on these areas while inventing this new university.

What we try to do is attract professors and students from Russia and around the world with a deep passion for not only developing new science, but applying new science — and that’s really the difference. We are introducing market pull into the operation of a university. We are trying to invite people from the market to come here and help pull our technology toward their needs.

Q: Have you faced any backlash from other universities in Russia or abroad who might look at this project and say “this is a skewed educational model, we don’t like it?”

A: No, actually one of the surprising things was just how supportive other universities in Russia have been of Skoltech. One of the reasons for this is that there is a general acceptance among the leadership of higher education in Russia that the system needs a lot of change.

Having institutions like Skoltech can help catalyze change. It gives other rectors something to point to and say there are other models possible in Russia other than the traditional model that has evolved basically from Stalinist roots.

So Skolkovo is a generation, not just a building. We are small, with only 60 professors and a couple hundred students, but even at that size we are trying to reach out to the other universities around Russia and be a transformative agent in the Russian ecosystem.

Q: How is Skolkovo funded — is it all Russian government funding?

A: No, not all of it. We actually have a very strong program to attract funding from sources other than the Russian government — I mean, not from the Skolkovo Foundation, because in Russia a lot of money is state money one way or another.

We have also succeeded in attracting funding from private companies, such as Yandex, and other non-government sourced funding. We have some international funding, including European Union grants. So Skoltech will really grow.

What the Russian government is doing is really what governments should do. That is priming the pump — helping us to build the facility, equip it, and get through the first few years of operating expenses. The expectation will increasingly be that government funding will be a smaller and smaller fraction of total funding.

Now having said that, in no place in the world is the university really independent from the government. I suppose there are a few business schools and private schools that really do just pay the bills from tuition [fees], but even in the U.S. the vast majority of schools get state funding.

Q: Skolkovo’s reputation has benefited greatly from [Prime Minister] Medvedev’s attachment to the project. Have you felt any change in attitude from the government toward Skoltech as Medvedev’s star has been perceived as rising and falling over the past few years?

A: No, I think that the Russian government under both Medvedev and [President] Vladimir Putin has been totally committed to innovation in the country. I mean, there is just no other way to reform this economy, especially in view of the vast investment and vast depth of capability of science and technology in Russia.

There’s a little bit of nuance going on [with regard to] exactly how you do it, whether one program has all the spotlight and everyone else plays second fiddle, or if you have many centers … but we continue to have very strong support from Medvedev, and the Deputy Prime Minister [in charge of science and innovation] Arkady Dvorkovich. And we also have strong support from the presidential administration — [former deputy head of the presidential administration] Vladislav Surkov is a member of our board — so I have not felt any fallout or any change in our relationship.

Municipal deputy Ilya Yashin faces up to 15 days in jail for “disobeying police orders.”
‘As long as it takes’

“The enemy is deliberately terrorizing the civilian population.”
civilian casualties

Ukrainian President Volodymyr Zelensky called the strike "one of the most brazen terrorist acts in European history."