Russia's biennial International Air and Space Salon — known as MAKS, its Russian acronym — launches on Tuesday and will run through Sunday. Its first three days are considered to be business days for defense industry officials, and the show opens to the general public on Friday.

Although MAKS is traditionally used by domestic and foreign civilian airplane and helicopter manufacturers to show off their products to potential buyers, one of the clear purposes of the show will be to display the full might of Russia's air force.

Some of the planes will be old vintage Soviet aircraft that no longer fly, and several will be developmental planes not yet in service, but last month the head of Russia's air force, Viktor Bondarev promised that every flying machine in Russia's inventory will take part in the show.

This might be overwhelming for the uninitiated, so The Moscow Times has put together a handy guide of the five coolest Russian military aircraft that will be on display at this year's MAKS show to keep an eye out for.

Though not expected to take part in one of the several aerial exhibitions throughout the week, the coolest Russian airplane on static display this week will surely be the massive Tu-160 supersonic strategic bomber. Known to NATO as "Blackjack," the Tu-160 was the last strategic (read nuclear-capable) bomber developed by the Soviet Union, and is roughly analogous to the U.S. Air Force's B-1B Lancer in appearance.

Though not a stealth aircraft proper, the Tu-160's sleek contours minimize its visibility on enemy radars, making it harder to detect while it speeds toward foreign targets. The plane's wings are adjustable — spreading out wide for slow and low flight during takeoff and landing, and moving in close to the body for supersonic flight.

The Tu-160 is crewed by four airmen, can fly at a maximum speed of 2,000 km/h and carry up to 12 nuclear-capable cruise missiles.

First deployed in 1987, only 35 of the bombers were built before the collapse of the Soviet Union saw production grind to a halt in the early 1990s. Today, only 16 of the bombers are in service with the Russian military, according to Air Force Magazine's annual Almanac of Russian Air Power.

But over the past few months Russian defense officials have promised that production of the Tu-160 will be relaunched in the early 2020s. In May Bondarev said the Defense Ministry was interested in purchasing up to 50 of the new planes. 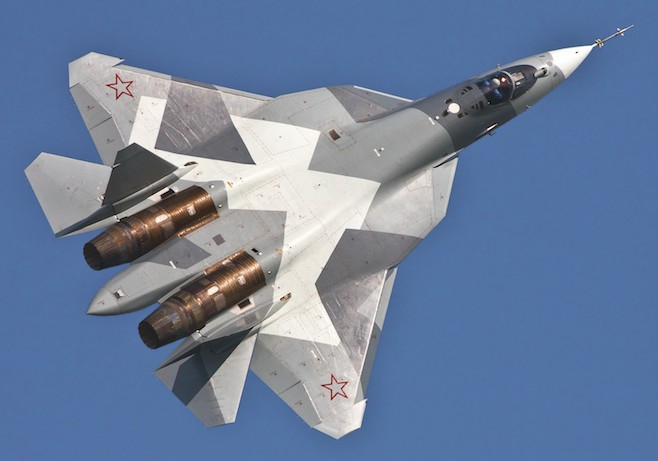 Russia's first fifth-generation stealth fighter, the Sukhoi T-50 (also known as the PAK FA), will be making its first public appearance since the 2013 MAKS airshow this week as part of the aerial demonstration flights, Bondarev told RIA Novosti last month.

The new fighter, which several Russian media outlets have presented as "a revolution in aviation," was a glaring no-show at this year's Victory Day parade where Russia showed off a wide variety of brand new military hardware.

To make the fighter stealthier, it keeps its weapons hidden inside of its body — however it can mount extra weapons, such as missile and bombs, under its wings for missions that don't require stealth.

In the stealth configuration, the T-50 can carry up to four missiles of various types in its two internal weapons bays, and has one single-barrel 30-mm cannon for ground attack or dogfighting. In a dogfighting role, the T-50 appears to be extremely maneuverable. 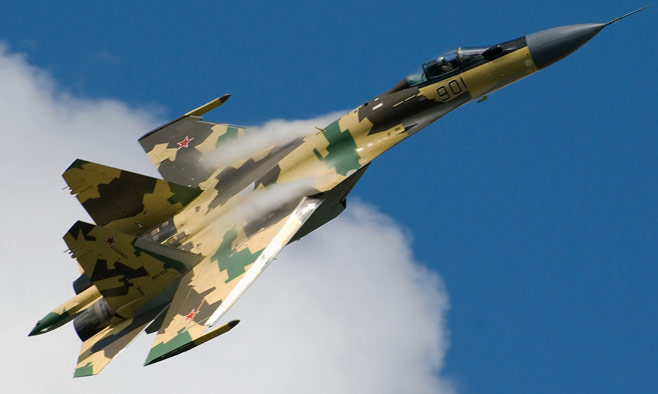 Russia's Su-35 is the air force's current top of the line fighter jet. It is the latest modification of the Soviet-era Su-27 fighter jet, and is being used as a stopgap between those older planes and the eventual completion of the T-50 project, which is facing delays.

Russia only has 34 of the planes in its inventory right now, but the United Aircraft Corporation, Russia's state-controlled aviation monopoly, is set this year to deliver 14 more of the planes. The Defense Ministry is expected to sign a contract for another 48 of the planes at MAKS, Russian media has reported.

The Su-35 is outfitted with many of the same electronics and weapons that will be featured in the T-50, but with no need to be stealthy, it can carry more missiles on its 12 wing racks.

An earlier version of the Su-35, known as the Su-30, has been Russia's most popular export fighter jet since the early 1990s. 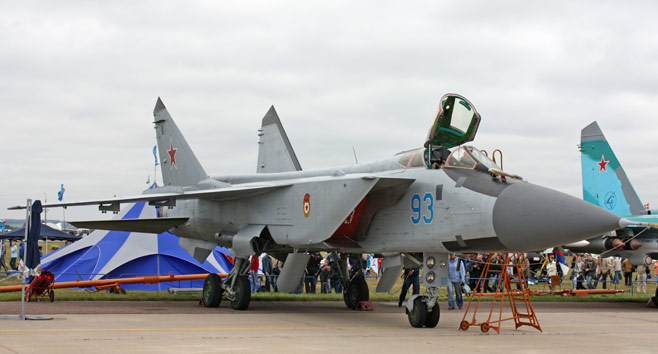 An old classic from the Soviet air force, the MiG-31 interceptor is one of Russia's most distinctive aircraft in current service. The plane is distinguished by its two-seat cockpit and boxy appearance. The Foxhound is optimized for flying high and fast to catch enemy bombers and cruise missiles infiltrating Russian airspace.

Its max speed is reported to be up to nearly 3,000 km/h (which is much faster than the Tu-160 supersonic bomber). Though there have been some Russian media reports suggesting that the air force wants a new bomber interceptor, the entire MiG-31 fleet of about 130 aircraft is undergoing a modernization process that should keep them flying until at least 2030.

The MiG-31 was an extensive upgrade to the older MiG-25, which first flew in 1964. The MiG-31 entered service in 1981, and is capable of tracking a number of enemy aircraft simultaneously. The aircraft's computers are capable of networking and sharing information with other Russian planes in the area, making a sort of flying data center for Russian air defenses.

The MiG-31 is armed with a six-barrel cannon that fires 23-mm shells, and can carry up to four air-to-air missiles, according to the Almanac of Russian Air Power. 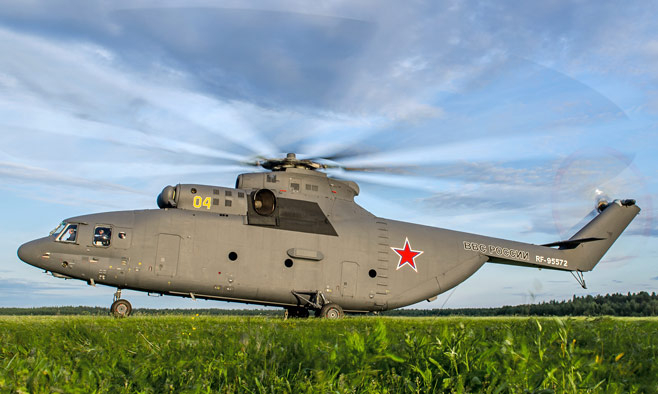 Though not a combat helicopter, one of Russia's coolest aircraft is the massive Mi-26 heavy lift helicopters — in fact, it is the world's largest heavy-lifter. First introduced in 1982, the design of the Mi-26 has not been drastically altered since its inception, according to the Almanac of Russian Air Power. However, Russia last year started production of an upgrade for export to Algeria, one of its largest military trading partners.

The Mi-26 is highly capable and versatile as a transport aircraft, and Russia has about 40 of them in its inventory. It can be distinguished from other helicopters by its sheer size and dolphin-like nose.

Crewed by four airmen, the helicopter can transport almost 70 paratroopers, over 80 infantrymen, or up to 20,000 kilograms of cargo. Its maximum speed is 295 km/h, with a range of 590 kilometers carrying a full load. Machine guns can be mounted at its windows if a Mi-26 is transporting troops and equipment into a hot landing zone.