Even though Moscow retail property owners are increasingly willing to offer favorable lease terms to clients, Moscow's central streets continue to lose their tenants who are forced to close their outlets due to the economic crisis.

In the first half of the year, the vacancy rate in prime locations in downtown Moscow climbed to 11.8 percent, the highest since 2009, according to a report released by real estate consultancy Colliers International this month. The report said that the rate may reach 14 percent by year end.

Of all the central streets, Ulitsa Bolshaya Lubyanka now has the highest vacancy rate of 38 percent, and followed by Sadovaya-Kudrinskaya Ulitsa with a 30 percent vacancy rate and Ostozhenka Street with 27 percent, the report said.

It is mostly closures of banks and clothing stores that are to blame for these record vacancy rates, industry analysts told The Moscow Times.

Banks occupy a significant share in the street retail market and so are partly responsible for the dramatic increase in vacancy rates, as the economic crisis has caused widespread bank closures, said Svetlana Yarova, head of street retail at real estate firm Jones Lang LaSalle.

Vacancies rates in some parts of downtown Moscow have risen 2.5 times since the beginning of the year, according to the Colliers International report.

Moscow's clothing stores are also among the most affected by the crisis, according to the experts. Double-digit inflation and falling real incomes are forcing Russians to slash their spending.

Overall, retail trade in Russia fell by 8 percent in the first half of the year, according to the Rosstat state statistics service.

Retailers are moving away from central streets to smaller premises in other areas or to larger shopping malls, said Nikolai Kazansky, managing partner of Colliers International Russia. 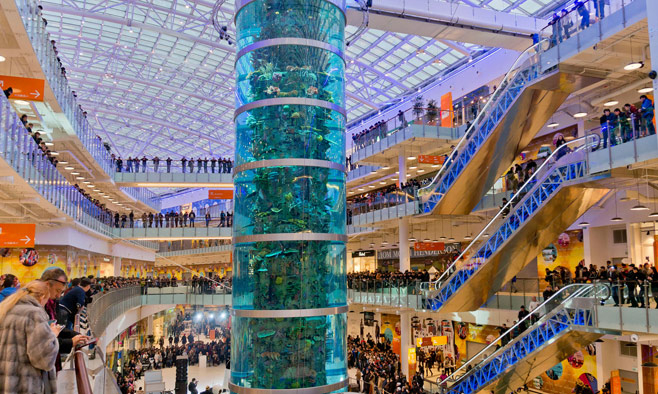 Six new shopping malls with a total area of 343,000 square meters have opened in Moscow in the first half of the year — a record for Russia's capital, according to data from Colliers International.

Shopping malls are also attracting more visitors as they provide convenient parking that is often not available, inconvenient or expensive in downtown Moscow

Meanwhile, retail property owners are seeking ways to stop the outflow of the tenants.

Amid the falling ruble, many owners now offer fixed rents in rubles. If they don't do this, retailers leave, Kazansky said.

The Russian ruble lost about half of its value against the U.S. dollar over the past year. The rental rates, often set in dollars or euros, have nearly doubled in ruble terms.

While clothing retailers and banks are giving up retail space in prime streets, lower-priced and mid-range grocery chains as well as fast-food restaurants are actively taking over their spots as they are more resistant to the new economic reality because there is an increasing demand for cheaper goods during crisis, market analysts said.

"We are now witnessing a transformation of the retail market," Yarova said.

Unlike Colliers analysts, Yarova predicts that the vacancy rate will fall slightly by the end of the year.

Property owners are already tired of making concessions, she said.