The show at the Manezh exhibition space that opened on Friday may go down in art history as the subject of an attack, but it should be remembered as the first time in nearly 60 years that the works of three legendary Soviet artists were shown together.

The exhibition displays dozens of sculptures, graphics, and paintings by Vadim Sidur, Nikolai Silis and Vladimir Lemport, as well as works by other non-conformist artists from the 1950s-1980s. Also on exhibit are works of art by contemporary artists whose style and themes share an affinity for the traditions of Soviet non-conformism.

The exhibition's paradoxical name, "The Sculptures We Do Not See," was the title of an article written by Vitaly Ginzburg for Literaturnaya Gazeta in 1987. In the article Ginzburg, who went on to win a Nobel Prize for Physics, called for measures to preserve the works of Vadim Sidur.  In 1989, the State Moscow Vadim Sidur Museum was founded and is now one of the museums in the Manezh Exhibition Association.

Vadim Sidur and Legacy of Non-Conformism

In 1954, Vadim Sidur, a war veteran who'd been severely wounded in battle, and two fellow students from the Stroganov Moscow State University of Arts and Industry, Vladimir Lemport and Nikolai Silis, formed an artistic group they called LeSS — an acronym made from their last names. Two years later during the relative artistic thaw after Joseph Stalin's death, they published an article called "Against Monopoly in Sculpture," calling for less rigid artistic strictures. The article led to some small official commissions and an exhibition of works by the three artists. That was the group's one and only exhibition.

Over the next decades the artists fulfilled state commissions but put their creative energy into working underground — literally in a basement  — on works that were at odds with the canon of socialist realism. Of the three, Sidur's massive, laconic monuments, somewhat reminiscent of the works of Henry Moore, received the most international attention. While he had no solo exhibitions in the Soviet Union, his monuments and sculptures were acquired and displayed around the world, including in the United States and the former West Germany. 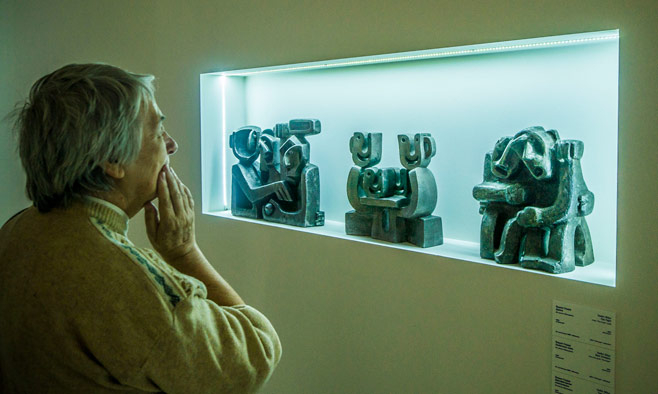 The curators of the Vadim Sidur Museum had long wanted to do a major retrospective. But, as Vera Trakhtenberg, curator of the exhibition and main conservator of the Manege Museum and Exhibition Association, told The Moscow Times, the project needed a large exhibition space to display works that would provide a context for Sidur's art.

To display the works, the vast expanse of the Manezh exhibition hall is dotted with pedestals of various heights displaying small sculptures and art objects. Towards the back the hall, the space is broken up by walls that spiral, contain archways and windows, or are made of rows of lights. Works of art are seen through these architectural frames, or discovered inside spirals and around corners. Trakhtenberg said that the curators chose this organization of the space because they did not want to show  "the work of non-conformist artists in the tradition of Soviet exhibitions." Instead, they wished to "create interesting architecture that would emphasize and highlight various exhibits and let people see them in a new way."

The '60s Generation and Heirs

The works on exhibit include sculpture, graphics, paintings, and mixed-media installations, and they range in style and tone from the deeply solemn to the playful and whimsical. Almost all the non-conformist artists used Biblical themes, which were taboo at the time. As Trakhtenberg said, "Sidur's works on religious themes were done in 1971, when atheism was the reigning ideology. Like many in the '60s generation, he was searching for something and turned to religion." She said that Sidur's linoleum tiles with carved images of Christ and the Crucifixion could be likened "to the first Christian paintings on the wall of the catacombs."

Another Biblical theme was used by the contemporary artist working under the pseudonym of Megasoma Mars, whose work was also damaged on the day of the opening of the exhibition. Marina Bobyleva, a spokesperson for the Triumph Gallery, which represents the artist, said that the "installation of 12 sculptures of the head of St. John the Baptist was made without any intent to offend, as a work on the theme of martyrdom — one of the main themes of Christianity."

The exhibition, despite the damaged and missing five works, will run until Sept. 6.

The Arts Editor since 2015, Michele A. Berdy writes about Russian and Soviet art, music, theater, film and literature.  @micheleberdy

The Arts Editor since 2015, Michele A. Berdy writes about Russian and Soviet art, music, theater, film and literature.  @micheleberdy