Russia is in danger of losing its traditional folk crafts as enterprises across the country struggle with low profitability, high taxes and a shortage of skilled workers.

Zhostovo painted trays, Gus-Khrustalny glassware, Khokhloma painting, Gzhel porcelain and Palekh lacquer miniatures are among the dozens of Russian craft industries seeking to revive their popularity at home and abroad to fend off financial ruin.

Their decline in fortunes, which began with the collapse of the Soviet Union, now threatens the very existence of Russian traditional folk crafts, many of which have become symbols of the country.

About 50 enterprises have closed since the 1990s, said Gennady Drozhzhin, president of the Russian Folk Arts and Crafts Association. According to the Industry and Trade Ministry, around 250 remain. But with Russia now mired in economic recession, Drozhzhin said that if action is not taken immediately, all Russian crafts could disappear within five years.

Zhostovo painting is a Russian method of hand-decorating metal trays that celebrates its 190th anniversary this year. The trays are usually decorated with bright flowers, fruit or exotic birds, painted on a black background and covered with several layers of lacquer. They are used both as trays and as decorations.

The trays are produced and painted in the village of Zhostovo in the Moscow region. The factory that makes them carefully maintains production traditions, painting the stamped steel trays as they did in the 19th century. Zhostovo trays can be found in museums around the world.

Khokhloma is a traditional Russian painting style used to decorate wooden tableware or furniture. The style uses golden patterns painted on a black or red background. The craft originated in the 17th century in the Nizhny Novgorod region, around 400 kilometers east of Moscow, and was named after the village that was for a long time a center for selling wooden artisan goods.

The production technology used today is the same as it was several centuries ago: The utensils are сut out of wood, dried and then ground with special primer, soaked with oil and rubbed with metal powder. After that they are painted. Finally they are covered with varnish and tempered in the oven.
Khokhloma tableware was originally produced only for the royal court, but then became popular nationwide. The Paris Exposition of 1889 gave Khokhloma a global name and led to a significant increase in exports.

Russian Gzhel ceramics are famous for their cobalt blue-on-white decoration. Gzhel took its name from the village southeast of Moscow where it has been produced since 1802. However, the earliest mentions of Gzhel pottery date back to the 14th century. The method of baking, painting and glazing the clay has not changed since then.

In the middle of the 18th century, Gzhel porcelain began to gain popularity all over Russia. Today Gzhel is considered one of the symbols of the country and Gzhel porcelain is traditionally among the gifts given by Russian presidents to foreign dignitaries.

Among the hardest hit are small local factories far from densely populated areas, but even world-famous Russian manufacturers such as Khokhloma, near Nizhny Novgorod, and Gzhel, outside Moscow, are struggling to preserve the country's cultural heritage.

A key problem is retaining workers, who too often prefer to move away or find easier jobs in local retail. Those willing to work tend to gravitate toward cities, and even unskilled workers are difficult to replace.

"When the people now working in the factory leave, there will be nobody to replace them," said Pyotr Sivov, director of the biggest factory producing Gzhel, a famous blue-and-white decorated porcelain made from a clay found in the Moscow region.

The last 25 years has seen a huge outflow of specialists from factories like Sivov's, cutting their staff levels by five to 10 times, according to Drozhzhin.

The Gzhel factory has been hit less hard. It now employs 130 people, around 30 percent fewer than in the early 1990s, said Sivov. The average craft industry currently employs around 50 people.

The conditions offered by craft enterprises aren't attractive enough. The average salary in the industry is no more than 15,000 rubles ($250) per month — less than the average Russian wage.

Traditional crafts industries have been guarded in Russia for centuries. Even during World War II workers were withdrawn from the front lines to preserve production.

But when subsidies dried up following the collapse of the Soviet Union, the industry struggled to stay profitable.

Every second craft enterprise in Russia is now loss-making or barely breaking even, Drozhzhin said. And with the economy predicted to flatline over the coming years the situation is likely to deteriorate.

Factories find it hard to pay payroll taxes that have been raised to 34 percent in recent years. They used to get a special discount, and paid 20 percent.

The proportion of manual labor in cost of traditional production can be up to 80 percent, yet producers are obliged to pay the same payroll tax rate as industrial enterprises, where the share of manual labor doesn't exceed 10 percent, Drozhzhin said.

Most craft industries have also been hit by the economic crisis that began last year and has wiped around 40 percent off the value of the ruble versus the U.S. dollar since the start of 2014. It has also caused Russians' real incomes to fall sharply.

Sales of colorfully painted wooden kitchenware, furniture and decorations with red and gold designs made by the Khokhloma factory in the Nizhny Novgorod region have fallen by 10 percent as consumers respond to the recession by reining in non-essential spending, said the factory's director, Yelena Krayushkina.

Industries that import materials, like the Khokhloma factory, have also seen their costs rise thanks to ruble devaluation. The opposite is true for Gzhel, whose clay is locally sourced. As imported porcelain has become more expensive, "demand for Gzhel products is now increasing," Sivov said. 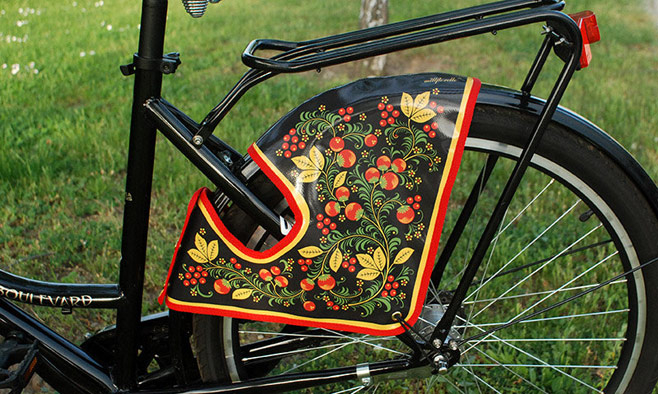 An example of Khokhloma painting used as a bicycle decoration.

In Search of Customers

Higher taxes and, for some, the rising cost of materials have led to an increase in prices and made many Russian crafts less competitive with Chinese counterfeits on the market.

That is one reason cited by manufacturers for falling sales. Another is that Russians, especially younger Russians, are no longer familiar with the country's traditions and folk crafts.

"We do receive orders from companies or individuals, but they are mostly our friends or friends of friends, who we told about our products," said Antonina Prokina, commercial director of the Zhostovo Factory of Decorative Painting, a workshop in the Moscow region that makes black lacquered metal trays decorated with bright flowers.

The Khokhloma factory during the Soviet era supplied kindergartens with wooden children's furniture decorated in the Khokhloma style, so that children from their early years were surrounded with traditional Russian art.

People who grew up during that period know what Russian crafts are, but their kids don't, Krayushkina said.

The popularization of craft products on a national scale would help, as would the development of a distribution infrastructure to help increase sales, the factory directors said.

Most large crafts factories used to have branded shops in Russian cities. They would also sell in Communist-era stores like Beryozka, where goods were sold, mostly to foreigners, for hard currency.

That has changed. Krayushkina said it was sometimes difficult for the Khokhloma factory even to get its goods into gift shops, which want to sell cheaper, lower-quality products. 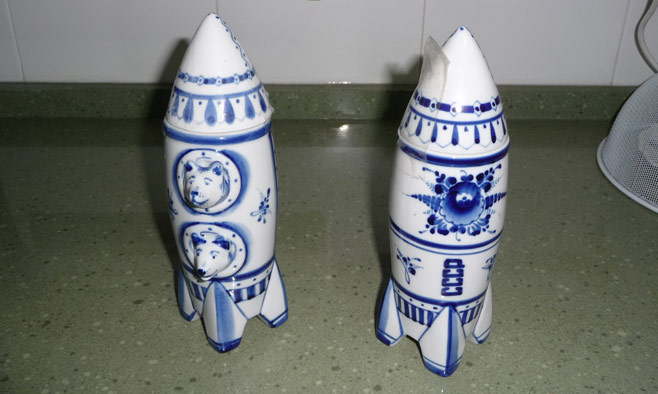 The brand shops that used to sell in Russian towns could once be seen in Berlin, London, Vienna and other European cities, where the Soviet state managed the export and sale of Russian craft production.

In the 1980s, 50 percent of our products were sold abroad, said Gzhel's director, Sivov.

Now the factories themselves are responsible for distribution and sale of their goods, and small companies struggling to stay afloat even in Russia cannot afford to enter the international market.

Exports are now trending toward zero, according to Drozhzhin.

Together with the crafts association, large manufacturers attempted to take the matter in their own hands, opening a sales office in Vienna in 2013, but were forced to close when rent costs proved too high, Drozhzhin said.

Sivov said his Gzhel factory was getting orders from Taiwan, China and other countries through its online shop. These sales are far lower than during the days of Soviet-sponsored export, Sivov said, but even if the company could develop overseas demand, there would simply not be enough staff to produce more pottery, he added.

People are leaving the factories in search of better conditions and salaries, and often find them in the nearest supermarket. Most of those that remain are over the age of 40. Young people are not interested in craft industry work.

Low wages are only one reason for that. Another is their location. The majority of enterprises are in small Russian towns, which have in recent decades seen a slow exodus of young people looking for more comfortable, urban lives. The Khokhloma factory's Krayushkina said the only way to attract people from other areas was to provide them with free accommodation. But they can't afford that, she added.

Even those crafts factories like Zhostovo in the Moscow region that are near a big city and ready to offer competitive salaries lack new workers.

Only 30 people now producing hand-painted Zhostovo trays, where once it was 300.

These professions are just out of fashion now and it's very sad, Prokina said.

Russia could increase taxes for the first time since the invasion of Ukraine to help plug a hole in the state budget, independent media outlet The Bell...
fatal shooting