Ian Evtushenko for The Calvert Journal.

I am sitting alone on a rickety bunk in my cabin, and through the glass of the porthole I am watching the smooth surface of the Yenisei. The Krasnoyarsk-Dudinka route sets out along this great river at 5 a.m., and I am still unsure what watery demons I may meet on this lengthy four-day journey.

Most of my previous ventures involving water have been unsuccessful. I once got stuck on an ice floe in the middle of a lake, I lost my favorite tortoise on board a ferry, and I almost died of boredom while fishing. Any contact I have had with this element has been a torrent of disappointment. Add in seasickness and you understand why I prefer to see rivers, lakes and seas merely as a blue decoration to dry land.

I booked a ticket on the ferry Valery Chkalov pretty spontaneously. As my geography teacher used to say, the Yenisei is the seventh-largest river basin in the world. In the absurdly huge region of Krasnoyarsk, the river is the only thing connecting the extreme north with the southern plains. The northern deer herders called Yenisei the "great water," while the southern camel herders called it the "mighty river" — the idea is in essence the same.

Not far off from the city rises the majestic wall of the Krasnoyarsk dam. It is known to every inhabitant of Russia, immortalized on the 10-ruble banknote. Only birds can appreciate its scale in full — the dam breaks the river into two levels, with a distance of 120 meters in between. Ships on the Yenisei have to get into a kind of funicular, which carries the boats upward together with water under the keels, and then releases them at the top into open water. Although this technical innovation delights with its cunning, my main reason for coming here was an attraction named the vodosbros (water overflow): from the highest point of the dam to the river's surface below fall innumerable cubic meters of water. The streams of water turn into clouds of thick spray and electricity. I spent a few hours in amazement on the sandy bank of the Yenisei and after, totally spellbound, I went to the port.

The ferry runs once a week, but I got lucky — there was a ticket available in the two-berth 1st class on board the hundred-meter Valery Chkalov, and it cost around 16,000 rubles. "This is a transport ship, not a cruise liner, which costs around four times more, and only differs in that they say a little more on the radio and they stop for a little longer," said the old woman at the ticket desk. This animated stream of argument broke the last remnants of my resistance. I clambered up the gangway of the three-decker, whose scale was as nothing against the background of the great river, threw down my things in my cabin and went for a walk around nighttime Krasnoyarsk.

The following morning, to the cheerful sounds of "Farewell of Slavyanka" on the speaker, the ship cast off. For a couple of hours it crept under town bridges before sailing out into open water. The thin silhouettes of trees appeared through a dark blue veil of smoke. When we reached a narrow section, the Ataman pipe, the current strengthened and the landscape changed. Above the boat, gray jagged rock faces suddenly rose up, and the sky started to darken. Further along the course was one of the most dangerous sections of the great river, the Kazachinsky rapids.

The breaking waves foamed and whirlpools swirled against the side of our boat, like a pot boiling over. The thick surface of the water concealed treacherous rocks below.

Here it became obvious that the indigenous people of the area were not mistaken in their estimation of the nature of the Yenisei. The breaking waves foamed and whirlpools swirled against the side of our boat, like a pot boiling over. The thick surface of the water concealed treacherous rocks below. One of these rocks was named the Modest after a ship it destroyed in 1898.

The passage through the rapids only takes a few minutes but you could feel the tension in the air. The boats pass through a particularly treacherous part in an orderly line, and small vessels resort to the help of a special tow — a chain boat. We came across barges immediately after the Kazachinsky passage, which the Chkalov greeted with a deafening honk, in which the notes of relief were tangible. Beyond the Kazachinsky rapids, the ship sailed past peaceful but monotonous blue-and-green landscapes, which after a while began to irritate the eyes. Dusk descended and I returned to my cabin.

Relations with my neighbor, Vasily, a thick-set Siberian man with deep wrinkles around the eyes, were rapidly drying up along with my attraction to the Yenisei. "Where are you sailing to?" I asked. "Sh-- sails, ferries travel. To Turukhansk," came his reply. The following night Vasily's snoring added a steady rhythm section to the ceaseless drone of the Valery Chkalov's engines, and this duet decisively sank my hope of sleep. Vasily exuded the impression of an especially local man, who used the great river like a bus route, jumping from one coastal settlement to another with a trader's suitcase. It seemed that the majority of those on board were much the same. Eastern Siberia is not renowned for its splendid network of motorways — the roads end after Yeniseisk, a small ancient two-story town some 400 kilometers from Krasnoyarsk. The only non-aerial route across the remaining 900 kilometers to the Arctic Circle is the great river, along which the three-decker giant Chkalov, and its brother the Matrosov, have been calmly gliding since 1954.

The interior of the ship, incidentally, reflected the design aesthetics of its time. If Wes Anderson had chosen to make a film about a comic river adventure instead of "The Grand Budapest Hotel," his palette would have consisted entirely of brown and green.

A shower is located on each deck, however these only work for a few hours in the morning. In their free time, passengers can explore the treasures of the reading salon, with its prerequisite list of Russian classics. They can play chess, or simply go around observing the archival photographs of the Chkalov, hung in every available nook and cranny. For 70 years the brass and wooden rigging of the ship has stayed almost unchanged which makes it even stranger to come across modern GEC monitoring systems on board giving out all the information on the movements of the river.

Having tired of examining the various studies in brown, I went for a stroll on deck. The morning fog was starting to disperse and sharp slopes of rock faces were emerging through it. 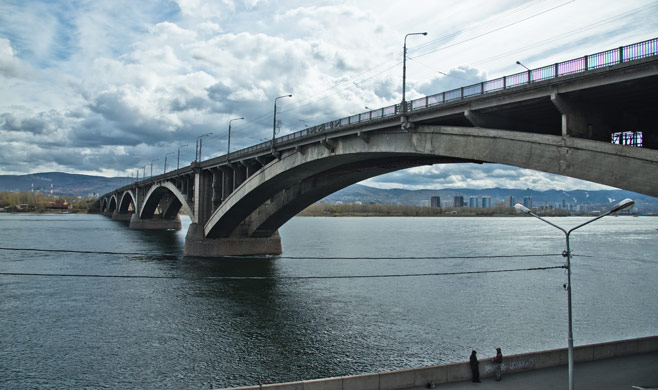 A calm stretch of the Yenisei River, the seventh-largest river in the world.

We moored three times that day — in Vorogovo, Bor, and Bakhta. All of these villages were 400-500 years old, and none had changed much in that time. There were slanting beaches of yellow sand, the din of woodland groves and a moment of uproar from the waterfront market when our vessel pulled up to shore. A resident of Vorogovo told me that the villages survive from boat to boat.

The rare moments of animation on land again gave way to the measured passage of the vessel. I increasingly stayed at the stern of the boat, and the dusk smoothly changed its color. The reflection of the boundless sky in the waters of the Yenisei was becoming stronger, and the open space gradually merged into one color. All of a sudden the signal buoys lit up in the soft purple haze.

"Buoy keepers used to light them by hand with kerosene, but now they are automatic." I hadn't noticed the figure of Vasily creep up on me, but he didn't comprehend my questioning look. "My father was a buoy keeper on one of the sections, he knew the riverbed like the back of his hand. He even used to drive the ship in the dark if the captain didn't want to."

The reflection of the boundless sky in the water was becoming stronger, and the open space gradually merged into one color. All of a sudden the signal buoys lit up in the soft purple haze.

At once Vasily started to narrate all the legends of the great river. He told me about how in the war years, workers had restored the Ob-Yenisei canal, without which the supply of nickel for the tanks would have been impossible. He told me about the Korablik island and its companion the Barochka. He told me about the Petkin rocks, named in honor of the unsuccessful maneuver of a boatswain called Petkin, whose boat subsequently sunk. And he told about how they had wanted to somehow destroy the Kazachinsky rapids, but were too fearful.

The ember of a cigarette lit up the face of this river man, who was almost invisible in the darkness, but he was looking somewhere below, into the depths of the river, which had been a lifetime companion for him, his father and countless generations before them. Siberians casually name the river batyushka (father).

Vasily glanced over the side and descended to the motor launch — the further north we went, the fewer moorings there were. The motorboat disappeared into the night with a hum.

The last days of my journey passed under a canopy of leaden clouds. The river was becoming wider — in certain parts the distance between banks was some 15 kilometers. Land was almost out of sight.

We sailed past the wooden houses of Turukhansk a long while after the disappearance of Vasily. At this point we were already being greeted by dirty, two-meter high, unmelted ice floes, broken off by the powerful movement of the ice drift when the Yenisei shook off its dumbfounding winter shell and began to rush back to the ocean. The breath of the north is keenly felt here — the sky hangs lower, and in place of sharp banks and rustling trees, gloomy pebbles, watery sand and the slanting saplings of the forest tundra. Ahead is the region of Igarka inside the Arctic Circle, and the final stop — the polar port of Dudinka. The place looks exactly as I envisaged it — concrete blocks of buildings, cracked from the frost; huge shipping cranes; a scattering of heavy-duty trucks.

I went out onto the higher deck to meet the setting of the lingering sun, which in the northern summer never sets. The piercing orange light glinted off the handrail, distorted by snowdrifts; it flooded over the wooden planks of the decking; it illuminated our faces. The whole world around was saturated in rosy gold.