The 37th Moscow International Film Festival (MIFF) begins on Friday, June 19 with the traditional tuxedos, diamonds and traffic jams. The festival will open with "Wolf Totem," a film directed by competition jury head Jean-Jacques Annaud, that takes place in Inner Mongolia among nomadic herdsmen, and will end a week later with a family drama from the Italian director Sergio Castellitto called "You Can't Save Yourself Alone." In between, hundreds of films will be shown around the city in three competition programs — feature films, documentaries and short films. And nearly a dozen special programs will screen old and new movies that range in subject matter from the Armenian genocide to local life as portrayed in Argentinian cinema.

Twelve films representing as many countries, from Finland to Lebanon to Japan and Spain, have been nominated for the feature film competition. This year one Russian co-production and two Russian films are vying for the top honor: "My Good Hans," a Russian-German-British film directed by Alexander Mindadze about a complicated prewar friendship between two factory workers, one German, one Russian; "Orleans," directed by Andrei Proshkin, a tale about a stranger who arrives in a small town in the Altai steppe and wants the villagers to pay for their sins; and "Arventur," by Irina Yevteyeva, a movie that consists of two fables about leaving reality for a world of extraordinary beauty and harmony that may or may not exist.

So far the movie industry rumor mill is mum on the chances for the local favorites. But if the competition was for longest production period and technical originality, "Arventur" would win hands down.

The technique used to make it — a mix of live action and animation — was invented by director Yevteyeva 25 years ago. Each film she makes with this technique takes up to five years of labor. "Arventur," which took a mere three years, was the director's "personal best."

The visual style of Yevteyeva's film came to her, literally, in her sleep. "I had a dream in which I saw an image of paint daubs and reality," she said in a recent interview. "It was very beautiful, and I wanted to figure out how to reproduce it. I started in 1991 without any equipment or assistants, just by painting on glass. Today I'm still trying to create what I saw." 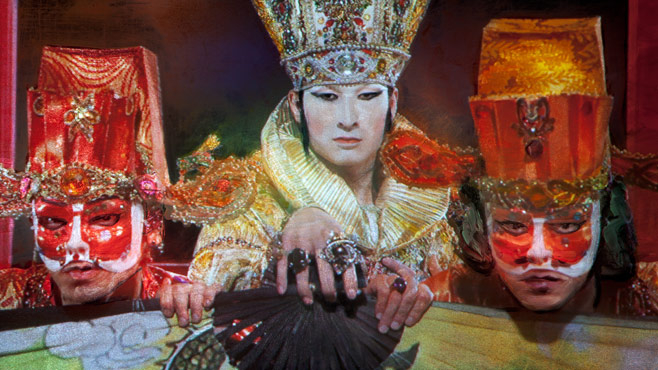 Confrontation between the Chinese Emperor and an artist in "Arventur."

The painstaking technique Yevteyeva uses has not changed much over the decades. First she films the story with actors in studios and on location. The film production period is relatively short — all of "Arventur" was filmed in nine days. Then she takes these filmic "raw materials" and combines them with thousands of hand-painted glass plates. Light is projected through the painted images and live action sequences to produce a lushly beautiful but somewhat unsettling image that jumps and glides between reality and fantasy, between a film and a painting.

This is exactly what Yevteyeva intends. "I'm interested in the relationship between realities, how a person can open the door to another reality, enter into it, learn something new and be happy in that knowledge," she said.

In "Arventur," doors open to several realities in two separate but inter-related stories. The first part, "Fandango," is based on a short story by Alexander Grin about a man who disappears into an imaginary world from cold and war-torn St. Petersburg in 1921. The second story, "The Mystery of the Sea View," is based on a Daoist fable. A Chinese Emperor, raised in a palace filled with a celebrated artist's magnificent paintings, discovers that the reality outside his palace walls is inferior in every way to the reality of the paintings inside.

"Arventur" is the fifth collaboration between director Yevteyeva and composer Andrei Sigle, who was also the film's producer at Proline Film, a St. Petersburg studio. "Yevteyeva's 'Arventur' is absolutely unique cinema, a mixture of pure art and marvelous literature, painting and music," he said. "It is the cinematic ideal: a blend of pure forms of art."

But that is not necessarily enough to win, Sigle admitted. "Winning or losing — that's a lottery. But even if we win, afterwards we begin the hard work of trying to get the film distributed." "Arventur," he said, is not for the average viewer.

"If you just want to kill some time in the movie theater, 'Arventur' isn't the film for you," Sigle said. "But if you want to see real cinematic art, then come. It's cinema that lifts you out of your everyday reality."

"Arventur" is being shown on Sunday, June 21 at the Oktyabr multiplex cinema Novy Arbat 24. Metro Arbatskaya. At 5.30 pm. For program information, screening times and venues, and ticket availability, see the MIFF site.