Seven-year-old Mikhail Safonov is creating his own musical composition on a harp. But this harp, unlike others he has seen, doesn’t have any strings — it is a laser harp, invented in England in 1975.

The laser harp is on display along with numerous other wondrous items at the interactive Experimentanium science museum in northern Moscow.

When the museum first opened its doors in March 2011, it was something completely new on Russia’s museum scene. Featuring more than 200 scientific objects in the fields of acoustics, mechanics, optics and anatomy, the project’s organizers hoped the museum would popularize science for kids, but also appeal to adults.

“We based the museum on our foreign colleagues’ experience, but we were the pioneers of the interactive science museum idea in Russia,” says the Experimentanium’s science consultant Mikhail Luzhkov.

Today, Luzhkov says, the market is becoming more competitive, but so far the Experimentanium has no real competitors and, in fact, has had to move to a new facility to keep up with demand.

The museum’s spacious, new three-storey building just off Leningradsky Prospekt on Baltiiskaya Ulitsa is 30 percent larger than the Experimentanium’s previous home near the Savyolovskaya railway station, according to Luzhkov.

The facade of the new venue makes it clear at one glance that the focus of the museum is science — the walls are painted with graffiti of test tubes, pipes and other laboratory equipment.

The museum is organized into seven halls, each focused on a single theme — acoustics, optics, electromagnetism, electricity, water, puzzles and mechanics.

First-time visitors Oleg Yegorov and his grandson Yevgeny Yegorov, 9, are fascinated by the magnet cloud in the magnetism hall. “It works really easily — you take a magnet and scoop up iron particles in an oil filled glass plain. When you remove the magnet, all the particles swirl in clouds. But you can organize those clouds into patterns and different shapes. It is like painting with a magnet and iron pieces. It is a fantastic experience!” Oleg Yegorov says.

Not all the exhibits are so accessible for younger visitors, however. Some are intentionally presented to show that the scientific conclusions reached as a result of experiments are not always the ones scientists expect.

Artyom Lunin, 12, stands in front of a perpetual motion machine, trying to figure out the science behind its spinning wheel. “The sign says the engineers wanted this wheel to never stop, but now I see that it is impossible,” Lunin says. A sign posted beside the machine explains that there can be no such thing as an isolated perpetual motion machine because such machines violate the laws of thermodynamics. 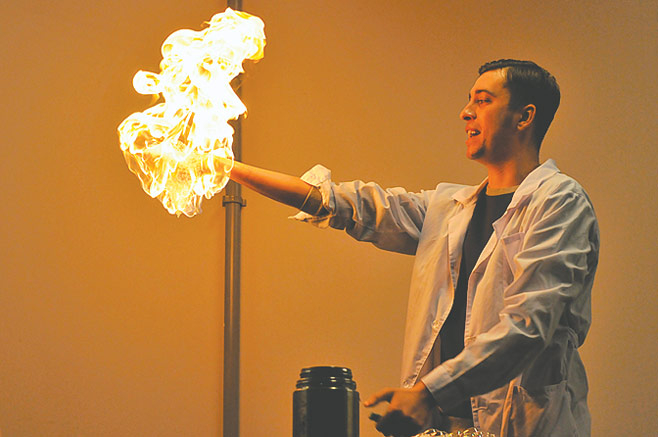 The Experimentanium is not the place to get away for a quiet afternoon. Every room is buzzing with noise — from the sound of machines spinning to objects hitting the ground and water splashing.

The new water room attracts the most attention. “The water room is so far the most engaging part of the exposition,” says the deputy head of the Experimentanium’s development department Alexandra Kazachkova. “It is one of a kind in Russia. It lays out unique interactive tools that you are unlikely to see in real life.”

In the water room, kids learn the basics of hydrodynamics in an accessible and hands-on way by watching geometric

figures in a water tank. The figures sink at different speeds depending on their properties. Other popular exhibits in the room include a wave tank and a tsunami generator. Children can also construct a whirlpool in a large tube and witness the Coriolis effect, which affects winds and ocean currents. There is also an exhibit that allows kids to construct a small hydroelectric power plant model using water to turn a turbine and set turbine blades into motion, although this requires more concentration than many children can muster in the chaotic environment.

In addition to the permanent exhibits, the Experimentanium features rotating exhibits and interactive shows demonstrating principles of physics and chemistry. Kids can learn how to manufacture dry ice, freeze liquid nitrogen by boiling it under a vacuum or squeeze an egg into a bottle neck — a trick that seems impossible at first glance.

Although the Experimentanium is targeted at kids and families, there are exhibits that have appeal for guests of all ages.

“The vast majority of science centers abroad are state-funded and they never believe when we tell them about our private project, such a thing is doomed for failure for them. So far it is hard to predict museum attendance figures but I believe such a place will always find its audience. Parents want to educate and entertain their children,” Rusina said.