A wartime song saying the snow would thaw and the "Russian rose" would bloom again enthralled the Russian-speaking community celebrating Victory Day in Christchurch, New Zealand.

About 400 members of the diaspora from the former Soviet Union celebrated the 70th anniversary of Victory Day in this city of about 350,000. Close to the international dateline, and nine hours ahead of Moscow, each day starts here earlier than anywhere else.

Bob Cotcher, 91, who had sailed with the Arctic Convoys bringing arms to Murmansk, sang in English to thank a Russian woman who had sung in Russian about the heroism and dangers faced by the Soviet sailors in the Arctic.

Cotcher, who is blind, balanced on a white stick as he sang. His performance brought the house down.

"The 'Russian rose' was a waltz that was played at every dance,'' the former Royal Navy aircraft armorer said after his performance. "It was written in the dark days when people thought Russia would lose. I don't know how I remembered it; the last time I sang it was probably 50 years ago."

The concert closed out a full day of events, which started with the dedication of a memorial the community had created dedicated to the dead of World War II. Topped with a red star, the memorial features a Soviet flag flying alongside the American, British and New Zealand flags.

At the dedication, Vera Mironova, 80, the sole survivor in her family in the siege of Leningrad, talked of her experiences; the president of the New Zealand-Russia Friendship Society, Nikolai Zvyagin, gave a brief history of World War II; and Orthodox priests conducted a requiem service.

After the service, the crowd moved to a park overlooking the city where reports about their relatives' experiences in the war could be read.

A field kitchen produced meals of buckwheat and canned meat, similar to those that troops ate during the war.

About half of those attending were under 30, with many children. Many of the young wore the wartime clothing of their grandparents and great-grandparents' generation. Others wore traditional brightly colored folk costumes.

The songs, poems and dances presented were a mixture of the exuberant and the solemn as they reflected alternatively on the arrival of peace and the cost of the war.

Children who attend a Saturday Russian-language school read poems they had written, demonstrating that Russian culture is alive and thriving in this outpost far from the land of their ancestors. 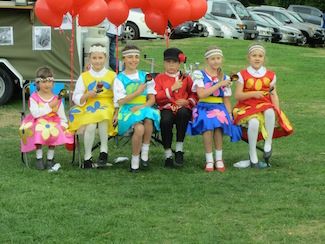 Children of the Rossinka dancing group perform with wooden spoons.

The performances continued in the evening in a school auditorium, where New Zealand historian and collector Alan Polaschek presented a display of Soviet and Tsarist military medals.

A talk on the role of the swift support of the Allies when Soviet armies were reeling from Hitler's assault, supply lines were broken and armament factories were unable to operate was well received.

Cotcher and fellow convoy veteran Bob Powell, 91, were the subject of many toasts at the end of the event, and many attendees came to the Royal Navy veterans' table to thank them.

The most popular toast offered was for "no more wars."

There was no mention of the conflict in Ukraine.

Thousands of Russian troops marched across Red Square, tanks rumbled through the streets and jets screamed overhead on Saturday in a huge military...
Diplomatic dispute