Contribute Today
By Pavel Goltsblat
May 5, 2015 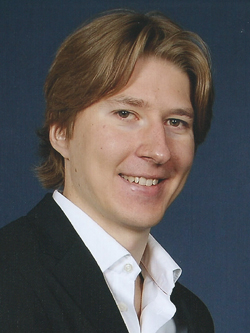 Now there have been numerous ramblings across the European peninsula and smoggy islands about a potential Greek exit or so called Grexit. Thanks to all the unnecessary media attention my mailbox is clogged with news alerts about Tsipras winking in a strange way or Varoufakis having a motorcycle followed on by a speculation as to how this may hint towards potential Grexit or the opposite.

Enough is enough. There will be no Grexit and here is why. Austerity does not hamper growth. Greek GDP actually started showing +ve dynamics despite all the austerity measures. Austerity is like a diet, it is painful and frustrating in the short term but longer term health benefits are much greater (Fig. 1).

It reverted back to -ve due to all the political instability caused by change of leadership (Fig.2).

Greek unemployment has been falling (Fig. 3).

Greece is one of the few countries in Europe that were able to consistently reduce their budget deficit and even record a surplus (Fig. 5).

Syriza's farce is a balancing act.

Syriza needed to have a loud populist agenda to win the elections and understandably they will not give up without a fight. That said, they realize that in case of the Grexit, which they use to blackmail the EU, Greek GDP will suffer at least a 40% decline, banking system will be destroyed and country will descent into chaos until the big brother steps in or new leaderships ceases power. In this scenario Tsipras and co will be paying the heaviest price and it will most likely be the end of their political careers. At the same time they need to show that they are delivering what people have voted for and hence all the noise in the media about demanding German World War 2 reparations, further debt haircuts etc.

What if Grexit is real? 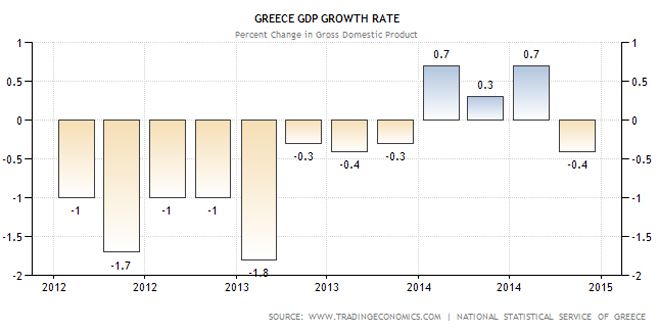 Now, assuming there is a Grexit, what will Greece actually gain? They will have their own currency and will be able to have its own interest rate policy. Oh wait, aren't interest rates already at -20 bps? Perhaps Greece could pay people to borrow, say 5% a year, will that help? I do not think so. Now by having your own currency you can argue that you could devalue it and therefore increase your competitive advantage exports will rise, employment created and boom you have GDP growth and prosperity. Well that all sounds great but will EU forget about the 240bn of debt? Most likely it will get converted into drachma and if Greece wishes to have a serious trading relationship with Europe it will have to budge.

And what exactly is competitive advantage in this case anyway? Cheaper drachma would mean that labour and other costs in Greece will be lower than in the rest of Europe in EUR terms. Now how about skipping the drachma bit and just lowering the prices to bring more business in? Surely that would help.

You can argue that by having independent currency Greek government will be able to print money endlessly to buy the social sector love by hiking wages, pensions etc. Only what is the point of having more drachmas if you still will not be able to buy much with it since when you print money your currency devalues. Also Greece will likely print even more to repay and devalue the real value of the debt converted into drachma and will therefore cause high inflation and price instability.

And do not forget that taxable base for Greek government will shrink in line with the GDP i,e, -40%+, so they may as well just pay out their debt the way things are at the moment.

The big guns will not give in. EU will do its best to keep Greece in since its exit will trigger a chain reaction and Europe has only started to rise from the ashes QE or not.

Ever wanted to buy a country?

Greek GDP is cEUR240bn current Greek bailout package is cEUR240bn, European QE size is 1trln. ECB has already bought Greece once, they have the cash to do it 4 times more.

YEREVAN, Armenia — Igor landed at Yerevan’s Zvartnots airport from Moscow on Tuesday, looking bewildered after his knee-jerk decision to flee...