In 2006, Andrew Lloyd Webber blogged about turning Mikhail Bulgakov's classic Soviet novel "The Master and Margarita" into a musical. "I am very aware that this will be almost certainly the most ambitious undertaking I have ever embarked upon. It will therefore almost certainly falter and will depend on who my collaborators are," he wrote.

Webber eventually abandoned his plans, but Russian production company Makers Lab has succeeded where he failed. Judging by the roller coaster show, the creator of "Cats" and "The Phantom of the Opera" would probably approve.

The show uses 3-D effects, animated scenery and, they claim, somewhat unconvincingly, a satanic 666 costumes including those in PVC, tulle, tweed and polyester. The novel's darkness is given a rubbed-up, glossy sheen. Bulgakov's book, a satire on the Soviet 1930s, tells of the devil's visit to Moscow, and separately of Pontius Pilate and his trial of a Jesus figure. The book was not published in the Soviet Union until the 1960s, decades after the author's death.

In the book, Bulgakov has Margarita, the mistress of the Master, an author in the book, descend into the devil's debauched world as an escape from the drab Soviet grays and browns. But the musical's 3-D animation and dancers mean that the volume and tempo are almost always on "high." Even Jesus' crucifixion gets some Hollywood sparkle: Multicolored clouds play dramatically across the backdrop, and the Messiah's groans of pain escape a bronzed, hairless chest and are punctuated by the flexing of muscles. 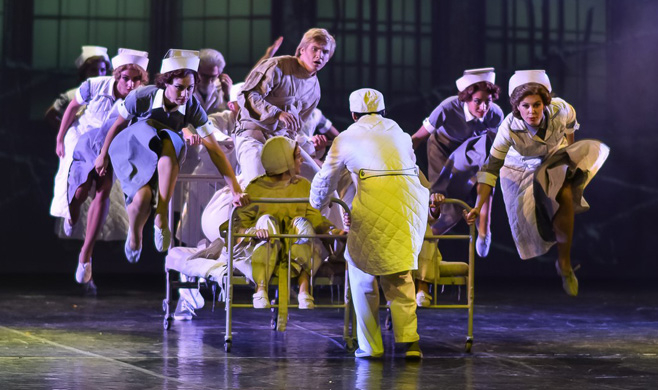 The Master and Margarita Musical

Despite some misgivings from Bulgakov fans, the musical has been a hit.

Producer Irina Afanasyeva said the show is a thoroughly modern take on Bulgakov's work. The show's website describes it as "A story of real, true, eternal love which will guide you through a maze of human passions and uncover the secrets of the great novel." And some faithful fans of the book will imagine on reading that they hear the sound of that writer whirring like a dynamo beneath the ground.

The musical debuted in St. Petersburg before moving to Moscow.

Despite some snootiness, the musical has a good reception and has had no trouble filling the huge Teatr Russkaya Pesnya on Olimpiisky Prospekt.

Much of that is down to a stellar cast, which includes Anastasia Makeyeva, who played the physically demanding role of Roxie Hart in last year's Moscow production of "Chicago," giving 160 performances in 5 months.

The show does, however, lack a live orchestra, which accompanied the show in St. Petersburg.

"If our Moscow audiences love us after the run, we will perform the show on the Moscow stage, organize a Moscow casting and work with an orchestra," said Afanasyeva at a press conference for the musical.

The recordings were subject to teething problems at one Moscow performance, when a duet between the Master and Margarita had to be performed without accompaniment, and was then resung once the technical hitch had been resolved.

Six librettists worked on the project, including Sergei Shilovsky-Bulgakov, whom the show's website lists as the grandson of Mikhail Bulgakov.

This claim has come under fire by some who point out that Bulgakov died without children. Instead, Shilovsky-Bulgakov is the grandson of Bulgakov's third wife, Yelena Shilovskaya. 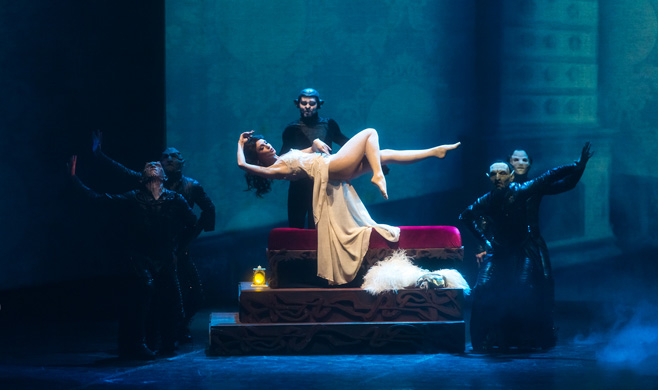 The Master and Margarita Musical

Bulgakov's novel is considered by many to be one of the century's best.

There is no actual nudity in the musical, but the costumes and dancing tread a thin line between sexy and family-friendly. Behemoth, the black cat and aide to the devil, is accompanied by a gaggle of salacious and PVC-clad kittens.

When Margarita appears as a hostess at Satan's ball, she is in a transparent cream-colored dress. Still, that is more demure than a Russian television version, which had Margarita flying around naked on a broomstick. The almost-naked Margarita in the musical does not use a broomstick and instead flies thanks to lifts by other dancers.

The simple love story between the Master and Margarita has expanded to include Woland pining after Margarita. A critic at the Metro newspaper commented that it was unusual that Shilovsky-Bulgakov authorized such a leap from the original plot. "I had some doubts in this respect, but since the central idea has not been harmed by it, we can think of this as an idea which our audience can make up their own minds about," Shilovsky-Bulgakov told Metro.