Art lovers have the chance to enjoy a free English-language tour at the Pushkin Museum of Fine Arts as British art historian Ruth Addison takes people round an exhibition devoted to two of the most interesting Russian avant-garde artists, Alexander Rodchenko and Varvara Stepanova.

"When people think of the Pushkin Museum they just think 'impressionists and plaster casts' but there is actually so much more," said Addison, calling the Rodchenko and Stepanova exhibition "fantastic."

The exhibition "At Home With Rodchenko and Stepanova" marks 120 years since Stepanova's birth. Many of the works on show were given to the museum by the family of the artists, who were husband and wife.

"They [Rodchenko and Stepanova] are incredibly important to the Russian avant-garde and a cauldron of creativity," said Addison. 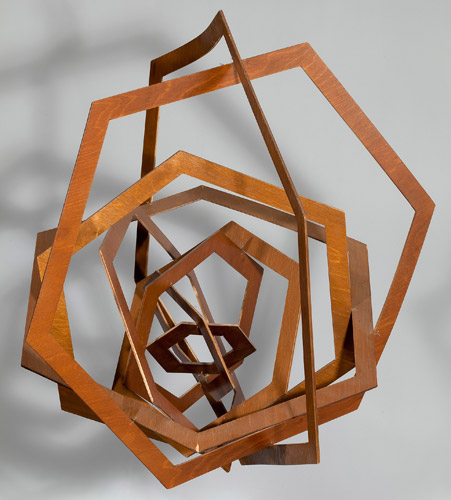 The 250-strong collection looks at their work and their role as teachers. Paintings, drawings, photographs and personal effects, from both artists, cover the period from 1910 to the mid-1930s following the couple's creative journey from symbolism, through abstract-geometrical painting and drawing, to constructivism.

"Both trained as painters, they were among the most tenacious of the avant-garde in moving away from depiction to making objects. They were involved, together and separately, in graphic design, theater design and industrial design, and both taught at the legendary Vkhutemas [Higher Art and Technical Studios] in the 1920s," said Addison.

"Rodchenko is best known for his photography, but this exhibition gives a much broader view of the artist, including both early and late paintings and his 'spatial object' sculptures," she said. "Stepanova was rather overshadowed by the other artists of the avant-garde, but at the Pushkin Museum visitors have the opportunity to see a wide range of her work — the paintings resulting from her research into biomechanics, how the human body moves."

The tour is also an opportunity to socialize and get to know other people in the city. In the tours that she has led before, Addison said she spends an hour talking to the group about the exhibition and the next hour chatting. "We might make Thursdays a special day for expats, as there is not much organized for expats in terms of cultural things to do. There are lots of meetings in bars, but you can only go for drinks in 'bar X' so many times," she said.

There is no extra fee for the excursion, which is included in the entry ticket like other Friday cultural events at the Pushkin Museum. Tours and lectures in Russian are also on Friday at the museum, as well as a series of concerts.

The museum sees the tours as a way to show that foreigners are welcome in the museum despite geopolitical tensions. 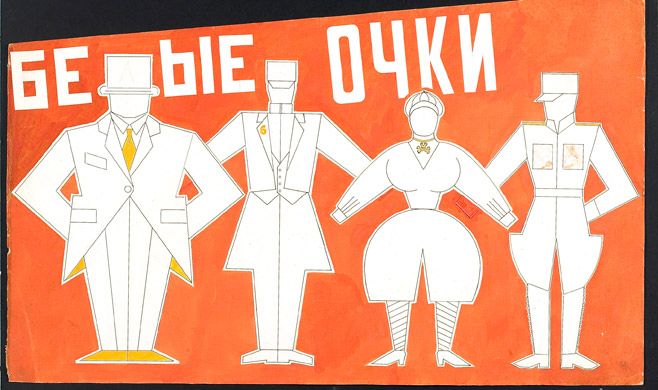 A 1923 Stepanova design for the play "Through Red and White Glasses."

"We wanted to unite people despite this awful political situation," said museum spokeswoman Ulyana Dic. "We are very happy to see expats in our museum and so we wanted to do as much as we can to make it comfortable."

In April, the museum will organize a tour of the exhibition "Paper Architecture," led by curator Yury Avvakumov, an architect himself who coined the term "paper architecture." This small but unique Soviet phenomenon refers to the practice of drawing imagining buildings and structures, even though the designs had no chance of ever being built because they were too far from what the Soviet state needed. Nevertheless, these architects submitted their ideological dodgy designs to architectural competitions, many of which they would win.

The museum hopes that British photographer James Hill, who works with The New York Times and lives in Moscow, will give a talk about his photo series of World War II veterans taken on Victory Day. Another possible talk is from contemporary artist Olga Chernysheva, whose multimedia portfolio focusing on everyday life in post-Soviet Russia was recently exhibited at Pace Gallery in London.

Going to the Pushkin Museum once is not enough, Addison said. "If you live here, there is always more to see."

Ruth Addison's talk on "At Home With Rodchenko and Stepanova" is at 7 p.m. on Friday. Pushkin Museum of Fine Arts, Museum of Private Collections. 495-697-1610, arts-museum.ru, artprivatecollections.ru. The exhibition runs until March 29.