The 21st running of the Golden Mask Festival is as big and sprawling and time-consuming as it has ever been. The days of the Golden Mask as a localized opportunity to showcase and honor some of the best theater from the previous season is long gone. It is now a big business operation.

As has become customary, it comprises several festivals within the festival — including Mask Plus and Russian Case non-competition offerings — as well as forming the basis for compact festival tours that later travel to various Russian and foreign cities. The Context program presents foreign productions in Moscow, while Mariinsky Premieres in Moscow is a commercial endeavor that allows new shows from that world-famous opera and dance house to be performed in the capital city.

Always seeking to be innovative, the festival this year offers a new idea on a small scale: Golden Mask in Cinema. Thanks to it, four nominated productions will be simulcast to movie theaters across Russia. Some showings have already taken place, but all four can still be seen if a movie theater in your Russian city has signed up to the project. The productions being broadcast live are Declan Donnellan's "Measure for Measure" (Saturday), Andrei Moguchy's "The Tsar's Bride" (April 4), "An Evening of Ballets by Jiri Kylian" (April 18), and Vyacheslav Samodurov's ballet "Colordelic" (April 11 and 26). 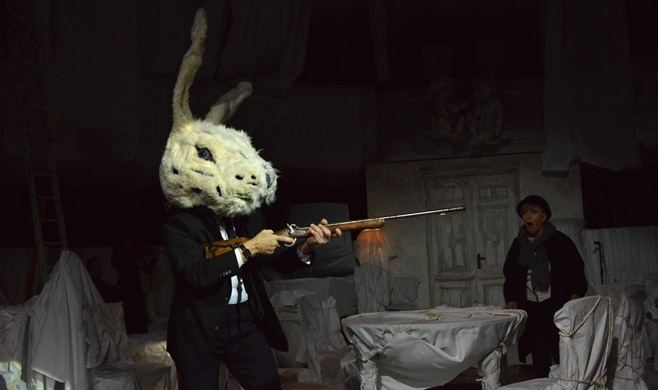 Some sense of tradition is left, however. While numerous ballet and opera productions nominated for awards have already played because they do not fit the time-honored three-week festival run from late March to mid-April, all but one dramatic production — the Theater of Nations' "Gargantua and Pantagruel" — will be on tap during that period. Andrei Moguchy's "Alice" for the Bolshoi Drama Theater of St. Petersburg plays for the last time during the festival on Thursday at the Amedia film studio No. 13.

The numbers, as always, are impressive. Nineteen dramatic shows, which originally premiered in the 2013-14 season, are nominated in two categories — large-form and small-form productions. Including five shows nominated in the Experiment category, we are presented with 20 individuals nominated for best director. Konstantin Bogomolov is nominated twice, once for "Gargantua" and again for "The Karamazovs" at the Chekhov Moscow Art Theater.

Among these directors there is a decent balance of new and old faces, although if past is prelude to future, veterans of Golden Mask competitions have an advantage over those making their first appearance.

Marfa Gorvits, one of three women nominated, received her first nod for a production of "Cinderella" at Moscow's Praktika Theater. Alexei Kriklivy makes his festival debut with a version of Leo Tolstoy's "The Kreutzer Sonata" for the Globus Theater of Novosibirsk. Semyon Alexandrovsky is not exactly a newcomer — he was nominated in tandem with Dmitry Volkostrelov last year for a show they mounted jointly — but his nomination for "Presence" at Moscow's Taganka Theater marks his first independent nod. 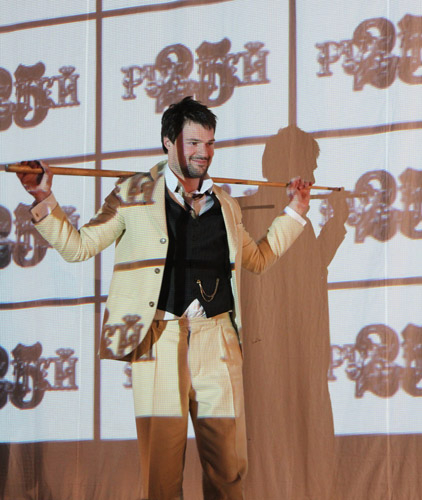 Danila Kozlovsky, star of "Dukhless" is in Dodin's "The Cherry Orchard."

Three foreign directors, two of whom work regularly in Russia, were nominated for the first time.

Andreas Merz, from Germany, is represented by his production of "Agreed/Not Agreed" for Theater-Theater in Perm. The Swiss-born Italian director Guiliano di Capua — who was educated in, and is based in, St. Petersburg — is tapped for his production of "A Life for the Tsar" at St. Petersburg's Teatro di Capua. World-renowned Canadian director Robert Lepage is tapped for an award for his Russian directing debut of "Hamlet/Collage" at the Theater of Nations.

Declan Donnellan, the famed British director who is no stranger to the Golden Mask competition, is participating with his production of Shakespeare's "Measure for Measure," a joint product of Moscow's Pushkin Theater and Donnellan's Cheek by Jowl company.

Many familiar names fill out the list of nominees, including St. Petersburg's Lev Dodin ("The Cherry Orchard," Maly Drama Theater) and Yury Butusov ("Three Sisters," Lensovet Theater). Mikhail Bychkov, a frequent nominee, is up for his rendition of "City Day" for the Voronezh Chamber Theater. Kirill Serebrennikov ("The Martyr," Gogol Center), Genrietta Yanovskaya ("You Don't Part With Those You Love," Moscow Theater Yunogo Zritelya), and Sergei Zenovach ("Notes of a Dead Man," Studio of Theatrical Art) are all Moscow-based directors who have been nominated numerous times in the past.

One might expect that Timofei Kulyabin's production of "KILL," a version of Schiller's "Love and Intrigue" for the Krasny Fakel Theater of Novosibirsk, will attract particular attention. Just weeks ago Kulyabin was taken to court by the state for his production of the opera "Tannhauser," which detractors claimed "offended the beliefs of the religious." After the incident made international headlines, the judge threw the case out of court for lack of evidence of a crime having been committed, although the state is appealing that decision.

In addition, at least four additional jury prizes will be announced at the awards ceremony on April 18, which will be held this year at the Stanislavsky and Nemirovich-Danchenko Musical Theater. These awards are usually made for notable work or performances that were not recognized in the original nominations. On occasion a jury prize will go to a performer or show of note that lost out in a tight field of competition. 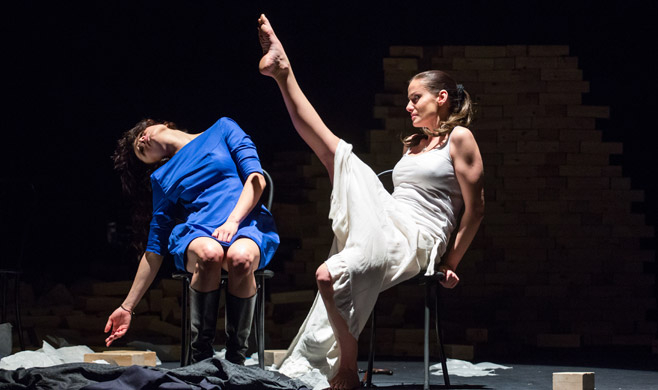 Two theaters lead the pack in terms of total numbers of nominations. The Bolshoi Drama Theater of St. Petersburg and Moscow's Theater of Nations could each win a total of nine awards if they were to sweep. Each theater has two shows nominated and each is heavily nominated in almost all of the categories.

It is worth noting that Maria Revyakina, the general director of the Golden Mask since 2004, has, since 2012, doubled as the managing director of the Theater of Nations. To my knowledge, however, no one has ever questioned whether this may be a conflict of interest.

Other venues hauling down large numbers of nominations include Dodin's Maly Drama Theater and Serebrennikov's Gogol Center with seven nods, and the Chekhov Moscow Art Theater with six.

The geographical breakdown continues a trend we have seen in recent years, with Moscow and St. Petersburg grabbing the greatest number of nominations. This year just four other cities are involved — Novosibirsk with 2 nominations, and Voronezh, Perm and Yakutsk with one each. Moscow has a total of nine dramatic shows nominated, while St. Petersburg has five.