The Kaluga region, an hour's drive southwest of Moscow, has become a haven for investors. International giants in industries ranging from automotive to pharmaceutical have built plants, trained and employed thousands of locals, and turned a once-depressed region heavily dependent on federal subsidies into a donor to the national budget.

Many credit Kaluga's economic miracle to Anatoly Artamonov, 62, who is regularly named among Russia's best governors in different rankings. Artamonov comes from a peasant family. He graduated from the Moscow Institute of Agriculture Production Engineers, then climbed the ranks from heading a Soviet collective farm to being elected Kaluga governor in 2000. He has since been re-elected once, and — after elections were scrapped — twice nominated by President Vladimir Putin to remain in the post, most recently in 2010.

The Moscow Times sat with Artamonov earlier this month to discuss investors' moods during Russia's ongoing economic crisis and political clash with the West, his techniques for fighting bureaucracy and corruption, and the human capital challenges that came with the influx of foreign businesses to his region. 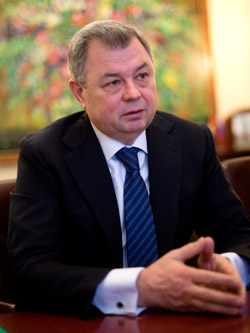 Q: What is the story of Kaluga's economic success?

A: After [Soviet leader] Mikhail Gorbachev launched his peace initiatives and our country cut defense spending, Kaluga's weapons-making factories lost most of their orders and money. Defense enterprises accounted for 60 percent of the region's industrial output, and in the local capital Kaluga they dominated with 80 percent.

Company bosses didn't know what to do. Workers sometimes got their salaries with an eight-month delay.

There was an obvious solution — to develop other sectors of economy, whose products would be in demand on the market. For that, it was necessary to attract investors to create new enterprises.

At that time, in the early and mid-1990s, there were very few investors inside Russia, and there was almost no experience among Russian businessmen of investing in production — we had all got used to state investment. Private businesses at that time were mainly involved in redistributing former Soviet assets and would not invest in developing them.

So a team of the region's managers started traveling to different countries to learn what we could do to attract foreign investors to Kaluga. We went to the United States, nearly every European country, China, South Korea. And everywhere businesspeople named the same reasons for being scared to work in Russia.

Rampant corruption was the first. It is impossible, they said, to talk straight to officials about getting land for construction or access to utilities. You had to find out how to deal with these officials privately, and foreigners were not used to that and didn't like it.

The second reason was the difficulty of accessing infrastructure, which required too many formalities and permits from utilities companies.

But the worst thing singled out by the foreigners, worse even than corruption, were our cumbersome and slow bureaucratic procedures.

Back in Kaluga, we decided to address the infrastructure problems in the most tried-and-true way, by building industrial parks. We prepared the first plot of land, some 60 hectares near the town of Obninsk, provided it will all possible utilities, built a road to it and opened it for investors. Today, we have created ten industrial parks and one special economic zone, which together cover about 5,000 hectares.

The first company to arrive was Serbia's Hemofarm, which built a pharmaceutical factory. Then others started coming. Today, companies from 30 countries run their projects in our region.

Seventy-six new factories have been launched in Kaluga since 2006, and 12 new industrial enterprises in 2014 alone. Annual investment in the regional economy has risen to above $2.5 billion.

Q: Rewind back to the late 1990s. Infrastructure seems to have been the most straightforward challenge. How did you approach corruption and red tape?

A: While working on industrial parks, we created in 1997 a special council for public hearings of investment projects.

Senior representatives of federal and regional government agencies and municipalities, as well as officials from utilities companies, would sit with investors and discuss their projects in my presence. If there were questions, they had to be solved during one session.

When everyone had agreed on a project, I would pass round a written agreement and demand that everyone sign it. I would sign it last.

After this I told the participants: You are the generals. You approved the project. Now your sergeants should not harass the investors as they go ahead with it.

We found a common language very quickly because it was clear to everyone that no one was pursuing their own interests but were working to develop the region.

Yes, there were attempts at the very beginning to extort bribes from investors by lower-ranking officials. But believe me, they were slapped on the wrist so cruelly by their superiors that no one else wanted to follow suit.

Now, several years on, meetings with investors are not as formal. We just gather and listen to investors' presentations. Then — and it is enough for me if an investor brings me his project on a single sheet of paper — I sign a permit to start construction on a selected site.

Q: And how do you deal with law enforcement agencies, the siloviki, who are responsible not to you, but to the federal government?

A: Siloviki will listen to you only if they see that you are absolutely honest and clean, that there is nothing that you can be nailed for. If you lie with your face in the trough, they won't listen.

Q: Do you hang any non-business obligations on your investors?

A: We don't insist that they finance sports teams or employ, say, certain people.

All we demand from them is to pay taxes according to Russian law and pay decent salaries to their employees.

Q: How do you address the problem of a heavy tax burden?

A: We give investors tax breaks, but this can only be done with regional taxes. Then, after they launch production, we try to cover our own spending on industrial parks through tax increment financing.

Last year we launched a special economic zone in the region, where investors get federal tax breaks.

President Vladimir Putin last year ordered that regions which built industrial parks receive partial compensation, so we will get some money back eventually.

Q: In terms of human capital, how prepared was your region for this inflow of new jobs?

A: When foreign investors moved in, the lack of qualified personnel to work at their factories was a serious problem. Even workers from the Soviet-era defense and hi-tech enterprises were not fit to operate modern production lines, lacking the necessary skills and qualifications.

What did we do? We went to a Volkswagen plant in Germany and asked them to show us how they train their personnel. Then we built a similar training center at home.

Over 12,000 qualified workers have graduated from the center and are employed at an automotive cluster that we built from scratch. Along with Volkswagen, we have Volvo, Renault, Peugeot-Citroen and Mitsubishi factories in Kaluga.

We educate engineers for these factories at our local branch of the famous Bauman Moscow State Technical University. We changed its curriculum, and now students are trained both in classrooms and at the plants — where they all get employed upon graduation.

The results are excellent: Today our Volvo plant has only one expat on site, and everything is done by local specialists. Indeed, Volvo and other foreign companies send our specialists to work at their facilities abroad.

The Volkswagen plant plans to have only few expats by 2017.

We have also started training specialists for our pharmaceutical cluster in a similar manner.

Q: What will your administration do in the climate of economic sanctions and political friction with the West?

A: We will continue with the same policies, concentrating on how to create even more attractive conditions for business. My colleagues and I are analyzing what kind of hurdles for businesses still remain in the Kaluga region and we will be clearing them.

We work closely with the investors that are already with us, and some of them — like Magna, Volkswagen and Nestle — are even now expanding their projects. We are also talking to new companies, inviting them to the region and showing what we have to offer.

What unpleasantly surprises me and what hinders new investment in Kaluga is that some foreign governments are harshly warning their businesspeople off working with Russia, at least for now.

Russia is often described abroad as an authoritarian country with many restrictions. To this, I can answer that I can go anywhere, meet anyone and discuss business at home and abroad. I don't need to ask permission from anyone.

Russian businessmen can travel freely abroad and invest there without asking for permission from the Russian government.

Governments come and go, and any official is a temporary person.

Business is something you build or inherit from your parents and grandparents. If someone creates problems for it, business walks away, and the problems stay with those who hinder business.

Sanctions and counter-sanctions hurt Russian businesspeople too, and they talk about it freely. I am confident that our government will take steps soon to help them.

When I talk to foreign investors over tea, they resent that their governments tell them sternly what to do and what not to do in Russia.

Nabi Abdullaev is Partner for Russia and CIS at Control Risks, a global risk consultancy. He is a former chief editor of The Moscow Times.  @NabiAbdullaev

Nabi Abdullaev is Partner for Russia and CIS at Control Risks, a global risk consultancy. He is a former chief editor of The Moscow Times.  @NabiAbdullaev

Emmanuel Quidet, president of the French-Russian Chamber of Commerce and Industry and a partner at auditing firm Ernst & Young, has been working in Russia...
'no pressure'

Moldova is in a state of emergency after Russia's state-controlled energy giant Gazprom hiked gas prices.
arms from abroad

Kiev hailed this week's court decision to return a priceless collection of Crimean gold to Ukraine as a victory over Moscow.