Amal Allamama, a refugee from Syria, and her daughter Selma Kutaefan are studying Russian in a small flat that work as both a school and community space for refugees in Moscow.

In the kitchen, a Congolese family are playing. The table is covered with paper, pencils, puzzles and biscuits. Sayna Mirzadakha, an economics student from Afghanistan, rushes through the door for her English class.

A second home for many when they first arrive in Moscow, the Learning Center for Refugee Children aims to help children settle into the Russian school system and Muscovite life by providing extra tuition and a supportive community.

"The whole school is based around friendship," said Olga Nikolaenko, director of the center. "It is important for the children to feel at home and we try to create a learning experience that is pleasant and interesting."

The center was founded in 1996 after the first refugees from war-ridden Chechnya fled to Moscow and found that their children were barred from schools because they had no local registration. The center offers its services to over 70 children today from many different countries, including Afghanistan, Syria and Congo.

Center employees encourage people to call the center a school. That is important, said Yekaterina Kokorina, former center head, as "going to school" means that a child has a normal life.

Most of the students find the center via the Civic Assistance Committee, the oldest Russian civil-society organization, which provides legal, social and humanitarian support to refugees. When she arrived from Afghanistan, Bakhdara Sibgatulla went to the committee and was helped with her documents and told that her daughter Ranah could take lessons at the center. "For all professions, it is very important for Ranah to study English," she said. "She was scared at first but she now loves the lessons and her teacher and hopes she won't leave soon."

Australian Jennifer Millar started teaching at the center late last year. "It has been an eye-opening experience," she said, and "An opportunity to find out about the city and an insight into the lives of Muscovites that you wouldn't normally interact with." 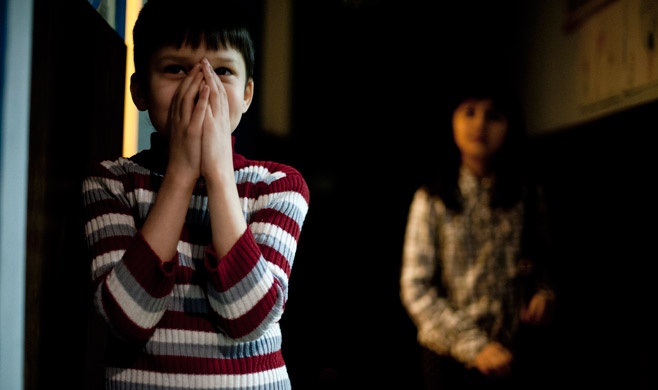 The center was set up in 1996 to help children from war-torn Chechnya.

Kokorina, who still works at the center, encourages anyone with a "good knowledge of English" who is "keen to work with children" to get in touch.

Millar had taught English prior to working with the refugee children but did not think that lack of experience should be a deterrent: "It is a perfect place to start teaching, as the atmosphere is encouraging and relaxed."

Most of the children who attend the center study Russian, as this is essential for students to get into the school system. The Moscow education department has a network of Russian language schools for migrant children, which take students for one year on a full-time basis. But these schools are not able to accommodate all the children that need support.

"It can be challenging finding out what will make students excited and want to learn and also to hear stories of how people of certain races are victimized in Moscow," Millar said. "But it is also a privilege to be able to listen and help in a small way."

The center wants to expand its activities to offer a youth group where teenagers and young adults can get support from peers and talk about social issues, Nikolaenko said. "Learning the language and getting into school is just one aspect [of adaptation]," she said.

Aminat Soltakhanova came to the center during the second Chechen War with her siblings. She went on to graduate from the Moscow State University and now works at the center as an administrator. "It is hard to measure to what extent it is due to us that the children succeed or improve, but we are committed to working with and welcoming anyone who wants to come," she said.

To get in touch and find out more go to refugee.ru/refugee-kids or contact Olga Nikolaenko: olga.nikolaenko@hotmail.com. +7 915-034-7772.