Season 3 of the immensely popular U.S. television series House of Cards has seen its plot shift to Washington's relations with Russia, referencing scores of Moscow policies — and even appearing to plant an allusion or two to the Ukrainian crisis.

At a time when Russia makes headlines almost every day over its involvement in Ukraine and standoff with the U.S., fiction and fact seem closer than ever.

But how do Russian events and personalities in the show square with their real-life counterparts?

A short answer: It's a loose match.

The show borrows heavily from recent developments, but adds a heavy dose of fiction. More notably, the script for Season 3 was written before the conflict in Ukraine became major news and the show includes no reference to the conflict or Moscow's role in it, though it does seem to plant a couple of veiled hints.

Spoiler alert: If you haven't seen Season 3 yet, now is the time to stop reading.

For one, the character of Viktor Petrov and real-life Russian President Vladimir Putin share the same initials: V.P.

But there are more indicators that Petrov is a stand-in for Putin. Petrov is prone to manly antics, has a reputation for being authoritarian, and even shares a history of posing shirtless for masculine photos.

There's one striking difference, though: The actor playing Petrov's part, Lars Mikkelsen, is about 22 centimeters (8.7 inches) taller than Putin, according to published data, and towers over his entourage in the way the real-life Russian president hardly ever does.

In the show, U.S. First Lady Claire Underwood — portrayed by Robin Wright — asks Petrov during a state dinner at the White House: "Viktor, tell me: Are you in love?" Petrov responds: "I don't know about love, but I'm learning to enjoy being divorced."

In real life, Putin seems to be rather more romantic — and more reserved. Little is known about his love life since he announced his divorce from then wife Lyudmila in 2013.

"I recently had a conversation with a friend of mine from Europe," the real Putin told a reporter who asked him about his love life during a news conference last December, according to a transcript published by the Kremlin.

"He asked: 'Listen, is there love in your life? Is there anyone you love?' I said, 'Well, sure.' 'And does someone love you?' I replied 'Yes.' He must have thought I was being neglected. So he said 'Thank God,' and drank a shot of vodka."

Putin also praised love — including "love to the family, to the children, to the motherland" — as the "meaning of our whole life and existence" in another speech last fall, according to state-run RIA Novosti news agency. The president has always maintained that he has a "warm relationship" with his ex-wife.

Takeaway: If Petrov wanted to stay closer in character to his real-life inspiration, a discourse on his love for the motherland — preferably accompanied by a patriotic quote from a 19th-century Russian writer — would have been more appropriate. 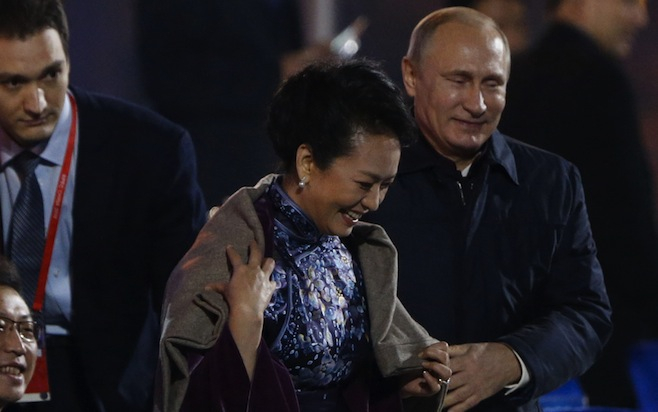 In one of the most talked-about scenes in the show, Petrov plants a long kiss on the lips of the U.S. first lady, as husband Frank looks on, astounded.

Putin's unorthodox behavior toward first ladies and female heads of state are slightly less crude. At an APEC summit last year, Putin placed a shawl over the shoulders of China's First Lady Peng Liyuan, a gesture he had earlier practiced on German Chancellor Angela Merkel.

But while Putin's gestures have been scoffed at by some as diplomatic gaffes, they are very much in line with Russian men's idea of gallantry.

Takeaway: Petrov's brutal overture is a far cry from Putin's attempts at chivalry. 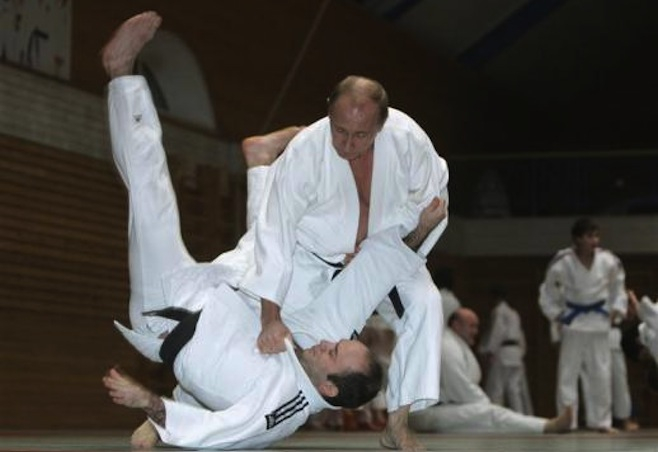 'I slit his throat'

In the show, Petrov brags of having killed a man with his bare hands while serving for six months as a KGB agent in Afghanistan in his younger years.

"We were ambushed by the Mujahideen," Petrov tells Underwood. "And the man who shot me here and here," he says lifting up his shirt to show his scars, "he stabbed me when his rifle jammed. I pulled the knife away and slit his throat."

In reality, Putin, a former KGB lieutenant colonel, spent five years in east Germany, and the stint was, by all public accounts, uneventful. And despite Putin's penchant for macho stunts — flying a fighter jet, shooting a whale with a crossbow for research purposes, and demonstrating his judo skills — there is no indication of him having ever killed anybody in close combat.

Takeaway: Petrov and Putin show significant biographical differences, even though both have served abroad as KGB agents.

'Russians Don't Abandon Their Own'

The show makes no direct reference to the crisis in Ukraine, and the script for Season 3 was reportedly written before fighting in eastern Ukraine between pro-Moscow separatists and government forces broke out.

There are, however, at least two scenes where the show seems to allude to Ukrainian events.

In one scene, U.S. cabinet members listen to a Russian television broadcast of Petrov's speech about a crisis in the Middle East, which he concludes with the words: "I am Russian, and Russians don't abandon their own."

In reality, that line has emerged as a popular slogan among pro-Kremlin nationalists who defend Moscow's meddling in Ukraine by appealing to the interests of Russian speakers there.

Takeaway: The show uses a Russian catchphrase from the Ukraine conflict, but places it in the context of another crisis in a different part of the world.

In the show, Claire Underwood warns her husband to be careful while he is contemplating a deal proposed by Petrov. "Francis, he's a thug. He smart, but he's still a thug. Don't cower to him," she says.

Takeaway: The show's description of Petrov uses the same strong term that has also been applied to Putin. But was it an allusion to the Ukraine crisis? The jury is still out on that one.

One aspect of Russian politics featured extensively in the show is the internationally criticized ban on materials promoting "non-traditional sexual relations" among minors, also known as Russia's "gay propaganda" law.

In the show, the Underwoods try to negotiate the release of an American citizen who is among several activists detained for violating the "gay propaganda" ban by participating in a rally in support of gay rights.

The U.S. prisoner tells Claire that a fellow gay rights activist, a Russian man, died in custody after a 28-day hunger strike.

In real life, however, violations of the law are punishable by a fine, while foreigners may also face up to a 15-day "administrative arrest," followed by deportation.

Takeaway: Russia has seen a series of violent attacks against LGBT people since the law was passed and people have been known to have lost their jobs for being gay. But a lengthy jail term for showing up at a rally for gay rights? That, at least so far, is fiction.

In the show, Petrov demands from Underwood that NATO scale back its missile defenses in Europe, dismissing Frank's objections that the system is there "to defend against North Korea, against Iran."

The missile defense is "far closer to my borders than theirs," Petrov counters, a worry shared by many Kremlin officials in real life.

In real life, critics have accused Russia of fueling conflicts in the Middle East by, for example, hosting Hamas leaders in Moscow and supplying weapons to Iran and Syria. 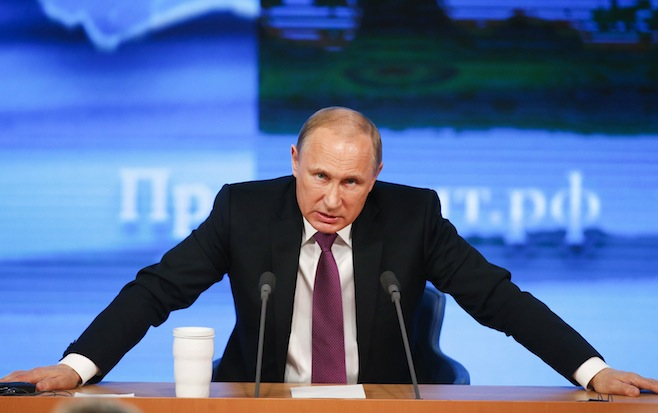 In the show, Claire Underwood accuses the Federal Security Service, or FSB, of a history of duplicitous and violent tactics.

"The FSB has conducted these sorts of operations before," Claire says. "The apartment complex that blew up — Petrov used that to justify invading Chechnya. The opera house that was gassed — he removed all provincial governors after that."

In real life, the second war in Chechnya that began in 1999 was prompted by a series of bombings of apartment buildings Moscow and other cities and a Chechen rebel incursion into Dagestan — a neighboring Russian region.

Some critics — most notably former FSB officer Alexander Litvinenko, who was killed by polonium poisoning in London — have accused the FSB of having staged the apartment building bombings.

Putin also scrapped popular elections of regional governors in 2004 after a terrorist attack. But the incident that prompted the move was not the gassing of an opera house, nor the major hostage-taking crisis at a Moscow theater in 2002, but a terrorist raid on a school in Beslan, in Russia's republic of North Ossetia.

Takeaway: Claire makes a decent summary of the links between some major events in Russia's recent history, but she gets some of the details wrong.

In the show, members of the Pussy Riot punk rock group, Nadezhda Tolokonnikova and Maria Alyokhina, along with Tolokonnikova's husband Pyotr Verzilov, make cameo appearances as guests at a White House dinner in Petrov's honor.

In real life, Tolokonnikova and Alyokhina served 18 months in jail for performing an anti-Putin song in a Moscow cathedral. They would be unlikely to receive an invitation to a White House dinner with Putin — partly because they might be inclined to make a toast similar to the one they make in the show:

“To Viktor Petrov, whose loyalty runs so deep he's given his friends half the country. Who is so open to criticism that most of his critics are in prison. To Viktor Petrov, the commander in chief, who is not afraid of anyone — except gays.”

Russia's UN delegation has blocked a request by the producers of "House of Cards" to use its New York headquarters as the backdrop to two episodes...
news

Aaah, the APEC summit. An occasion for heads of state to meet and mingle, making their every handshake a news story.
news

Two members of the punk-rock protest group Pussy Riot will have a part in the hit U.S. television show "House of Cards," a newspaper in Baltimore...
'REFERENDUMS'

Kremlin-installed authorities were already claiming victory Tuesday in annexation votes in Ukrainian regions under Russian control, as Moscow warned it...