Thousands of Russians, many carrying red carnations, queued on Tuesday to pay their respects to Boris Nemtsov, the Kremlin critic whose murder last week showed the hazards of speaking out against Russian President Vladimir Putin.

Aides to Putin deny any involvement in killing Nemtsov, who was shot in the back four times on Friday within sight of the Kremlin walls. Nemtsov's friends say he was the victim of an atmosphere of hatred whipped up against anyone who opposes the president.

"The shots were fired not only at Nemtsov but at all of us, at democracy in Russia," Gennady Gudkov, a prominent Kremlin opponent, said in a speech delivered next to the coffin.

"We never thought this could happen, but it did. Rest in peace my friend, your work will be continued."

Nemtsov, a former deputy prime minister, was the most prominent opposition figure to be murdered in Russia during Putin's 15-year rule.

In a gesture of conciliation from the Kremlin, Deputy Prime Minister Arkady Dvorkovich joined mourners filing into the hall where his open casket was on display. Dvorkovich, from the Kremlin's increasingly sidelined liberal camp, was carrying a bunch of red flowers.

For the most part though, the mourners were die-hard Kremlin opponents who feel deep alarm at Nemtsov's killing but who represent only a minority of the Russian population. Polls show most Russians support Putin, despite a plummeting ruble and international sanctions over the Ukraine crisis.

Nemtsov's coffin stood in the center of a hall at a human rights center named after Soviet dissident Andrei Sakharov. The casket lid was partially open to reveal his head. Photographs of the 55-year-old hung on the walls, and sombre music played.

Nemtsov's mother, dressed in black, stood stooped over the coffin. His ex-wife, Yekaterina Odintsova, with a black headscarf pulled over her blonde hair, stood nearby. Nemtsov is to be buried later on Tuesday at a cemetery on the outskirts of Moscow.

The queue of people waiting to go in stretched about a kilometer in the streets outside the hall.

"He was our hope," said Tatyana, a pensioner queuing to pay her respects. "I feel like Putin killed me on the day he died. This last year has been full of suffering."

Naina Yeltsina, the widow of former Russian President Boris Yeltsin, who brought Nemtsov into his government in the 1990s and briefly viewed him as a potential successor, was among the mourners.

Former British Prime Minister John Major was present but Poland said the speaker of its upper house of parliament, Bogdan Borusewicz, was prevented from attending because Russia would not issue him with an entry visa. Latvia said its former foreign minister, Sandra Kalniete, was also denied entry. 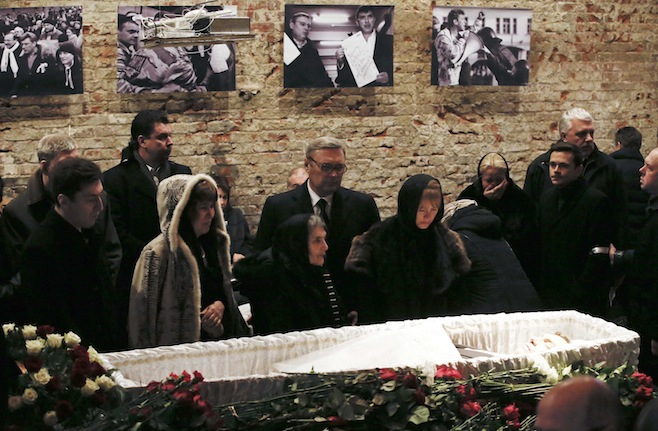 The killing of a leading opponent against the backdrop of the Kremlin, in an area closely watched by the security services, has been deeply awkward for Putin.

Russian government officials have said they suspect the murder was a "provocation" carried out by Putin's opponents to discredit him.

Sergei Kiriyenko, a former prime minister who now runs the state atomic agency, said it had the hallmarks of a hit ordered by oligarchs who had fallen out with the Kremlin. "It was a political murder," he said. "Think of who benefits."

Russian investigators say they are actively working to track down Nemtsov's killers. The Investigative Committee handling the case said it had obtained closed-circuit television footage from the scene, and scheduled ballistic and medical tests.

Nemtsov's girlfriend, Anna Duritskaya, who was with him at the moment he was shot on a bridge near Red Square, has returned to her native Ukraine, the committee said in a statement. It said she had already given evidence and promised to continue to cooperate with investigators.

The killing may galvanize Russia's splintered liberal opposition, and deepen a sense among urban, middle-class professionals that their country is slipping into a cycle of fear and repression.

But it is unlikely to cause an upsurge of dissent across society. Nemtsov's fierce criticism of the Russian intervention in Ukraine was out of step with the broader public mood, and he was tainted by his time in government in the chaotic 1990s.

Boris Nemtsov Funeral to Be Held Tuesday in Moscow

Murdered opposition leader Boris Nemtsov will be laid to rest on Tuesday at a cemetery in southwest Moscow, a member of his political party has said...
news

Boris Nemtsov's murder is unlikely to unite Russia's opposition factions, whose ideologies have consistently prevented their consolidation into a coherent...
news

Boris Nemtsov's death outside the Kremlin on Friday night reveals the deep sense of alienation between various political forces in Russia and shows...
special tribunal