HOLLYWOOD — “Ida,” Poland’s entry in the 87th annual Academy Awards race, proved to be a formidable opponent for its competitors as it captured the Oscar in the best foreign-language film category Sunday night.

The Academy of Motion Picture Arts and Sciences’ star-studded festivities turned sour for the Russian contingent, including director Andrei Zvyagintsev, who traveled to Hollywood hoping to accept the golden statuette for “Leviathan,” the dark movie which had been hailed as a Russian masterpiece by some critics.

“Ida,” directed by Polish moviemaker Pawel Pawlikowski, tells the story of a young nun in the 1960s who discovers she is Jewish.

Zvyagintsev and “Leviathan” producer Alexander Rodnyansky were the first ones to congratulate Pawlikowski with hearty handshakes before the television cameras at the Hollywood Dolby Theatre, where the ceremonies were held.

The director had said in an interview with Russia’s Komsomolskaya Pravda on the eve of the Oscar ceremony that his film could lose to “Ida.”

“By and large, it no longer matters today if we receive the award or not,” he said. “I am not being disingenuous or modest. The main event has already taken place — there has been a huge interest in our movie in Russia, it is being discussed, it is being argued with. And that makes me happy.”

In a somewhat rambling speech, the Polish director thanked his relatives, co-workers and the Polish crew.

“Ida” had a longer exposure to moviegoers. It was released in the United States on May 2, 2014 in 137 theaters, and has so far grossed $3.7 million. It is also available on DVD and for streaming.

“Leviathan,” by comparison, opened at the end of December in just two movie theaters, and is now in the process of expanding its theatrical reach. It is currently showing in 43 theaters.

Foreign films continue to gain traction in the United States. The motion picture academy considered a record number of 83 foreign movies this year before narrowing down the field to five nominees.

The foreign-language Oscar has been officially awarded to the country of origin rather than to individuals, but for the first time this year the name of the director is on the statuette. 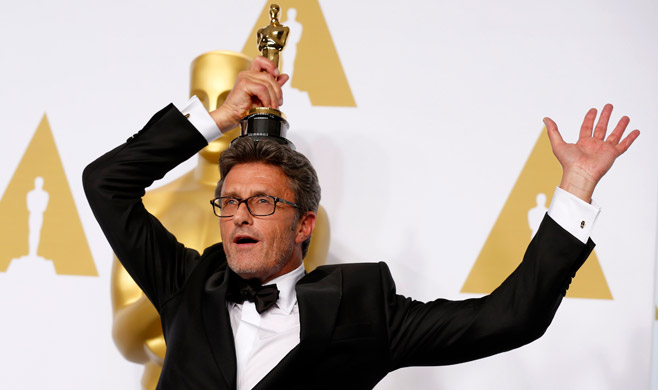 Unlike in the United States, “The reaction to ‘Leviathan’ at home was polarizing, people either loved the film and passionately supported it or hated and denounced it as part of a Western master plan to destroy the Russian nation,” producer Rodnyansky told The Moscow Times.

“But mostly the reaction has been positive, both from the media and ordinary viewers and a lot of people loved the film,” he said. “They saw it not just as a masterpiece of a true Russian artist but also as something that talks truthfully about uncomfortable issues facing our country.”

Because of the awards exposure, “I believe that ‘Leviathan’ will be in theaters for at least a month, which is a big deal in Russia. Traditionally, independent auteurs’ films never stay longer than two weeks on screens,” Rodnyansky predicted.

He said that this film has already received the widest release for an auteur’s movie.

Despite the backlash at home, Zvyagintsev reminded the media of what he described as “amazing support by Western critics, such as 100% rating given by Rotten Tomatoes [a movie website].”

“It encourages us and gives us strength in these uncertain times,” he added.

“What I can say right now is that no matter what our final number will be, the results [so far] are incredible. We have had the best ever first weekend box office for an independent [in Russia],” the film’s producer said.

The Russian director has always insisted that “Leviathan” is an international story. One Mexican journalist told Zvyagintsev that “replace vodka with tequila and put some cactus in the picture and it will be a movie about Mexicans.”

The Academy Award for the best English-language film went to “Birdman.” Best actor and actress Oscars were awarded to Eddie Redmayne for “The Theory of Everything” and Julianne Moore for “Still Alice.”

In the supporting categories winners were Patricia Arquette for “Boyhood” and J.K. Simmons for “Whiplash.” Mexican moviemaker Alejandro G. Inarritu was named the year’s best director for “Birdman.”

The Oscar celebration got under way here Saturday night with more than a dozen parties hosted by various studios and other movie entities. The Russian contingent attended a dinner at a Los Angeles steak house hosted by Sony Classics, which this year represented both Russian and Argentinian pictures.