KIEV — Marina's brother and a close family friend have both been killed on the front line in east Ukraine. Now she has had to say goodbye to her husband, Ruslan, called up to fight pro-Russian separatists in Kiev's latest conscription drive.

"Our family has suffered losses already. My brother died in July. [My daughter's] godfather died in September. That's why we are not afraid anymore, we simply feel pain," she said, bouncing 5-month-old Valeria in her arms.

"It was either serve or go to prison … he's promised to come back," she said, declining to give her surname.

After a series of morale-sapping military defeats in the east, the Kiev government has now made military call-up a solemn fact of life for Ukrainian men and their families.

And resentment from some over being called up and from others that some young people are dodging the draft by leaving the country could yet turn into a fresh challenge for President Petro Poroshenko and his hard-pressed government.

Violence has escalated sharply in the east and the Kiev government has ordered a new wave of mobilization to pull in a further 50,000 troops to counter any new separatist offensive. The rebels have defiantly announced their own conscription effort, aiming to boost their combined forces to 100,000.

Two weeks after receiving the order to enlist, Ruslan and around 50 other conscripts from a Kiev suburb gathered at a rundown military base for enrollment.

In worn, civilian clothes and mismatched camouflage outfits, they posed for photos and embraced family members ahead of a blessing by an Orthodox priest.

Some stood silently, hands clenched at their sides. Others traded jokes and shouted "Glory to Ukraine!" as a full military band played a scrappy rendition of the national anthem.

"We're in good fighting spirits, because if not us, who? There's going to be a big turn-around," 35-year-old warehouse worker Viktor Rybalko said as he carried his belongings onto the bus taking the men to a training camp.

"I don't have any military experience, but I'll learn and then we'll go where the map shows we need to fight."

Pro-Russian separatism erupted in Ukraine's east last April after political upheaval in Kiev led to the ousting of a Moscow-backed president. Poroshenko said he wanted the conflict to be over within weeks, but fighting has raged on, killing more than 5,000 people.

The separatists, fighting for territory the Kremlin calls "New Russia," effectively repudiated a five-month-old cease-fire last month and launched a new offensive that has put Kiev's forces on the back foot.

"How has the government let it come to this? It's a disgrace," said 68-year-old pensioner Valentina Alexandrovna, comparing the impact of the war to the nuclear disaster at Ukraine's Chernobyl power plant in 1986.

"When Chernobyl happened, you couldn't see the danger but it was there. This is the same, the front line is far away but our boys are dying every day," she said, wiping away tears as she waved goodbye to her 26-year-old neighbor.

As of early December, Poroshenko said 1,252 servicemen had been killed since the start of fighting. The latest separatist offensive has pushed that toll higher, with 57 reported killed last week. 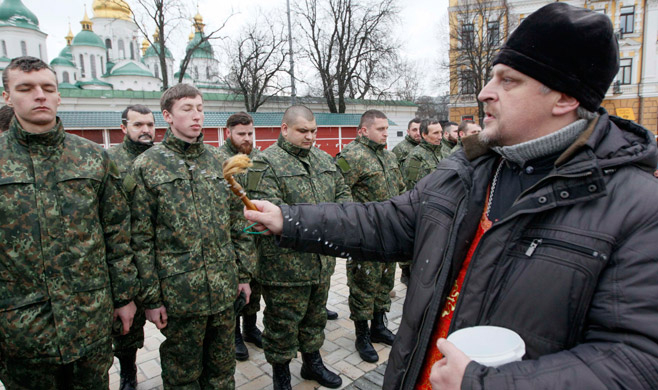 An Orthodox priest blessing members of a Kiev battalion Tuesday before they headed to train for the frontline.

Ukraine's authorities say there can be no military solution to the conflict, but having designated Russia an "aggressor state" the government is determined to strengthen the 200,000-strong army.

Ukraine says the rebels are armed by Moscow and backed by Russian troops, leaving its army heavily outgunned. Western countries say they will not send troops to defend Ukraine, but Washington has been debating this week whether to provide more weapons to Kiev, which has struggled to equip its forces adequately as the country teeters on the edge of bankruptcy.

Amid reports of conscripts fleeing the country to dodge the draft, the government has had to come up with fresh ways to incentivize army service.

"It is every man's duty to defend their nation, their land," Defense Minister Stepan Poltorak said Saturday. "There are cases, not widespread but they exist, of people, who to put it lightly are not patriots, going abroad to avoid service."

In a Facebook post he later deleted, presidential adviser Yury Biryukov said a significant proportion of conscripts in western Ukrainian regions had not turned up.

"According to unofficial sources, hostels and motels in border regions of neighboring Romania are completely filled with draft dodgers," newspaper Ukrainskaya Pravda quoted the deleted post as saying. Biryukov has not since spoken publicly about the post and did not immediately respond to a request for comment.

More than 1,300 criminal investigations have been launched into men suspected of avoiding military service, according to the Defense Ministry.

Poroshenko — whose British-educated son has served for a spell in the east — ordered the government urgently to amend legislation regulating travel by Ukrainian nationals eligible for conscription.

In a bid to spur enthusiasm for front-line combat, the government said soldiers would receive an additional 1,000 hryvnas ($62) for each day spent in active battle.

Servicemen will also receive 12,000 hyrvnas, ten times the monthly minimum wage, for the destruction of an enemy vehicle and 48,000 hryvnas for every tank.

Nevertheless, some trade in falsified medical exemption papers or "white tickets" is under way.

Interior Minister Arsen Avakov said Thursday a regional military commissar had been detained on suspicion of receiving bribes of up to 5,000 hryvnas ($300) in exchange for providing fake medical papers for potential conscripts.

Ukraine and NATO say rebel fighters have been reinforced in recent weeks with more Russian troops, a charge Moscow denies. Peace talks have collapsed and with no fresh negotiations in sight, a cease-fire looks unlikely in the near-term.

Barring exemptions for students, parliamentary deputies and some scientists, any Ukrainian man between 20 and 60 years old, judged fit to serve, could be called up to fight.

In Kiev, the new conscripts pulled off their hats and bowed their newly shaven heads as the priest sprinkled them with holy water. Several of the men, balding or with gray hair, looked close to retirement age.

Afterwards, a poem was read out calling on Ukrainians to love their country "in work, in love, in battle, when artillery shells drone."

Five Ukrainian soldiers have been killed and 27 wounded in fighting with pro-Russian separatists in Ukraine's eastern regions in the past 24 hours...
news

The United Nations on Tuesday sharply criticized both the Ukrainian government and the pro-Russian rebels for turning bus stops, schools, markets...
deep freeze