In March 1944, when the first Soviet liberator set foot on the grounds of Pechora — a Nazi death camp in Ukraine known commonly as the “dead loop” — 6-year-old survivor Aron Zusman locked eyes with the newcomer’s German shepherd.

Zusman was sent to the camp at the age of four. Over the course of more than two years, Nazi guards had made a habit of sicking their own fearsome German shepherds on the young Jewish boy.

“One time, one of the Germans’ dogs locked her jaw around my neck. I was looking up at her, fearing that my mother’s heart would break,” Zusman told The Moscow Times in a phone interview on Monday. “Inexplicably, the dog then opened her jaws wide, letting me go. The Germans beat her horribly after that.”

After all that he had been through, the sight of another German shepherd should have filled little Zusman with horror. It didn’t.

He looked up at the approaching Soviet soldier, and back down at the dog. He knew there was something different about this one. Zusman ran to the canine’s side, showering him with kisses and affection.

On Tuesday the international community honors International Holocaust Day. The holiday was established by the United Nations ten years ago, on the 60th anniversary of the liberation of Auschwitz, the Nazi’s biggest death camp.

This year’s commemoration of the 70th anniversary of the liberation has so far been mired in political controversy, owing largely to diplomatic tension that appears to have inspired President Vladimir Putin to sit out this year’s memorial at the site of Auschwitz in Poland.

But Zusman’s story is a testament to the fact that personal conviction and courage in the face of insurmountable odds shine brighter than political tedium.

The Pechora concentration camp was built on the grounds of an estate that had formerly belonged to one of Poland’s wealthiest, most powerful families. The Potocki-Svejkovsky estate was renovated into a death camp, but elements of its aristocratic past remained. Prisoners toiled among palatial buildings, vast underground cellars, abandoned horse stables and a central courtyard built around a once-sumptuous fountain.

Of the approximately 11,000 Jews that were imprisoned in the camp, some 1,200 survived.

“The Germans would drive through town in these special trucks,” Zusman said of the days before Pechora. “They ordered Jewish villagers to hand over all their possessions, money and gold. They promised to bring them to labor communities, where they would work, but they would be safe and well fed. Most of these villagers soon disappeared.”

Prisoners at the camp starved. Those that survived ate plum pits, or whatever other scraps they could scrape together.

Hitler’s easternmost headquarters, code-named Werwolf, were built 65 kilometers from Pechora, which was located in the modern-day Ukrainian region of Vinnitsya.

Many of Pechora’s prisoners were shipped off to assist in the construction of the site. None of them returned, Zusman said. 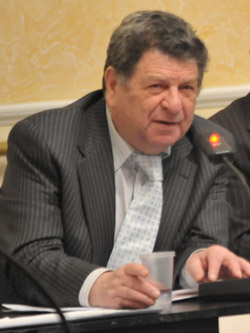 As the Soviets advanced toward Pechora in early 1944, Zusman recalls a time when the German guards parked their trucks around the fountain at the center of the estate, ordering selected prisoners to pile in as they prepared to flee.

“Every time a new truck would approach that fountain, we thought: death is on the way,” Zusman said.

Before the camp was liberated, it was bombarded by a Soviet air campaign. Most of the remaining prisoners took shelter in the cavernous underground cellars. But Zusman and a herd of other little boys tore outside onto the abandoned property, waving their arms, rejoicing.

“We all dreamed of the day we would see those planes overhead, marked with red stars,” he said. “We were totally unaware of the fact that they actually could have killed us in those moments.”

After Pechora’s liberation, Zusman and his mother were quickly confronted with the fact that though the era of Nazi death camps may have ended, vociferous anti-Semitism ran rife in the free world.

The pair returned to their home in the nearby village of Bratslav, only to find that it was no longer their home. It had been occupied by a family who refused to leave.

They took up residence on the porch of his uncle’s home. The interior of the home had been occupied by a former member of the Ukrainian auxiliary police, who refused to vacate upon the prisoners’ return. Members of these auxiliary police forces are reputed to have helped Nazi forces carry out anti-Jewish and anti-partisan operations as they occupied Soviet territories.

Despite his excellent performance at school, Zusman was denied a gold medal, a standard academic honor that would have made it easier for him to enroll in a first-rate Soviet university.

He was advised to go study in Russia due to the abundance of academic hurdles Jews faced in Soviet Ukraine. Unwilling to sacrifice his dream of becoming a doctor, Zusman moved to Leningrad.

He was denied entry into the city’s most prestigious university, settling instead on the Second Medical College. After graduating, he became a neurologist, a profession he remained in for the next 54 years.

Zusman comes from an area with a long history of anti-Semitism. In 1919, his family was targeted in a pogrom. “My grandmother was chopped into two pieces,” he says, a fate shared by his young uncle.

Before the revolution of 1917, Vinnitsya region was the center of the Pale of Settlement, a community established by the Russian Imperial government in a bid to isolate Jews, preventing them from settling in central Russia. As of 2001, Jews comprised less than one percent of the regional population, according to the latest Ukrainian census.

Today, only a few hundred Holocaust survivors remain in Russia, Zusman says, adding that those that do still reside in the country do not receive considerable social benefits.

Zusman now heads the All-Russian Jewish Organization of Former Fascist Concentration Camp Prisoners, an organization established to provide assistance and a sense of community to these survivors.

But the organization has faced difficulty over the past couple of years. It lost its offices due to financial problems, even after they came up with a donor willing to pay their rent. “We could no longer pay the rent. Jewish Cultural Autonomy [a non-profit organization] sent a letter saying they would do it — but this was not enough,” he said.

The Justice Ministry then revoked its license, based on the logic that the organization could not be reached at its registered address. Without a license, the organization can no longer apply for grants or possess a bank account. Today it operates as a non-registered entity.

Despite these challenges, Zusman — who is now aged 77 — continues to face every hurdle with patience and a willingness to persevere against all odds. He is currently in the process of trying to regain his organization’s license.

The head of President Vladimir Putin's administration will represent Russia at events commemorating the 70th anniversary of the Soviet liberation...
Doubling down

Yevgenia Kuzevanova has been raising money to buy everything from first aid kits to instant noodles for Russian forces in Ukraine.  Her online group...